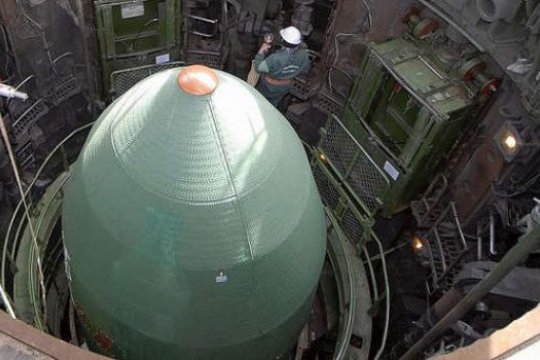 According to Zarif, Israel is the only country in the region with a “secret” and “undeclared” nuclear arms program, which allegedly includes “a real nuclear arsenal.”

That the two countries have been engaged in a long-running cold war is no secret. Long before the 1979 Islamic revolution, the founder of the Islamic Republic of Iran, Ayatollah Khomeini, pursued a clearly anti-Israeli line in his speeches and sermons.

"I consider Israel’s independence and its recognition as a catastrophe for Muslims undermining the activities of Islamic governments," he said over and over again.

"The Zionist regime must be wiped off the face of the earth, and with the help of Divine power, the world will soon live without the United States and Israel," he added.

Today, Iran is the only country that does not recognize Israel’s very right to exist.

In its 70-year history, the State of Israel has fought seven major wars with the Arabs and endless armed clashes with Palestinians and the pro-Iranian Lebanese Hezbollah movement.

Jerusalem’s relations with many Arab states have generally returned to normal and when it comes to the confrontation with Iran, some of them have even allied with the Jewish state. Meanwhile, Iran is now seen by Israel as a major threat.

Israel’s nuclear program was initiated by its founder, Prime Minister David Ben-Gurion. After the end of the Arab-Israeli war of 1948, in which Israel was confronted by the Egyptian and Jordanian armies, Ben-Gurion realized that an atomic bomb was the only way for Israel to survive in the face of the Arab forces that outnumbered the Israelis many times over.

The history of the creation and possession of Israel’s nuclear weapons is interesting per se and reads like a detective story. What is really important, however, is Israel’s ability to obtain nuclear capability in a short time and virtually without conducting any nuclear tests [1]. These days, the expertise gained over decades and the high performance of modern supercomputers make it possible to create realistic mathematical models of nuclear and thermonuclear warheads, which, in turn, makes it possible to avoid detonating a nuclear charge at a test site.

All this being said, however, Israel strictly adhered to the policy of “positive disguise” refusing to recognize the existence of its nuclear arsenal, hiding direct evidence of its existence and making veiled hints about its existence as a warning to enemies. Former Israeli prime ministers have made such hints more than once. In July 1998, Shimon Peres publicly admitted (without elaborating) that Israel possessed nuclear weapons. Ehud Olmert also indirectly confirmed that the Jewish state had an atomic bomb.

"Iran wants to possess nuclear weapons, following the example of Israel," Ehud Olmert said in a 2006 interview with SAT1.

Leading politicians, like former US President Jimmy Carter and ex-IAEA Director Mohammed ElBaradei, have mentioned the presence of nuclear weapons in Israel. In 2013, Britain’s Bulletin of the Atomic Scientists asserted that Israel had about 80 nuclear warheads and possessed enough fissile materials to produce between 115 and 190 nuclear warheads. However, the production of nuclear warheads in Israel was "frozen" in 2004.

However, this “freeze” can quickly “thaw out,” and the entire Israeli nuclear complex, consisting of several major nuclear infrastructure facilities, will get back to work.

Sorek Scientific Nuclear Research Center was set up n the 1950s in Nagal Sorek settlement outside Tel Aviv. Israel’s first 5 MW light-water nuclear reactor, brought in from the US as part of President Dwight Eisenhower’s Atoms for Peace program, was installed there.

This low-power reactor could not produce weapons-grade plutonium, and was mainly used for training specialists and devising methods of handling radioactive materials, which later came in handy in more comprehensive  research. However, despite Israel’s persistent requests, the Americans refused to provide nuclear fuel and equipment that could be used in a nuclear weapons program, so in the late-1950s, France became the main source of materials and nuclear technologies for Israel. The Sorek Center is monitored by the IAEA.

Nuclear Research Center at Dimona. A natural uranium heavy-water reactor, built and later modernized by French specialists, has been operating there since 1964. The 28 MW reactor has a capacity 40-60 kg of weapons-grade plutonium. Until 2003, Israel had produced  about 650 kg of plutonium - enough to build over 100 nuclear charges. (It takes between 3 and 8 kilograms of plutonium to produce a single nuclear warhead, depending on technology used). The Dimon Center of the IAEA is monitored by the IAEA.

Yodefat is a settlement in Galilee, where Israeli specialists reportedly assemble and dismantle nuclear weapons at the Raphael’s enterprise, called “Division 20”.

Kfar Zakharia - a missile base in the Judean Hills where strategic nuclear weapons and delivery vehicles are stored in warehouses.

Israel’s Jericho missiles are made in Beer-Yaakov, and their tests are carried out mainly at the army base in Palmachim. A considerable number of Israel’s nuclear-capable aircraft are stationed at the nearby Tel Nof base. Israeli military commentator Joab Limor wrote about this in his article titled “Israeli Weapons of Mass Destruction” as early as in 2011, citing the British magazine Jane’s Intelligence Review [2].

Israel’s strategic nuclear forces are built around a classic nuclear triad, consisting of land-based intercontinental ballistic missiles, bomber-carried cruise missiles and cruise missiles on submarines. As a means of ground-based delivery, foreign experts consider the three-stage Jericho-3 missile (possibly 16 missiles), whose range is estimated at around 6,500 km with a payload of 350 kg payload (one nuclear warhead), and with a range of 4,800 km with a 1-ton nuclear warhead.

Two air squadrons of 18 F-15I Ra'am (Thunder) fighter-bombers each carrying a pair of Israeli-made Gabriel cruise missiles. This is the aerial component of the Israeli nuclear triad.

In summation, it can be stated that Israel now has a wide range of non-strategic means of nuclear weapons delivery and an impressive nuclear arsenal by regional standards. The main emphasis is on the highly survivable maritime component of nuclear forces. This is deemed extremely important for Israel, which, being a small country, is very vulnerable to attacks weapons of mass destruction.

No so Iran, which has also been engaged in nuclear research since the 1950s. Over the years, the country has built up an impressive nuclear infrastructure.

However, no nuclear weapon has been created there, even though after the 1979 Islamic Revolution a secret directive on nuclear weapons development was adopted to ensure the survival of the Islamic regime, and a pertinent plan, dubbed “Ahmad” was drawn up with an eye to creating a nuclear warhead for a ballistic missile. By the way, it was the IAEA which, at the end of 2011, blew the whistle about the “Ahmad” project with a detailed twelve-page document titled “Possible military Dimensions to Iran's Nuclear Program.”

According to the IAEA, the Amad project was abruptly scrapped at the end of 2003, as ordered by high-ranking officials in Tehran. Simultaneously, the personnel employed in various “Ahmad”-related jobs are believed to have initially remained at their workplaces in order to register and report on the results achieved by that moment. After that - from the end of 2003 to the start of 2004 - both the equipment and the workplaces of those engaged in the project were destroyed to leave as little evidence as possible that might point to the “delicate” nature of the work done there.

All this meaning that since 2004, Iran has not been engaged in any military nuclear activity. By amazing coincidence, Jerusalem froze its production of nuclear warheads in that very same year of 2004.

Israel insists that the military aspect of the Iranian nuclear program is still there. Even though the IAEA’s latest reports point to the contrary, Israeli Prime Minister Benjamin Netanyahu claims that Iran is developing nuclear weapons at two secret sites in Tehran. Speaking at the UN, Netanyahu also recalled that in April he had produced tons of documents, which, according to him, had been obtained by Israeli intelligence in Iran.

“Since we raided [their] atomic archive, [the Iranians] have been busy cleaning out the atomic warehouse. Just last month, they removed 15 kilograms of radioactive material. You know what they did with it? They had 15 kilograms of radioactive material, they had to get it out of the site, so they took it out and they spread it around Tehran in an effort to hide the evidence,” the Israeli prime minister told the UN General Assembly in September.

Benjamin Netanyahu also showed several photos from a map application pointing to an address in Tehran, where he claimed nuclear materials were stored.

Israel has always been an ardent opponent of the Joint Comprehensive Plan of Action (JCPOA) for Iran, adopted by international mediators in 2015, arguing that this will not stop Iran from developing nuclear weapons.

Netanyahu still pointed to a positive consequence of the agreement

“By empowering Iran, it brought Israel and many Arab states closer together,” he said during his address to the UN General Assembly.

The recent mutual accusations of nuclear ambitions regularly leveled at each other by Tehran and Jerusalem are part of the war of words, elements of the Iran-Israeli Cold War, which has been going on for many years. The military-political tensions around Iran have been shooting up and the propaganda war between the two countries is heating up.

Undoubtedly, the Israeli politicians’ anti-Iranian nuclear rhetoric is aimed at the complete destruction of the 2015 nuclear deal.

The JCPOA is in a state of limbo now that the US has walked out of it and the other signatories are making every effort to salvage it in one way or another. If the deal collapses then Iran is sure to resume its military nuclear program which, in turn, will reflect very badly on the situation in the Middle East and around the world as no international organization, including the IAEA, will be able to control Tehran’s actions.

It looks like this is exactly what Jerusalem wants so that it can prove Tehran’s nuclear militancy and the correctness of its anti-Iranian policy.

[1] Nothing is definitely known about Israel’s nuclear tests. However, on September 22, 1979, a series of light bursts characteristic of a nuclear explosion of a 2–3 kiloton charge were recorded by the US satellite “Vela” 6911 near the Prince Edward Islands in the South Atlantic. It is widely believed that this was an Israeli nuclear test, possibly conducted jointly with South Africa.