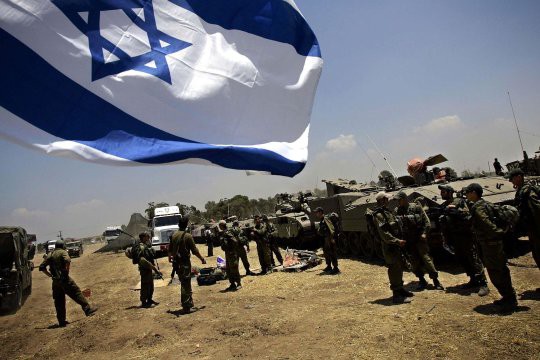 Israel has turned down Kyiv’s request for arms supplies to its armed forces. During a December 30, 2022 telephone linkup with Ukrainian President Volodymyr Zelensky ahead of a vote by the UN General Assembly, Israeli Prime Minister Benjamin Netanyahu asked Zelensky to vote against a draft resolution tabled by Palestine. However, Kyiv "rejected Israel's requests to oppose the resolution during a UN committee vote a few weeks ago due to Israel's refusal to provide military assistance to Ukraine." (The resolution concerned an initiative put forward by the Palestinian delegation to apply to the International Court of Justice in The Hague for a legal opinion on the long-term Israeli occupation of the West Bank).

The Ukrainian president and his diplomats simply have no time to delve into the complex workings of international and Middle Eastern politics. They have their own goals in mind and they couldn’t care less about the interests of other countries and their security concerns. Kyiv is even ready to overstep the boundaries of diplomatic protocol and do not hesitate to exert aggressive and boorish pressure on the countries’ leaders in public. Suffice it to recall how Ukraine’s "legendary" ex-envoy to Germany, Andriy Melnyk, called Chancellor Olaf Scholz "liver sausage."

Ukraine has long been bombarding Israel with requests and demands for the supply of weapons, including the much-coveted Iron Dome air defense system. Since the fall of 2022, Israeli diplomacy has been trying to play on the contradictions between Iran and Israel. On December 24, 2022, adviser to President Zelensky’s chief of staff, Mykhailo Podolyak wrote on Twitter, “Iran, which plans to increase military supplies to Russia, flies in the face of the very institution of ‘international sanctions’ … It is imperative to give up on the concept of  ‘nonworking sanctions,’ and ‘nonworking UN resolutions,’ and to start using such more destructive instruments as the destruction of production facilities and the arrest of suppliers…” On December 26, the Iranian Foreign Ministry spokesman Nasser Kanaani issued the following statement: “The Foreign Ministry has repeatedly stated its position on this issue (of UAVs and Ukraine - Ed.) ... Blaming Iran will not help Ukraine, its people and its (authorities - Ed.) … We consider threatening rhetoric irresponsible, no matter where such threats come from, and we hold the (authorities – Ed.) of Ukraine responsible for the legal and political consequences of such statements...” [i]

The election of Benjamin Netanyahu as Israel’s new prime minister gave Kyiv another reason for reiterating its appeals for arms deliveries from the Jewish State. On December 1, Zelensky said, “Of course, we are waiting for Israel's support. Of course, I don't want Netanyahu to balance, just like his colleagues before him, between Ukraine and Russia. He knows all the details and can definitely help with air defense. It is not a weapon for attacking the Russian Federation, so there is no need to look for compromises here.” [ii]

Ukraine has its own idea of a compromise though. Israel’s political and military leaders have repeatedly made it clear to Kyiv that they can’t supply air defense systems to Ukraine at least for two reasons - the secrecy of these systems and the problems pertaining to their production for supply.”

However, Ukraine is still trying to benefit from the change of guard in Israel even amid an ongoing probe into Netanyahu’s alleged corruption.  Simultaneously, Kyiv’s emissaries are trying to force an additional role on Netanyahu: “Israeli Prime Minister Benjamin Netanyahu could become an effective mediator between Moscow and Kyiv,” Mykhailo Podolyak said in an interview with the Israeli TV channel I24news.

“I have no doubt that Netanyahu could be an effective mediator because he understands exactly the nature of modern wars and the essence of mediation in such circumstances,” Podolyak said. [iii]

It looks like it is Washington, and not Kyiv, who actually wants to assign this role to Netanyahu. The game plan is crystal-clear – the US and its satellites are working hard to disrupt relations between Iran, Turkey and Russia. Russia, meanwhile, apparently wants to offer Netanyahu the role of an "effective mediator" in the Ukrainian crisis against the backdrop of Turkish and Israeli strikes on Iranian facilities and territories. However, mediation on such terms would destroy relations between Iran and Russia.

The idea of the new mediation came up also because the Turkish President Erdogan as a mediator does not suit the Western participants in the crisis, even despite Erdogan's certain achievements in this capacity. Overall, the person of the Turkish president looks fairly convenient as he is not a Western politician, not part of the elite; Putin talks to him, while Turkey is a NATO member and is focused on the European economy, also supports some sanctions against Moscow and has been cooperating with Ukraine since 2014. At the same time, the Turkish president is inconvenient for the West because he is implementing a gas hub project with Putin, cooperating in nuclear energy and buying weapons from Russia. In addition, Washington and Brussels see the upcoming presidential elections in Turkey as another chance, if not to get rid of Erdogan as president, then at least to influence him during the election campaign.

Kyiv's continuing pressure on Israel and its attempts to cash in  on the existential confrontation between Iran and Israel are hardly a purely Ukrainian initiative. There is an obvious interest here also by Washington, which continues to play on many boards. As part of its  anti-Iranian policy, the United States brings Ukraine into this game: “The United States creates an artificial threat from Iran so that: a) Israel has a casus belli for its own “special operation” against Iran; b) to block Iran's military-technical cooperation with Russia and thereby to end strikes against Ukraine's critical infrastructure.” [iv]

Ukraine is now the focus of global politics, as everything happening there is loud, sharp, hot, and not only because of the ongoing fighting, but also because of the political and information vortex that politicians and countries are drawn into. Some countries, for obvious and implicit reasons, become Ukraine’s best friends, supplying weapons and participating in the information and sanctions war against Russia. Others see their geopolitical interests differently, sticking to a special position both regarding the Ukrainian crisis and relations with Russia.

Participation in the Ukrainian crisis poses different threats to different countries, and their assessment is topmost on the minds of these countries’ political elites. Unfortunately, decisions in many cases are made based on ideological preferences and depend on the degree of a country’s sovereignty. Ideological attitudes can be a determining factor where and when the geopolitical situation and security issues allow it. The level of sovereignty determines the balance of the countries’ national interests and their ability to act, combining ideological attitudes and the interests of their security.

What is being offered to Israel? To become a participant in a new armed conflict in the Middle East, thus exacerbating the many contradictions there and setting the stage for future crises. At the same time, Tel Aviv is invited to join in another crisis - the Ukrainian one, which can only deepen the contradictions in the Middle East itself. The alleged “Iranian threat” is used as a pretext for drawing Israel into the Ukrainian crisis, and this “threat” is sure to grow if the Jewish State joins the fray.

An important question is, however, whether Israel will fit into the bipolar global system being built by Washington and London, focused on confronting Russia. How much Israel’s existential confrontation with Iran depends on the conflict, provoked by the West with Russia, so vividly exemplified by what is now happening in Ukraine? The supply of weapons to Ukraine, especially Nazi Ukraine, [v] is a marker, and not a necessity for Israel, whose place in such an ideological paradigm has long been determined by history. However, the pressure on Tel-Aviv is mounting, and the situation in the Middle East is heating up…

The opinion of the author is his own and may differ from the position of the Editorial Board.