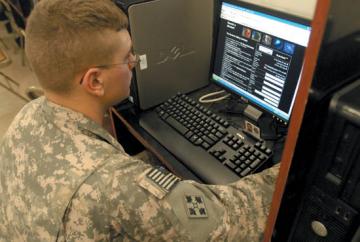 In the situation of military and political standoff against the Arabic World the authorities of Israel are paying particular attention to the information war.

The national intelligence service and the computer systems and communication department of the General Staff of the Israeli armed forces are in charge of planning and implementation of operations aimed at distortion of components of the information and telecommunication infrastructures in other countries.

In June 2010, considering the growing number of cyber attacks by Islamic extremists in the Internet, Tel Aviv decided to set up a special unit to fight “cyber terrorism” and to conduct special operations in the Internet and in the intranets of the governmental, military and financial institutions of potential enemies. The unit is being formed now as part of the General Staff’s special department on radio electronic warfare.

The Israeli authorities are recruiting the most gifted computer experts to work in the national army and civil agencies. They have established the interaction between Gilad Team, (a non-governmental hacker group which was set up in 2009 and has experience in hacking the governmental websites of Turkey, Lebanon and a number of Islamic organizations).

Israel’s armed forces use combat jets and drone aircraft equipped with the latest means of radio electronic warfare made in both Israel and in the US to distort the functioning of information and telecommunication systems of the neighboring states. In particular, jet fighters F-15I, Arava, Boeing-707 and Gulfstream G-550 planes, drones of Termes-450, Secer, Mk2, Heron and Hunter carry the means of radio electronic warfare.

At present also the works are under way on developing the complex of BAE Systems' Suter network exploitation programs. These programs make it possible to break into enemy networks, see what enemy sensors are seeing and, in some circumstances, become the systems manager with the ability to manipulate enemy’s data.

Israel used aviation means of electronic jamming in Lebanon in 2006 and during Operation Cats lead in the Gaza Strip (2008-2009). These means are also used almost during all regular flights by the Israeli air forces in the air space of Lebanon.

To perform tasks on suppressing of radio relay lines of the neighboring Arabic states the Israeli armed forces have six battalions - three of which are subordinate to the military intelligence agency and three are subordinate to the national military departments (one battalion in each of three departments). Together they can establish up to 300 centers and check points to ensure the neutralization of radio relay lines at the distance of 150 km.

Israeli Prime Minister, Defense Minister, General Staff’s Chief are the main persons who are in charge of planning and implementation of the operations in which information technologies are used to distort the functioning of information and telecommunication infrastructure of other states.

The General Staff’s intelligence department interacts with scientific institutions and industrial companies (which are part of the Elbit Systems corporation) on the aspects of the development of technologies aimed at neutralization of the informational systems of other states.

To protect the national cyberspace the Ministry of Finance set up a special department Tehila. This department is in charge of following tasks:

- to ensure protected data exchange via the Internet between state institutions, design of secured protected platforms for the websites of governmental organizations, prevention of illegal information’s spreading in the Internet, coordination of efforts of all involved departments to respond to cyber attacks.

Tehilas has watch groups, which are in charge of rebuffing the cyber attacks aimed at the national computer network. If the algorithm of the computer attack is unknown a group of experts joins the watch group, conducts a throughout analysis of the situation and works out instruction for the team.

In early 2010, Tel Aviv approved the concept under which the authorities have the right to attack the servers and email addresses through which attempts were made to destroy the informational space and electronic data bases of Israel. In line with this concept the Tehila group received additional authorities and has the right to conduct offensive operations against foreign computers systems.

Israeli people think that if there are no international legal mechanisms, which restrict the use of software and equipment for cyber attacks, they are free to use them without any agreements with international organizations and other states.