“It is now obvious that Western states are simply afraid a Commission who conduct a relevant investigation!” 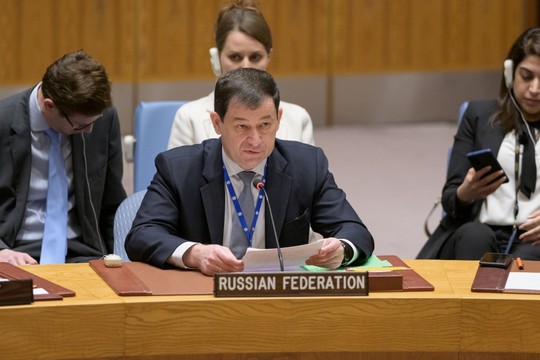 Photo/Permanent Mission of Russia to the United Nations

Explanation of vote by First Deputy Permanent Representative Dmitry Polyanskiy (photo) before UN Security Council vote on a draft resolution on establishing a SC Commission to investigate into claims presented in the complaint lodged by the Russian Federation under Article 6 of the BTWC:

- The vote that we are about to have will mark an important milestone for the Security Council. We will need to determine whether the Council reiterates its readiness to act in accordance with international law, in this particular case – the Convention on Biological and Toxin Weapons (BTWC).

- We provided a detailed elaboration of our position at the meeting on 27 October, so I will not repeat it now. Then we hosted two rounds of expert consultations on the draft resolution. However all we heard were the dated points of our former Western partners regarding the “Russian propaganda” and claims that our evidence was allegedly little convincing and not worth further consideration. They articulated those findings unilaterally and preempted any conclusions of the Council. Basically, they substituted the decisions of the key UN body, which is responsible for maintaining the international peace and security, with their biased assessments made in national capacity.

- We regret that our Western colleagues in fact sabotaged the negotiations process on the draft resolution. It is now obvious that Western states are simply afraid that a Commission may be created to look into the materials submitted by the Russian Federation and conduct a relevant investigation as envisaged by the BTWC. What they are particularly unhappy about is that the Commission would include all members of the Security Council, which would not let the Western countries try and make decisions unilaterally on behalf of the entire international community. As for other forms of international cooperation, they dismiss them as something incompatible with the “rules-based order” concept that they are promoting ardently, and that should let them set all the rules by themselves.

- The accusations of Western countries or Ukraine against us without providing any evidence are immediately presented as the ultimate truth. But as soon as we raise our concerns having backed them with concrete evidence, we become blamed for spreading propaganda.

As for the UN Charter and international law in general, Western countries only remember about those when they need to. Thereby they strongly reject the idea that these norms can and should be applied to the West as well. The engagement on our draft resolution vividly confirms this.

…The UN Security Council did not adopt a resolution of the Russian Federation on the investigation of military biological activities in Ukraine. USA, Great Britain and France were “again against ”…