It was unusual New Year Address of Vladimir Putin 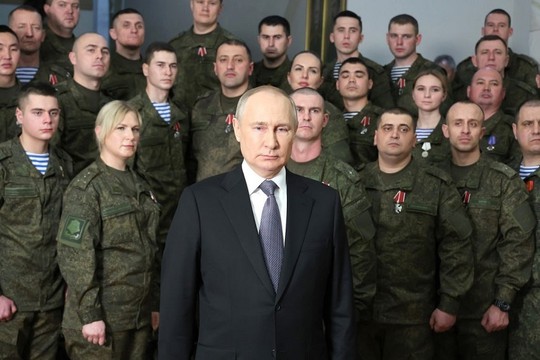 The year 2022 is drawing to a close. It was a year of difficult but necessary decisions, of important steps towards Russia's full sovereignty and a powerful consolidation of our society.

It was a year that put many things in their place, and drew a clear line between courage and heroism, on the one hand, and betrayal and cowardice on the other, showed us that there is nothing stronger than love for our near and dear, loyalty to our friends and comrades-in-arms, and devotion to our Fatherland.

It was a year of truly pivotal, even fateful events. They became the frontier where we lay the foundation for our common future, our true independence.

This is what we are fighting for today, protecting our people in our historical territories in the new regions of the Russian Federation. Together, we are building and creating. Russia’s future is what matters the most. Defending our Motherland is the sacred duty we owe to our ancestors and descendants. The moral and historical truth is on our side. The outgoing year has brought great and dramatic changes to our country and to the world. It was filled with uncertainty, anxiety and worry.

But our multiethnic nation showed great courage and dignity as it had in every challenging period in Russian history, supported the defenders of our Fatherland, our soldiers and officers, and all participants in the Special Military Operation, in both word and deed. We have always known that Russia's sovereign, independent and secure future depends only on us, on our strength and determination, and today, we have become convinced of it once again.

For years, Western elites hypocritically assured us of their peaceful intentions, including to help resolve the serious conflict in Donbass. But in fact, they encouraged the neo-Nazis in every possible way, who continued to take military and overtly terrorist action against peaceful civilians in the People's Republics of Donbass.

The West lied to us about peace while preparing for aggression, and today, they no longer hesitate to openly admit it and to cynically use Ukraine and its people as a means to weaken and divide Russia.

We have never allowed anyone to do this, and we will not allow it now.

…Let these heartfelt words and noble feelings give each of us immense strength and confidence that together, we will overcome all the challenges and keep our country great and independent.  We will only move forward, to fight for our families and for Russia, for the future of our only, beloved Motherland.

- Results of Ukrainian-NATO aggression against Donbass in 2022. In the Donetsk People Republic as a result of the direct combined aggression of Ukraine and NATO, 1,091 civilians were killed and 3,533 people were injured in various ways. 9,399 residential buildings were damaged, as well as 2,279 civilian infrastructure facilities, including 736 electricity, water, heat and gas supply facilities, 465 educational institutions, 123 medical facilities and 61 critical infrastructure facilities.

On January 1, 2023 AFU fired 397 shells against civilians in the DPR. Eleven civilians were injured. 47 houses and some civil facilities have been damaged (see photo on the right side: the U.S- made HIMARS missiles – the New year ‘gift’ from Uncle Joseph).

More than 3.6 thousand houses in 84 settlements and 413 civil infrastructure facilities, including 92 educational and 18 medical institutions, were damaged.

The Lugansk People Rupublic’ territory was shelled by the Ukrainian side 1,353 times in 2022 by using heavy weapons, with more than 11,000 rounds fired, including 609 rockets from HIMARS and more than 200 shells of 155 mm caliber.

- Russia’s latest missile barrage targeted Ukraine’s ability to launch drones at Russian territory. The strikes, which took place a day earlier, destroyed Ukrainian production facilities involved in manufacturing drones used by Kiev to carry out “terrorist attacks” against Russia, according to the Russian Defense Ministry announced on January 1, 2023.The Russian attack also targeted locations where action-ready drones were parked, and their launch sites, the MoD statement added. “The goal of the strike was achieved, Kiev’s plans to carry out terrorist attacks against Russia in the near future have been thwarted,” the Ministry announced.