Italy vs France: war of elites over “yellow vests” and Libya 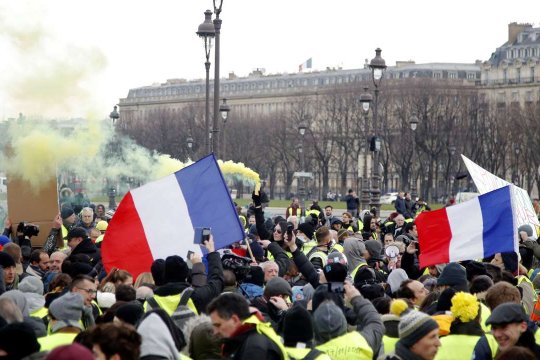 The disputes, which regularly flare up between the current governments of France and Italy are important for Russia, since the ideological rift between President Emmanuel Macron and the ruling Italian coalition of Matteo Salvini and Luigi Di Maio has, among other things, have direct bearing on this country. However, there is more to these disagreements than just different views about the role played by Moscow, which Paris sees as purely negative, and Rome - as causing sympathy and even inspiring hope.

Paris and Rome disagree also about the “yellow vest” protests as well as about a settlement in Libya, where France and Italy are vying for the role of the main peacemaker in the war-torn North African country. Let us take a closer look at the root causes of these disagreements.

Ever since his election in 2017, President Emmanuel Macron, has represented the European Union’s globalist “mainstream” of today's European Union, blaming the current failures of the Old World on the suddenly increased influence of “nationally oriented” populists and, last but not least, Russian “schemes.”

During his election campaign, Macron brought up the issue of Russia’s “malicious interference” into European politics, accusing the Russian media of “illegally influencing the elections” with its negative coverage of his person.  Since the start of the politically damaging “yellow vest” protests that flared up at the end of 2018, the Macron administration has been trying hard to  blame them down on “Moscow’s hand” allegedly lurking behind both these protests, and also Brexit. [i]

Meanwhile, the Italian Interior Minister Matteo Salvini views Russia’s role as positive and denies having taken "a single ruble” from Putin, despite repeated claims to the contrary by The Financial Times and other European mainstream media outlets.

In January 2019, however, it became clear that there was more than just dissatisfaction with the new “environmental” tax that triggered the “yellow vest” protests. People vented their anger also at the EU’s globalist policy, namely financial austerity, mass immigration to Europe and, above all, the essentially undemocratic nature of the European Union’s present structure, which ignores the “protest” results of elections and referendums (Brexit, the Dutch vote against Ukraine’s association with the EU, the electoral gains achieved by the “anti-system" Marine Le Pen and Jean-Luc Mélenchon in France, etc.)

Fully aware of this, the leaders of Italy’s ruling parties openly sided with the “yellow vest” protesters.

"I support honest citizens protesting against a president who governs against his people," Matteo Salvini, who combines the posts of Deputy Premier and Interior Minister with that of the leader of the Italian League party, said in a statement on January  9, 2019.

In his swipe at President Macron, Salvini was supported by his partner in the ruling coalition, the leader of the Five Stars Movement (M5S), Luigi di Maio, who called on the ”yellow vests” not to “weaken,” and offered French protesters the use of his party’s Rousseau platform to improve organization and "draw up an electoral program."

"This system (Rousseau) is made for a horizontal and spontaneous movement such as yours and we would be happy if you want to use it," Di Maio wrote in a post on his party’s blog.

Summing up the conflict simmering behind those provocative statements, the pro-European Commission EU Observer online newspaper wrote: “Macron attacks Salvini as the leader of the EU front, while Salvini acts as the leader of the whole league of forces against the EU. And all this - on the eve of the upcoming elections to the European Parliament.” [iii]

The Macron administration sought to present criticism from the “populist” Italian coalition as an unprovoked PR attack by one EU member on another, with European Affairs Minister Natalie Loiseau urging her Italian colleagues to "show respect" for France and emphasizing that France and Italy have always been "neighbors, allies, and friends."

“France refrains from lecturing Italy. Mr. Salvini and Mr. Di Maio would be better off putting their own house in order,” Loiseau tweeted earlier this month.

“I believe that the main priority for the Italian Cabinet should be the welfare of the Italian people. And I'm not sure that its interest in the yellow vests movement has anything to do with the wellbeing of the Italians,” she added. [iv]

Salvini and Di Maio immediately lashed back at these stinging remarks, accusing the French leadership of hypocrisy. And with pretty good reason too, as Macron’s team did tell a lie when it said it had always behaved correctly towards Italy. Most recently, Macron was all too happy to lambaste the Italian "populists’" position on migration issue, while heaping praise on his own political correctness.

As it turned out, however, last summer’s incident with the migrant ship Aquarius, which tried to bring 629 asylum seekers from North Africa and the Middle East to Italy, was fresh on Matteo Salvini’s mind. When the Italian government denied the Aquarius the right to dock, Emmanuel Macron accused the Italian authorities of irresponsibility and even compared them to “leprosy spreading throughout Europe.” (Notably, the formation by the Five Star Movement and the League of the new Italian coalition government in 2018, shortly before the incident with the Aquarius, caused serious ideological concerns among globalists also because the Italian government’s draft “contract” provided for the immediate lifting of anti-Russian sanctions.) [v]

“Maybe Mrs. Loiseau has forgotten that President Macron once compared us to leprosy when commenting on our government… The French people are asking for change and for recognition,” Matteo Salvini said.

“What hypocrisy!” Luigi Di Maio chimed in, adding that the real leprosy was the policy pursued by the French government, namely its predilection for pursuing a “colonialist” line in Africa, causing an influx of migrants from Africa heading towards Europe and leaving Italy to cope with this problem alone. [vi]

All this is adding a new twist to the Franco-Italian conflict that has been dragging on since summer over ways to handle the migrant crisis. While in summer Matteo Salvini accused Emmanuel Macron of hypocrisy over the migration problem, advising him to let in “thousands of migrants, as Italy did” before lecturing Rome on humanism, the sides are now at loggerheads over the entire “European project,” the relations with Russia, the austerity policy, etc. The scale of this conflict is widening now that, according to the EU Observer, Di Maio plans "to bring together left- and rightwing anti-system voters across Europe who are in favor of preserving the union, but are against austerity policies." (vii)

Another important point of contention is primacy in the Libyan settlement. Emmanuel Macron’s May 2018 attempt to bring the leaders of all the main conflicting parties in Libya together in Paris was openly frowned on by Rome, which held an international conference on Libya in Palermo, Sicily that brought together 38 delegations with the list of guests including the Libyan National Army Commander, Khalifa Haftar, the head of the rival government in Tripoli, Faiz Saraj, the Russian Prime Minister Dmitry Medvedev and the Egyptian President Abdel Fattah El-Sisi. During the conference, the Italians openly tried to shut the French out of important decisions. (viii)

The Palermo meeting was a clear diplomatic victory for Rome, which, unlike Macron, who was quick to announce his success and upcoming peace in Libya through highly improbable early elections, the Italians set themselves more pragmatic tasks in Libya than just achieving immaculate democracy and quick prosperity. Matteo Salvini believes that the first thing to do is to end illegal migration and set up a network of independent and non-corrupt migrant identification centers.

Of course, while contemplating all these factors, Russian observers should avoid looking at the situation from the standpoint of whether the French or the Italians are closer to Russia. What is now happening between the French and Italian elites is an ideological dispute, rather than an interstate conflict. It just so happened that Italy’s position in the dispute is more realistic and better attuned to taking into account Russia’s interests – a position that is now being shared by an ever growing number of voters across the European Union.

Therefore, Russia has every right to take this position closer to heart than that of the globalists, which the current French president happens to epitomize. Because accusations by Macron and his globalist friends of “Russian meddling” will come anyway, Moscow can and should make its opinion heard. In our day and age, a desire to “please everyone” and avoid criticism by sitting on the ideological fence is viewed upon as a sign of weakness.