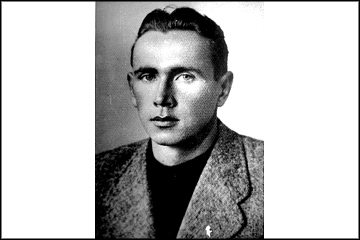 In Athens on January 7th, 2013, the 70th anniversary of the execution by the Nazis of British intelligence agent number 033V, Jerzy Ivanov-Šainović, was solemnly marked. This man's name is known to almost every Pole and Greek, but it is unknown in Russia.

He was an extraordinary man: multilingual (he spoke English, Polish, Russian, Greek, German, and French), an athlete (he played in the Polish water polo team and in 1934 he won the Greek championship in swimming in the 100 m freestyle), but above all, a talented spy.

The strange combination of name and surname is explained because the future spy was born in 1911 in Warsaw. Poland was then part of the Russian Empire, and Jerzy’s father was Colonel Vladimir Ivanov of the Russian army, and his mother was polish, Leonarda Šainović. Jerzy was actually called Georgi, and his surname was Ivanov, but a few years after his birth his parents divorced. Then Leonarda married a Greek, Janis Lambrianidis, and in 1925, she moved to Greece with her son. It was her custom to call him in the Polish way - Jerzy. When his Mother’s Polish name was added to his Russian name is unknown. Under the name Jerzy Ivanov-Šainović, he went down in history in the anti-fascist annals of Poland and Greece, where he is considered a national hero.

The war found Georgi Ivanov-Šainović in Thessaloniki. Already by May 1940, the 29-year old man, who also had an adventurous character, had made contact with the Polish station in Thessaloniki. In April 1941 he moved to Palestine, waiting in line to be sent to the Carpathian Rifle Brigade - joining the Polish armed forces in the West. The Carpathian Rifles were to be used against the Nazis in the Middle East and North Africa. But Ivanov-Šainović was not to be a simple soldier. He decided to be seconded to the British army. So the son of a Colonel in the Russian Imperial army and a polish woman found himself in Cairo, working for British intelligence.

In Alexandria, Egypt, G. Ivanov-Šainović received the necessary training, and was secretly landed on the Greek coast by a British submarine. In Greece, Georgi quickly established contact with the local partisans, committed acts of sabotage, and supplied information to the British about the movement of Nazi troops being dispatched to North Africa.

His astonishing composure and analytical mind enabled him to carry out daring operations. So, under the guise of working at the port, he got on board a German submarine, which served as a base for a unit of German frogmen, and planted a magnetic mine.

This was not the only German submarine destroyed by G. Ivanov-Šainović. In addition to submarines, he sank several surface vessels. Being a deft swimmer, Georgi swam to moored ships, and planted magnetic mines. By sabotage and direct action Georgi Ivanov and his accomplices destroyed around 400 German and Italian aircraft in Greece. Saboteurs under his command burned truckloads of weapons, blew up ships, and staged collisions of transports carrying enemy soldiers.

He was lucky on many occasions. Twice he was captured by the Gestapo, and both times he managed to escape. The third arrest proved fatal.

The fearless spy was given up to the Gestapo by one of his acquaintances. The Nazis seized Ivanov-Šainović in Athens. Hitler's Court sentenced him to a triple death sentence (based on previous escapes). But Ivanov-Šainović was not prepared to surrender. On January 4th, 1943 he made another attempt to escape - the last of his life. A patrol wounded Georgi in the leg. He fell down, got up and kept running. There were a few more shots.

The bloodied Ivanov- Šainović was seized, and on the same day executed with other condemned. The official Greek and Polish histories claim that his last words were "Long live Greece! Long live Poland! "

After his death, this brave man was awarded the highest award in Poland – the Order of Virtuti Militari. In 1945, the British Field Marshal Harold Alexander, thanked Georgi Ivanov-Šainović, and Queen Elizabeth II gave £ 1000 to his family in recognition of his efforts.

Polish novelist and translator of Russian literature Stanisław Strumph-Wojtkiewicz (who by the way, in 1939-1945 was a part of the Polish armed forces on the territory of the Soviet Union and was a man of pro-Soviet views, because of which he often did not get along with his fellow countrymen) devoted a novel to Georgi Ivanov Šainović, "Agent number 1".

In 1971, a film was screened in Greece based on an adaptation of this novel and directed by Zbigniew Kuzminski.

It has often been suggested that the prototype for the character of James Bond was based on Georgi Ivanov. Whether this is true or not, is hard to say, but, clearly, the short but eventful life of the extraordinary man that was George Ivanov-Šainović, can easily serve as material for many novels.