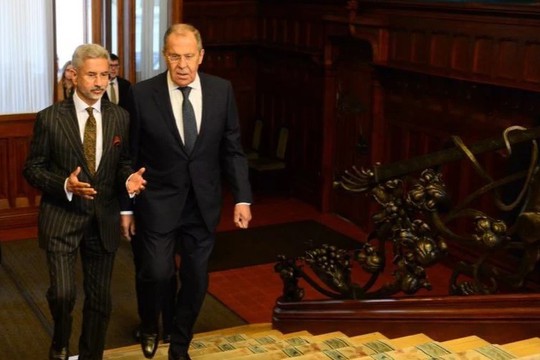 International North-South Transport Corridor as well as the Chennai-Vladivostok Eastern Maritime Corridor was important. External Affairs Minister S Jaishankar stressed that Russian participation in self- reliant India and ‘Make-in-India’, would build a more contemporary bilateral economic relationship. The totality of Jaishankar’s remarks conveys that there is no change in our longer-term strategy of continuing to strengthen wherever possible our economic and defence ties with Russia, notes Kanwal Sibal, a former India Foreign Secretary and Ambassador to Russia.

External Affairs Minister’s Jaishankar’s visit to Moscow on November 7-8 for consultations with Foreign Minister Lavrov and a meeting of the Inter-Governmental Commission on Trade, Economic, Scientific, Technical and Cultural Cooperation (IRIGC-TEC) which he chairs from the Indian side have drawn considerable attention because of its timing. The IRIGC-TEC met at a time when Russia is under draconian sanctions by the West, and India and other countries are under pressure to reduce ties with Moscow has an obvious significance.

India is signaling that it is not deterred by these sanctions and pressures and will continue to nurture and expand its economic ties with Russia in pursuit of its national interest, and that it sees these ties independently of those with the West.

Jaishankar told his counterpart Deputy Prime Minister Manturov that he had brought a delegation of senior officials from the Ministries of Agriculture, Petroleum and Natural gas, Ports, Finance, Chemicals and Fertilizers as well as Commerce and Industry for substantive discussions to chart the future course of action, with the goal of realising the optimum potential of bilateral trade and economic relations – a target of $30 billion by 2025 – that will address the existing trade deficit and market access issues in the interest of long term stability.

While bilateral trade in 2022 had grown considerably, it had to be made more sustainable by addressing the issue of the trade imbalance and facilitating more Indian exports. While noting that our energy and fertilizer cooperation has been strengthening, Jaishankar hinted at some concern about the potential disruption of the pipeline of supplies in view of Russia’s pre-occupation with the military operations in Ukraine when he underlined that it was “essential that our time-tested defence relationship continues to perform smoothly”.

By stating that the global economy is simply too inter-dependent for a significant conflict anywhere not to have major consequences elsewhere, he noted the growing concerns about energy and food security and the very acute pain felt by the Global South.

India, therefore, strongly advocates a return to dialogue and diplomacy, he said, adding that in so far as specific initiatives pertaining to issues like food grains and fertilizer shipments were concerned, or any other problem for that matter, India will be as helpful as it can be, and that India will be supportive of any initiative that de-risks the global economy and stabilizes the global order at this stage.

This was by no means an offer to mediate in the ongoing conflict, as our press had speculated before his visit.

The US could begin a process of negotiations, especially as the conflict has now evolved into a proxy war by the West against Russia, with the US and the EU pumping in more and more arms into Ukraine, as well as financial support to keep the conflict going, despite the nuclear dangers that are emerging, stresses Kanwal Sibal.