Jan Charnogursky: we are ready to bring the monument to Marshal Konev from Prague to Slovakia 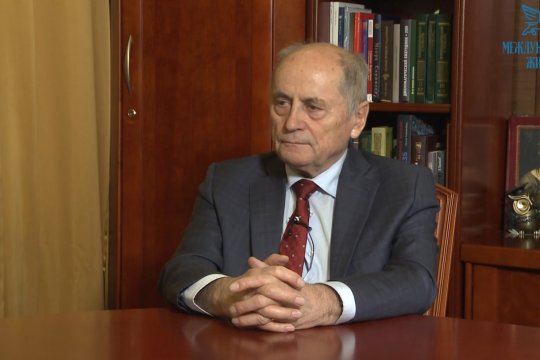 Armen Oganesyan: Good afternoon. I have a few questions for you, Mr. Chairman. The death of General Soleimani led to an outbreak of tensions in Iran. This apparently prompted Slovakia’s decision to withdraw its troops from Iraq, where they were stationed as part of the NATO mission there. Was it a signal to Washington?

Jan Charnogursky: I think this means that no matter how high tensions may shoot up, the internal stability of NATO members is not very high. NATO members, Solvakia included, have previously recalled their soldiers from Iraq. Angela Merkel headed to Moscow to consult with President Putin. This means that we have a crisis, though not a very serious one.

Armen Oganesyan: Last year, Slovakia, which had taken over the OSCE chairmanship, proposed a number of initiatives. Its Foreign Minister, Miroslav Lajčák, even said that some issues related to most complicated problems of global development, including of course European, had been put on the agenda, and ways of tackling existing crises outlined. What exactly are the crisis situations that have prompted the dialogue the foreign minister talked about?

Jan Charnogursky: Well, the OSCE will probably support all attempts to resolve crises, even small ones, through negotiations. For example, in Central and Eastern Europe Slovakia might try to bring some problems existing between Poland and Russia closer to a solution. During the crisis with oil deliveries to Slovakia via Ukraine, representatives of Ukraine, Russia and other countries gathered in Košice to discuss the issue. This would have been impossible without Slovakian mediation.

Armen Oganesyan: Thank you. In Istanbul, the Turkish gas pipeline, the Turkish Stream, as we call it, has gone online. As a result, it will bring gas also to Slovakia. Right now, it already does in northern Macedonia, Greece, with Hungary and Slovakia being next in line. Some critics say that for Slovakia this is not so important. Is it really so? On the whole, what is your assessment of Slovakia’s development potential?

Jan Charnogursky: You know, economically speaking, gas supplies via Ukraine were the most beneficial option for us, because most of the gas passed through Ukraine and then via Slovakia. Therefore, Slovakia was in favor of keeping the Ukrainian route as it also meant transit via Slovakia. In other words, this also meant money for us. Or at least some of it.

Armen Oganesyan: Money for Slovakia, because Slovakia is a transit country, right?

Jan Charnogursky: Yes, yes, Slovakia is a transit country. I think it’s a very serious transit country, because there have never been any problems with the gas transit through Slovakia. Well, if it goes through Turkey and then via the Nord Stream pipeline, Slovakia won’t mind.

Armen Oganesyan: We now see a monument to General Konev, who led the army, which liberated Prague, other European countries and Germany, being dismantled in the Czech capital. Some public figures, including you, have suggested that the monument be moved to Slovakia.

Jan Charnogursky: As far as I know, Slovakia has no problems with monuments to Soviet soldiers. As for the monument to Marshal Konev, this is a special matter, because Marshal Konev led an attack through Dukla to help the Slovak uprising in September-October 1944. 21,000 Soviet soldiers and 20,000 Slovak soldiers died there. And yes, that’s why the attitude to Marshal Konev’s monument is so special. When Russophobic, and I would say, stupid officials in Prague decided to demolish the monument to Marshal Konev, we decided that yes, let us buy this monument, we don’t want to get it as a gift, we will buy this monument, bring it to Slovakia and set it up at a private site to make sure that nothing like what is now happening in Prague will happen again. You know, the thing hasn’t been decided yet though. It seems to me that Prague may now start to reconsider its decision. As to Russia, it wants the monument to remain where it is, of course.

Armen Oganesyan: We appreciate your attitude. Of course, we want Konev to stay in Prague. But let's see what will happen next. And what do you think about the attempts to revise, rewrite history? After all, this is taking place not only in the Czech Republic, but also in Poland and other countries.

Jan Charnogursky: Yes, you know, history was like an objective thing. The objective facts that happened can’t be changed. They can be interpreted, explained, above all to young people. But the result of this is never good. The attempts to interpret the outbreak of World War II become a political attempt to use this against Russia. I think that Europe, including Russia, has come a long way and changing its past history would be impossible and wrong too. Therefore, all these attempts only harm Europe.

Armen Oganesyan: Thank you. Well, there are some problems here. What do you think about the current state of the EU in the context of Brexit and other things, amid mass migration from the Middle East, from Africa and, according to UN estimates, a new wave of such migration coming up? What do you think the EU will look like in the future? What are the threats to its further integration? Or maybe something is contributing to this integration? Besides, how do you see the role played in this European integration by the Visegrád Group, which you were directly involved with during your stint as Prime Minister? And how does Slovakia feel today as a member of the union?

Jan Charnogursky: When the Warsaw Pact ceased to exist in the early 1990s, its members, including Czechoslovakia, were left with no choice but to join the EU. Everyone wanted to join the European Union, Slovakia wanted too. Slovakia is still a Euro-optimistic country with more people supporting the country’s membership of the EU than those who don’t. But criticism of the European Union keeps growing, even in EU countries. The problem, as I see it, is the lack of patriotism in the European Union. Even in the “old” EU countries, the sense of patriotism is on the wane now with some newspapers, etc., even branding patriotism as fascism. I see efforts to promote the rise of patriotism as a topmost priority for these countries, including Slovakia.

Armen Oganesyan: that is, to defend your national interest, is that what you mean?

Jan Charnogursky: Yes, but to include some kind of European patriotism too. Nothing of this is happening yet, and until this happens, promoting something else won’t be easy.

Jan Charnogursky: In per capita terms, Slovakia is now the world’s leading carmaker, ahead of Germany, the US, France and others. However, Slovak media already wonder just how long this will last, since many of these cars are only assembled in Slovakia, and when these companies realize that they will be better off assembling their cars back home, we in Slovakia could see a repetition of the situation of the early 1990s when industrial production folded. Right now, no other solution is in sight. Yes, we would like to have more production, not just car assembly, but things are going very slowly.

Armen Oganesyan: Do the Visegrád Group countries have their voice heard in Brussels? Do they carry any weight in the eyes of the Brussels bureaucracy?

Jan Charnogursky: Formally, the countries of the Visegrád Group have many voices in various European and EU structures. When they vote together, they can have an impact on Brussels’ decisions. However, they speak in one voice only when it comes to funding from Brussels.  We are all together, we vote together. But other interests of Poland, the Czech Republic, Slovakia and even Hungary, are slightly or completely different. The interests of Hungary and, for example, Slovakia, even relevant to the Trianon peace treaty after WW I, are very different. Therefore, the Visegrád Group is not yet stable.

Armen Oganesyan: Are you more or less united on migration issues?

Jan Charnogursky: On the issue of migration, yes, we all believe that we can’t accept migrants the way they want us to in Brussels. So far, this has been a practical problem only for Hungary, because the migrants who came to Europe via the Balkans passed through Hungary. Almost all of them want to go to Germany, because their goal is to reach a country with the highest living standards.

Armen Oganesyan: Some media outlets call you a Russian agent of influence, that you head the coordination council of the international association of “Friends of Crimea.” Are you worried about being called as such? In Bulgaria, for example, they are persecuting Nikolay Malinov, the leader of the country’s Russophile Movement, accusing him of nothing short of being a spy. You have spunk, really.

Jan Charnogursky: I was a political prisoner once, you know.

Armen Oganesyan: But not for being pro-Russian.

Jan Charnogursky: Under Communism, yes, so they can no longer intimidate me. I know from experience how important Russia is for Slovakia, for the Slavic peoples, and for others too. Even in Russia a book came out in 2017 about defense-related cooperation between the Soviet Union and Slovakia. This is not just someone’s opinion, it is simply a geopolitical fact that it is in the best interest of Slovakia, and not only Slovakia, to have good relations with Russia.

Armen Oganesyan: Thank you, Mr. Chairman, for your answers. I wish you a nice trip to Russia.