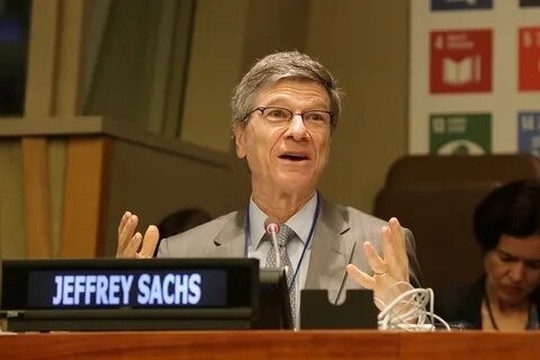 “The war in Ukraine is the culmination of a 30-year project of the American neoconservative movement”, convinced Jeffrey Sachs an American economist, public policy analyst and former director of The Earth Institute at Columbia University.

The neocon track record is one of unmitigated disaster, yet Biden has staffed his team with neocons. As a result, Biden is steering Ukraine, the US, and the European Union towards yet another geopolitical debacle. If Europe has any insight, it will separate itself from these US foreign policy debacles.

The main message of the neocons is that the US must predominate in military power in every region of the world, and must confront rising regional powers that could someday challenge US global or regional dominance, most importantly Russia and China. For this purpose, US military force should be pre-positioned in hundreds of military bases around the world and the US should be prepared to lead wars of choice as necessary.

The United Nations is to be used by the US only when useful for US purposes.

The neocons championed NATO enlargement to Ukraine even before that became official US policy under George W. Bush, Jr. in 2008. They viewed Ukraine’s NATO membership as key to US regional and global dominance.

Robert Kagan spelled out the neocon case for NATO enlargement: “The neocon outlook is based on an overriding false premise: that the US military, financial, technological, and economic superiority enables it to dictate terms in all regions of the world.”

It is a position of both remarkable hubris and remarkable disdain of evidence. Since the 1950s, the US has been stymied or defeated in nearly every regional conflict in which it has participated.

Yet in the “battle for Ukraine,” the neocons were ready to provoke a military confrontation with Russia by expanding NATO over Russia’s vehement objections because they fervently believe that Russia will be defeated by US financial sanctions and NATO weaponry.

The West’s economic sanctions have had little adverse impact on Russia, while their “boomerang” effect on the rest of the world has been large.

Moreover, the US capacity to resupply Ukraine with ammunition and weaponry is seriously hamstrung by America’s limited production capacity and broken supply chains. Russia’s industrial capacity of course dwarfs that of Ukraine’s.

The most likely outcome of the current fighting is that Russia will conquer a large swath of Ukraine, perhaps leaving Ukraine landlocked or nearly so. Frustration will rise in Europe and the US with the military losses and the stagflationary consequences of war and sanctions…