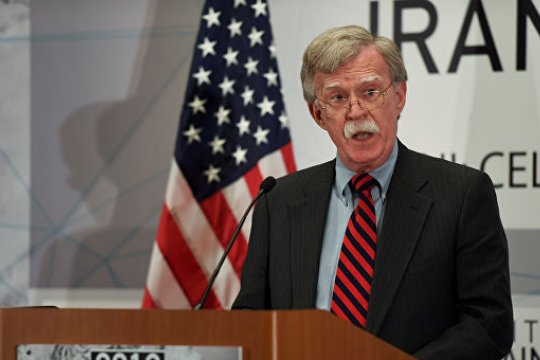 The American edition of The Wall Street Journal (WSJ), citing former and currently serving politicians who wished not to be named, reported a few days ago that the US National Security Council (NSC), led by presidential adviser John Bolton, turned to the Pentagon last autumn with a request to devise several variants of striking Iran.

The reason for such a request was a mortar attack carried out in September 2018 by a pro-Iranian group against the diplomatic quarter of Baghdad, where the US embassy is located. Two days later, a similar attack was reported to have occurred in the southern Iraqi city of Basra, where the American consulate is based. No casualties or damage were reported. However, former deputy national security adviser Mira Ricardel described the shelling as an "act of hostilities" and made it clear that the United States should have responded with a "similar act."

As a result, the US national security team held a series of meetings to discuss how the American side should respond. After that, Mr. Bolton urged the Pentagon to provide options for attacking Iran.

Officials neither confirmed nor denied the WSJ reports. NSC press secretary Garrett Marquis did not provide a clear answer to the question of whether the Council had been considering a military strike against Iran. “We are considering a  full range of measures to ensure security and guarantee our interests,” he said.

It should be noted here that the general staffs of the armed forces of any self-respecting country plan variants of both offensive and defensive operations against a potential adversary in advance. This work is carried out with a constant analysis of the changes taking place in the camp of the enemy, and in their own country. Therefore, undoubtedly, the Joint Chiefs of Staff (US General Staff) has in its secret vaults a variety of options for a war with Iran - the main potential opponent of the United States, as Washington has called it on more than one occasion.

Another matter is the case of John Bolton, when his personal request, even through the channels of the National Security Council, was carried out, according to observers, bypassing President Trump. Such a request took the Pentagon by surprise and put defense department officials who were used to everything “in a shock.” However, the request was accepted for consideration.

According to the WSJ, the Pentagon provided a complete layout proposing some general options for the operation, including a cross-border air strike on an Iranian military facility, which would be mostly symbolic. But the then Secretary of Defense Jim Mattis and other senior military officials strongly opposed retaliatory actions, arguing that the damage from the shelling of the US diplomatic missions was insignificant. And this basically logical viewpoint eventually prevailed.

But how will acting Secretary of Defense, Patrick Shanahan, act?

Any blow on Iran may lead to a full-blown armed conflict. Hypothetically,  considering the possibility of an airstrike on an Iranian military facility, it will undoubtedly trigger a return missile strike by the Iranian armed forces on any US military base in the Middle East. The Iranian missile forces have every potential to do so. And this means a war.

Is the United States ready for such a scenario?

It has to be pointed out that even massive missile and air strikes against Iran will not force Tehran to surrender. As in any war, the winner must march over the conquered territory. This calls for a ground operation.

Is the United States ready for this?

As the Field Service Regulations the US Army recommends, in order to achieve the goal of an offensive in the direction of the main blow it is necessary to create at least 6-fold superiority over the defensive forces and facilities. The question arises whether the US Armed Forces are capable of building such a superiority at least in one direction of the Iranian theater of war?

The number of regular armed forces of Iran ranges, according to various sources, between 540 and 900 thousand. The defense doctrine of the IRI puts a major emphasis on the Basij Islamic Revolutionary Guard Corps resistance forces, [i] a paramilitary, irregular militia and a reserve force of the regular armed forces whose main task is to participate in the defense of the country's territory. The main combat units of "Basij" are "Ashura" battalions, which consist of men, and "Al-Zohra" female battalions, numbering an average of 400 each. Currently, 2500 such battalions are formed in Iran, consisting of 1 million volunteers, well trained both militarily and ideologically. In total, Iran’s “Basij” system embraces more than 12 million Iranians.

Is it possible for the United States and their allies to outnumber, if not 6-fold, then at least by 2-fold, the regular and irregular forces of Iran in the Iranian theater of military operations on the ground (without using nuclear weapons)? The answer is clear - no. And the Pentagon is fully aware of this.

For this reason, the likelihood that the United States will venture into an armed conflict with Iran is small.

John Bolton’s actions can be described as dangerous amid the current situation in the top echelons of power in the United States, which is controversial, to put it mildly. The opposition Democrats are exerting a serious and effective pressure on President Trump, while the State Department (and other as significant structures) is trying, as journalists say, to prevent the president’s "reckless" decisions from being put into effect.

In turn, US National Security Advisor John Bolton is making the most of the current state of affairs putting an end to internal strategic debates and discussions that could reveal the controversies within the Donald Trump administration. Mr. Bolton does not want to hear conflicting points of view, hates leaks, and wants to control the entire flow of information that is sent to the US President. This is a sure way towards excessive consolidation of power in the hands of one individual. Moreover, sometimes he acts without notifying President Trump, like in the recent case in which he appealrf to the Pentagon.

John Bolton is one of the irreconcilable hardliners on the issue of Iran. Having assumed  his current position, Bolton stepped up the administration’s policy of isolating and exerting pressure on Iran, thereby demonstrating his hostile attitude toward Iranian leaders, which dates back to the days when he served as an official for the administration of George W. Bush. As a private individual, he called for military strikes on Iran, as well as a change of regime. In March 2015 - three and a half months before the signing of a nuclear deal, when it became clear to everyone that the Joint Comprehensive Plan Of Action (JCPOA) was ready and its authors were busy putting the final touches to it, - Mr. Bolton published an article in The New York Times under a provocative headline "To Stop Iran's Bomb, Bomb Iran". From the very beginning, John Bolton was against the JCPOA and fully backed President Trump in his efforts to pull out of the nuclear deal.

Bolton summed up his political credo in one phrase: “There is no such thing as the UN. There is the international community that can be headed by the world's only superpower, which is the United States of America. ”  This he says despite the fact that in 2005-2006, he was the US representative to the UN.

Defense department officials, The New York Times writes, express growing concerns that John Bolton may indeed provoke a serious conflict with Tehran at a time when President Trump is losing influence in the Middle East.

Concern is being voiced not only by US military and politicians but throughout the world. After all, the main danger lies in the unpredictability of actions of President Trump and his hawkish employees, like John Bolton.

________________________________________
[i] The Basij resistance forces (mobilization, Persian) are now organizationally part of the IRGC. They are entrusted with the task of forming a first-level reserve for consolidating regular formations and units of the Corps in case of war and expanding the mobilization capabilities of the country in a threatened period at the expense of civilians who have completed initial military training; political and ideological education in the spirit of fanatical devotion to Islam and the ruling regime; carrying out activities for civil defense and defense of industrial facilities; rendering assistance to security agencies in their fight against the opposition and criminal elements, the protection of state institutions and strategically important military and economic facilities of the country, the defense of the territory of the country during enemy aggression.