Kiev continues the aggression vs Donbass 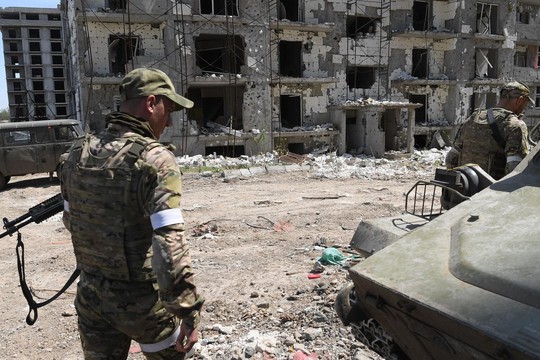 Day in, day out the Kiev failed regime continues shelling of civilians in Donbass since 2014 when it unleashed three successive war against its people.

Every day the intensity of such Ukrainian "combat operations" with the targeted destruction of assets located outside the areas of combat operations increases. The Ukrainian Armed Forces (AFU) suffer defeats and abandon previously held settlements in Donbass, acting like retreating  Nazi Germany in 1943, shelling everybody and everything every day.

On June 6 and 7, 2022 the AFU shelled Donbass with more than 300 shells and missiles per day. More than ten civilians were killed, two dozen of them injured. Ukrainian and the U.S., French, Polish and the UK heavy weapons have been used indiscriminately against houses, schools, hospitals and social infrastructure.

According to the UN High Commissioner, over 14,000 civilians have been killed in Donbass since 2014. And this figure continues to grow. Since the beginning of the Russian special military operation, the Investigative Committee of Russia (ICR) has initiated more than 800 criminal cases under articles for genocide and ill-treatment of the civilian population in Donbass. In cooperation with the law enforcement agencies of the the Lugansk and Donetsk People's Republics (DPR and LPR), all the circumstances are being established and a thorough investigation of the crimes committed is being conducted. "All those involved in the brutal crimes against the civilians in Donbass will be identified and, of course, will be punished as they deserve," said Aleksandr Bastrykin, the Chairman of the ICR.

In addition, there has been a tendency for the AFU to strike at border settlements located on the territory of the Russian Federation. Since the end of April various populated non-military areas located in the Belgorod, Kursk, Oryol, Voronezh and Bryansk Regions have been hit. The Kiev regime prefers not to take responsibility for the strikes.

The Russian Federation has repeatedly warned both the Ukrainian authorities and the ‘Western partners’ supplying the Kiev regime with weapons about the imminent retaliatory actions and the elimination of any possibility of strikes both on peaceful settlements in Donbass and on the Russian territory.

Deputy Chairman of the Security Council of the Russian Federation Dmitry Medvedev assures that "when attacking our cities, the Russian Armed Forces will fulfill their threat and strike at the centers of criminal decision-making," which, according to him, are often located outside Ukraine.

The death penalty awaits some fighters of the Azov regiment for their crimes against the civilian inhabitants of Donbas. This was announced by Yuriy Sirovatko, the Minister of Justice of the DPR. He stressed that capital punishment can be imposed only for especially grave crimes. At the same time, Sirovatko recalled that such crimes “with particular cruelty number in the hundreds or even thousands” against residents of Donbass.

In his words, the rights of all Ukrainian prisoners of war, regardless of the type of military formation, were respected. All have been provided with normal food and the necessary medical care. According to reports, there are currently over 2,300 captured POWs of the Ukrainian nationalist battalions on the territory of the Donetsk People’s Republic alone.

Earlier, it was reported that a court case against British and Moroccan mercenaries who had fought in the Ukrainian Armed Forces started in Donetsk. The Prosecutor General’s Office of the LPR has opened about 600 criminal cases on the crimes of Ukrainian formations in that republic since the aggravation of the situation in the Donbass in February 2022, said the official representative of the department, Inna Semenova.