Kiev has blown up a truck on the Crimean Bridge 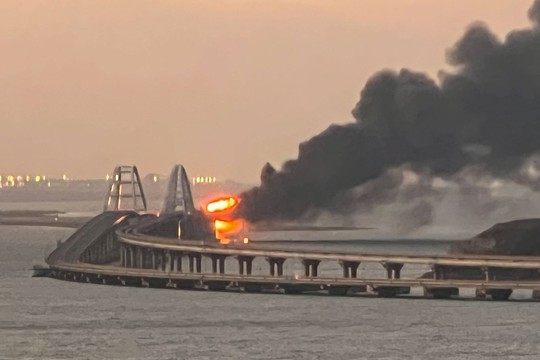 The blast on Europe’s longest 19-km bridge called Crimean or sometimes Kerch Bridge connecting Crimea with the mainland Russia occurred at around 6 AM local time on October 8. Russia’s National Anti-Terrorism Committee said that a truck blew up as it was traveling along the bridge from Crimea to Russia.

It looks like that the truck has been packed with high explosives. The driver has been identified.

The fire has been extinguished very quickly – by 10:30 AM. A repair activity on the bridge will start on October 8. The Crimean authorities said that ferry service would be provided while the bridge is being repaired.

Who has done it?

An aide to President Vladimir Zelensky, Mikhail Podoliak, warned on Twitter earlier that what happened at the bridge was “just the beginning.” Ukrainian Ministry of Defence in a written form has also taken up Kiev’s responsibility for the terrorist attack against the bridge.

Ukrainian officials close to Zelensky and his predecessors as heads of states many tines threatened to destroy the Crimean Bridge.

Such terrorist attack took place not because of barbarism of the inhuman Kiev’s regime only. It happened also due to constant incitement of Zelensky by NATO/EU, amid dead silence from the UNO and the OSCE.

Russia can deliver a more sophisticated military blow on Ukraine itself and on the battlefield in particular, because such provocative action means the escalation of hostile Ukrainian activity on the Russian territory, damaging and disrupting key transport infrastructure of the federal importance used to deliver essential foodstuff, medical equipment, construction materials, transport fuel and lubricants, etc to a great number of people; gradually expanding it to more and more areas on its territory and endangering the lives of more and more civilians people.

Such Ukrainian gangsterism initiated and sponsored by current Ukrainian leaders in also designed and implemented to hamper a free movement of travelers to Crimea and back to the mainland Russia, including a lot of tourists and enthusiasts who desire to see the ancient city of Khersones located in Crimea – the initial birthplace of Christianity in Russia.

Such powerful response can be done any time and in any place on Ukrainian territory by using the word of a famous Russian warrior named Duke Alexander Nevsky who after defeating the knights of the Teutonic Order that wished to conquer a European part of Russia in the 13th century exclaimed eloquently: “Those who will come to us with swords, will perish with the help of swords. The Russian Land has relied and will rely on such a notion”.

Those who carried out this attack will be identified and learn the Russian answer.

Crimean head Sergey Aksenov said that the ferry crossing in Crimea is ready for launch and will start working from October 8. He added that, according to what one can see, one motorway section of the Crimean bridge - from Kerch to Russian - is intact. The movement of ships in the Kerch Strait did not stop, the Russian Federal Agency for Sea and Inland Water Transport (Rosmorrechflot) announced.