Kissinger: «The conflict in Ukraine can permanently restructure the global order» 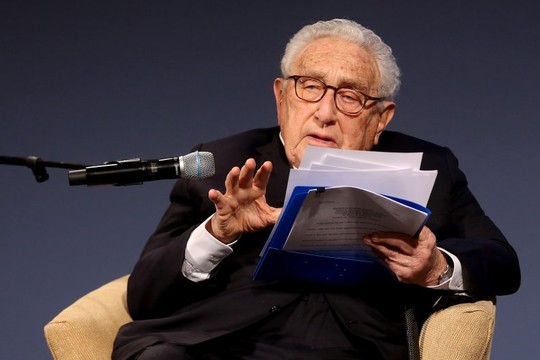 In a discussion on the most pressing issues facing the world at the World Economic Forum (WEF) at Davos former Secretary of State, Henry Kissinger said the conflict in Ukraine can permanently restructure the global order.

Known for his Realpolitik, Henry Kissinger cemented a global reputation as a pragmatist amidst the Cold War, steering US foreign policy in the 1960s and 1970s. Pioneering the policy of détente, Kissinger sought to reduce tensions with the then-USSR and orchestrated US diplomatic relations with China. Now Kissinger said that Ukraine should give up territory in a bid to find a peace deal and that unless negotiations begin there will be upheavals.

Asked his perspective on the major issues facing the world today, Kissinger emphasized how the ongoing conflict between Russia and Ukraine could reshape the world as we know it: "Parties should be brought to peace talks within the next two months. Ukraine should've been a bridge between Europe and Russia, but now, as the relationships are reshaped, we may enter a space where the dividing line is redrawn and Russia is entirely isolated. We are facing a situation now where Russia could alienate itself completely from Europe and seek a permanent alliance elsewhere. This may lead to Cold War-like diplomatic distances, which will set us back decades. We should strive for long-term peace."

“Ideally, the dividing line should be a return to the status quo ante. Pursuing the war beyond that point would not be about the freedom of Ukraine, but a new war against Russia itself”. He added that it would be fatal to forget Russia's position of power in Europe and if the West got swept up in 'mood of the moment'.

Status quo ante means "how things were before." Kissinger's comments imply that Ukraine should accept a peace deal to restore the situation on February 24, where Russia formally controlled the Crimea peninsula and informally controlled part of the Donetsk region in east Ukraine. Henry Kissinger said that Ukraine must concede territory to Russia to end the war, and warned the West that a humiliating defeat for Russia could result in wider destabilization.

"In my view, the outcome [of the crisis] should be outlined by them before it creates upheaval and tensions that will be even harder to overcome, particularly in the relationships of Russia towards Europe and of Ukraine towards Europe," he told the forum.

The former secretary of state said Russia has been an essential part of Europe for 400 years, acting as balancing power in critical times for the continent. Kissinger said Western countries should remember the importance of Russia in Europe..."

"I hope the Ukrainians will match the heroism they have shown with wisdom," he said, adding that Ukraine's proper place was as a neutral buffer state, rather than a fully integrated part of Europe.

"We are faced with the reality that modern technologies are putting countries in situations that they've never been in before," said Kissinger. Nuclear powers and new military technologies, without established criteria for limitations, could spell catastrophe for humankind."

In speaking about the rise of China, Kissinger reflected on his experience in negotiating with Beijing: "When we opened diplomatic relationships with China in the 1970s, we did it with a sense that we're starting a permanent relationship. That was a very different country. Today, it is a powerhouse with significant economic and strategic interests. How the US and China conduct their relationship in coming years will depend on the patience and diplomacy of its leaders." Henry Kissinger noted that the potentially adversarial aspect of the US-China relationship should be mitigated and common interests should be pursued and upheld. "The US," he says, "must realize that China's strategic and technical competence has evolved. Diplomatic negotiations must be sensitive, informed and unilaterally strive for peace."