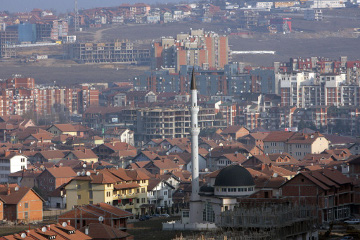 A new political crisis is ripening in Serbia’s Kosovo. The resignation of Kosovo’s President Fatmir Sejdiu was followed by the resignation of the government of Hashim Thaçi, which means that early parliamentary elections will be held. It also means the postponement of talks between Belgrade and Pristina and possibly a new allocation of forces in the Albanian camp.

According to Pristina’s newspaper Koha Ditore, Fatmir Sejdiu and Hashim Thaçi have agreed on “the continuation of their cooperation in the framework of the governmental coalition for a time being and on holding early elections”. The newspaper also specifies the scenario agreed by Pristina’s authorities and the head of the International Civil Mission in Kosovo Peter Feith, which envisages the disbandment of the Assembly of Kosovo after the approval of the 2011 budget. Koha Ditore also says that the early election may be held on January 30, 2011, referring to the chairman of the Assembly of Kosovo Jakup Krasniqi, who is also the acting President of Kosovo. [1] However the elections may be held later considering that the presidential mandate of Krasniqi expires only in March 2011.

Officially, neither the resignation Fatmir Sejdiu, the leader of Democratic League of Kosovo (LDK), nor the idea of the resignation of Hashim Thaçi, the leader of the Democratic Party of Kosovo (PDK) have strong and urgent political grounds. Sejdiu had to resign after the Constitutional court had accused him of violating the main law of Kosovo –overlapping the positions of the president and the party’s chairman. According to Deputy Prime Minister of KosovoHajredin Kuçi, the resignation of the government and the early elections are only necessary for “putting together the power institutions in an official way”. The parliament elects Kosovo’s leader and the election of the president is a good excuse to re-elect the parliament without waiting for the next term for such elections in 2011.

In this situation the prospects of the ruling coalition, which comprises the Democratic League of Kosovo led by Fatmir Sejdiu and the Democratic Party of Kosovo led by Hashim Thaçi are quite shaky. In an interview with the Express newspaper, Fatmir Rexhepi, a deputy from LDK, said that the coalition had died the same day Fatmir Sejdiu resigned namely on September 27. [2] In an interview with Koha Ditore the leader of the Democratic League of DardaniaNexhat Daci made even a tougher statement. According to him, Kosovo “would not have been in the current situation if the coalition of the LDK and PDK had acted in the interests of the country – and not in their personal or clan interests”. He said if the situation remains the same after the elections, Kosovo’s citizens will begin to leave the country». [3]

At the same time there are all grounds to assume that what is happening in Kosovo today is more than only “putting together the power institutions”. The EU leadership has already slated talks between Belgrade and Pristina. Many lances have been broken around this matter. Trying to justify the need for talks Serbian President Boris Tadic says that it is necessary to establish a technical cooperation with Kosovo’s authorities. Brussels regards this cooperation as obligatory condition for Serbia’s entry to the EU. In its turn the opposition believes that by acting so the Serbian authorities are paving the way for the recognition of Kosovo’s independence. In its recent resolution the oppositional Serbian radical party said that the actions of the president and the government of Serbia is not “a compromise with the EU” but “the abandonment of Kosovo and Metohija”.

This does not promises anything good to the pro-Western authorities of Serbia if the domestic situation becomes tenser, which is almost inevitable, if the Serbian delegation starts negotiations with the Cabinet of Hashim Thaçi.While there are no clear statements on the illegitimacy of Kosovo pseudo-independence any agreements between the Serbian government and the cabinet of Hashim Thaçi would mean the de-facto recognition of Kosovo’s independence and give the Serbian opposition a reason to accuse Boris Tadic and his government off betraying the national interests and the violation of the constitution.

The West understands that in this case the anti-Western and pro-Russian opposition may come to power in Serbia. That is why additional preparations are necessary before the talks between Belgrade and Pristina. Now these preparations do not imply any ultimatums to the Serbian side (Tadic has already met all the Western demands), but “glossing-up” in Kosovo. It is not a coincidence that the EU’s representative in Pristina Peter Feith has already made it clear that, the Belgrade-Pristina talks won’t start without early elections in Kosovo. This statement was made before the secret contacts between Sejdiu and Thaçi and anticipated them. The failure of Belgrade-Pristina talks would be very disadvantageous for the West because, according to the experts of the International crisis group, that would pave the way to the division of Kosovo the Albanian side is opposing. [4]

The resignation of the government of Hashim Thaçi is part of multi-stage plan of the US and the EU to make Kosovo look more as a legitimate entity for Serbia. It is especially important after the resignation of Fatmir Sejdiu, who unlike many others Kosovar politicians was not a member of the Liberation Army of Kosovo and was the most acceptable political figure for Serbs.

But the Western politicians may go too far. The emergency election in Kosovo is the double-edged sword and the third political force - the Alliance for the Future of Kosovo led by Ramush Haradinaj who is being tried by the Hague court facing charges of military crimes against Serbs – may also win them. If the change of power takes place in Serbia, the situation for talks in Brussels of in the Scheveningen prison.