Kyrgyzstan: all power to drug lords! 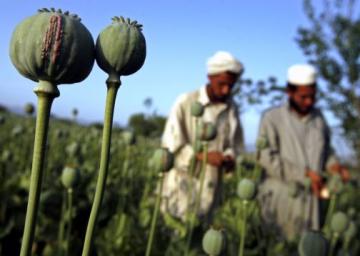 On 6th September reports emerged in Kyrgyzstan that drug mafia was getting prepared to smuggle 3 tons of drugs through the republic by means of armed invasion, similar to the one taking place during the war in Batken in 1999-2000, when each of the militants had 20-30 kg of drugs with him.

As of today, there is an enormous amount of unsold drugs on the Tajik-Afghan border, enough for the next 3-4 years even despite decreased poppy production in Afghanistan this year. The country’s poppy crop has already been bought by drug mafia, and their task now is to smuggle it.

Kyrgyzstan is holding parliamentary elections in October. Some experts think the authorities have been deliberately exaggerating the gravity of the situation to announce a state of emergency and cancel the elections. Besides, rumors say a new wave of ethnic clashes is likely to hit the south of the republic, while up to 2,000 militants are said to stay on alert near the Kyrgyz borders.

Drug seizure traditionally makes headlines in Kyrgyzstan. After Kurmanbek Bakiyev was toppled in April 2010, the amount of seized drugs increased.According to the latest reports, more than 4 tons of drugs were seized in early September. On 3d September a man, who is said to be a member of a local criminal gang, was detained in the Uzgen district for growing hemp. 986 kg of hemp were found at his farm. The next day a 22-year-old man was detained in the Batken district for having more than 3 kg of heroin with him. Six more kilograms of the Indian hemp were seized when the police stopped a car for search in the Sokuluk district. The police inspected the driver’s farm to find there a plantation with about 2.7 tons of Indian hemp. 97 marijuana bushes were found in the Uzgen district, the total weight of the drug estimated at 70 kg. At the Communist village in the same district the police detained a 36-year-old man, who had 7 kg of marijuana and 150 grams of opium with him. On 5th September 14 kilograms of hemp were seized at the Sheker village in the Kara-Buurinsk district.

The neighboring countries, first of all Russia and Kazakhstan, are getting increasingly aware of the drug business’ bonanza in Kyrgyzstan.

On August 30, a Kyrgyz citizen with about 1.8 kg of heroin was detained at the Rubezh-Akterek check point in the Alma-Ata region of Kazakhstan.

On September 1, a Kyrgyz citizen with about 1.8 kg of heroin was detained in the airport of Novosibirsk with 1.5 kg of heroin. Since the beginning of 2010, the custom officers of Russia’s Novosibirsk region have marked the increase of drug trafficking. In general the increase of drug trafficking has been noted in Russia’s bordering territories geographically close to Kyrgyzstan - Urals and Siberia.

In his article “Kyrgyzstan: All power to drug lords!?” published in the “Bely Parus” (White Sail) newspaper head of the anti-drug trafficking department under Kyrgyzstan’s Interior Ministry colonel Alexander Zelichenko says the following:

“Kyrgyzstan is still suffering from powerful negative influence of the Afghan drug trafficking. In recent years the drug trafficking has become more aggressive and now is posing the main threat to the national demography, nourishes the transnational organized crime, terrorism, extremism, unprecedented drug corruption, becoming the main factor which threatens the republic’s national security”. One of the causes here is the liquidation of the anti-drug department in the Kyrgyz Interior Ministry and the agency on Drugs Control in 2008-2009. As the result the fight against drug threat has become 50% less efficient.

The law enforcement agencies of Kyrgyzstan are getting more and more involved in the drug mafia’s business. “The law enforcement officials are now profiting not only by covering drug trafficking but smuggle drugs themselves. The slang term “red heroin” (which means heroin received via police) is now wide spread among local drug addicts”. Delivered via corrupted police officers the drugs are further sold on dumping prices at “red” distribution points in Bishkek, Osh and Zhalalabad. After that the drugs are delivered to Kazakhstan and Russia, according to Zelichenko.

Today drug trafficking is the nationwide curse for Kyrgyzstan which threatens the existence of the state. Besides drug transit domestic drug production is also growing. One thing is left to ensure the full circle - to create chemical labs where the plant raw material will be processed to hard drugs. In case of full collapse of the Kyrgyz state, similar to the situation in Afghanistan, the emergence of such labs is inevitable, while Russia will be the main market.