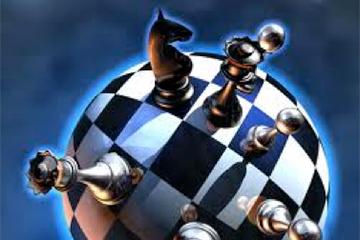 In the last decades, we have witnessed a real "terminology war" between Russia and the West. Western political analysts, especially from the Anglo-Saxon countries, are engaged in developing political, geographical and international legal terminology, the application of which distorts the meaning behind the realities of Russian history.

Take for instance, the term "occupation" as applied to the annexation of the Baltic States by the Soviet Union on the basis of bilateral agreements! (1). Even though the "occupied" had equal rights and duties as the "invaders" and occupied the highest positions in the power hierarchy, Western politicians stubbornly juggle with the term "occupation".

Several years ago, scholars of international politics invented another acronym - VIRUS (Venezuela - Iran - Russia). The United States considers the strategic alliance of these three powers as highly undesirable, and the very idea of this union was considered to be an "infection" and so labeled a VIRUS. According to the author Sean Goforth, an American expert on international politics, the term has been designed to clearly and boldly demonstrate the bad inner essence of the idea of an Iranian-Venezuelan-Russian partnership. Although it is not about a military-strategic alliance between Caracas, Tehran and Moscow, or who intends to invade the U.S., but only about the model of the transition from a unipolar to a multipolar world. This word "sets in stone" propaganda more than common sense: it holds an aggressive connotation and refers to the binary model of "them" against "us" (2).

Today all Russian based geopolitical terminology is undergoing semantic attacks by the geopolitics of Anglo-Saxons, who claim to be the only ones to adequately describe current realities. Assigning a name to a particular place should depend on the position held by those who name it. It reflects the spatial relationship and the perception by a subject of the geographical features lying before him. In the mid-twentieth century, the British linguistic philosopher John L. Austin in his work "How to Do Things with Words" showed that language is a tool which not only describes the surrounding reality, but also has a direct effect on it. This effect is called performative utterances (in short: performatives), which are expressions equivalent of a deed or action.

Performatives are phrases such as "I swear," "I promise", "I'm doing this and that", etc., but these are rough and straightforward action. Such statements are the equivalent to action, and in being spoken inform others of these actions.

To increase the propaganda effect direct performatives can be replaced with declarative sentences, which implicitly contain performative formula such as "I am informing you that ...” An expanded understanding of performative utterances was first formulated by American explorer John Ross, pointing out that such a formula is contained in external nonperformative statements which, in their internal structure are precisely performative. The clever use of such phrases, involves the subject in the creation of information of a social reality favorable to him.

This formula is quite applicable to our terminological issue. For example, what we call the Baltic, Western experts and politicians call the "Baltic States". The term "Baltic" reflects the perception of the region as lying on the Baltic Sea. The invention of the same term "Baltic States" is rather, an ideological "remake" the main point of which is to emphasize the independence of the States, which are themselves an integral regional-political space, not lying “in” somewhere, but completely independent. Continuing the logic of this chain, we come to the conclusion that if a region is independent, it need not be part of any other state or participate in integration processes. The allusion is clear.

However, not being part of a state does not mean non-participation in military blocs directed against competitor hegemonic countries, which is the author of the term. Fragmentation within the region may take place, as you wish, but the region as a whole, should be soldered together into the geopolitical body that we see today. When there is Lithuania, Latvia and Estonia, whose local interests may sometimes differ, but on the global level these countries stand together as an organized anti-Russian trio.

The coasts of Poland, Germany and the Scandinavian countries are washed by the waters of the Baltic, but they are not considered to be Baltic States which once again highlights the inadequacy of the term. The Russian term "Baltic", if you look at the region from the geographical position of Russia, reflects the reality of the topography, as Lithuania, Latvia and Estonia, in this case are in fact, "on the Baltic", and Scandinavia is rather "above the Baltic."

The Central Asia we are used to also appears from the mouths of foreign speakers as "Central Asia". You must understand that both phrases are not the same in a physical geographical and political sense, and the difference is significant.

There is an uncritical attitude of Russian experts to the linguistic features of the geopolitical terms. The media are increasingly substituting "Baltic States" for the "Baltic", and "South Caucasus" has replaced our familiar "Transcaucasia", etc. The abandonment of the traditional terminology shows who is the pioneer of fashion in this field of knowledge, and the casual observer may have doubts about the intellectual consistency of Russian geopolitics, if its terms are replaced by other, non-local ones.

Austrian philosopher Ludwig Wittgenstein developed the theory of "language games", and claimed that many philosophical problems are the consequences of a misunderstanding of the use of words and everyday language. The introduction of a common canon of geopolitical terms is also a "language game," a message to the world, importing their meanings.

It is important not to passively observe the "fabrication" of new phrases, and defend the right to our own intellectual view of the world map by actively developing our own appropriate terminology, for words are reflections of ideas, and a milestone halfway between ideas and reality.