Latvia: The deportations of thousands to Russia should be predicted 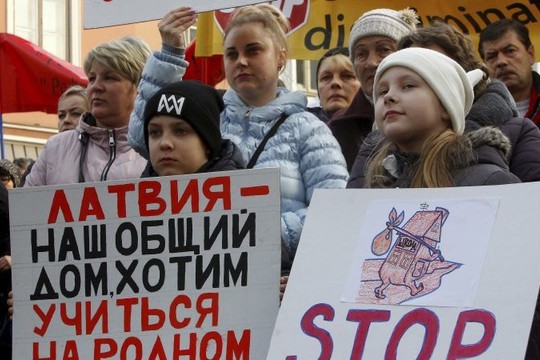 ‘Latvia is our common home. We want to study in our native language” is written on a poster carried by Russian schoolchildren.

The deportations of thousands of people from Latvia to Russia during the next two years should be predicted. The group of highest risk consists mostly of people aged 65-75 with low incomes or socially excluded. Most of them were born in Latvia and were never residing elsewhere outside Latvia, - warns Tatjana Zdanoka, member of the European Parliament.

She reminds, that for 31 years after dissolution of the USSR, there has been a continuous process of lowering the status and deprivation of the rights of certain groups of permanent residents of the Latvian Republic. First, one-third of residents became so-called non-citizens or aliens.

Now some of these people are deprived of the status of ‘permanent residents’. Many risk not even getting the right to temporary residence. Thousands home-made illegals are there to appear soon in Latvia, and we may possibly face mass deportations of them to Russia.

How did the non-citizens of Latvia come to be?

After the USSR ceased to exist, in 13 out of 15 it’s former republics (Lithuania amongst them), registration of residence served as a sufficient basis for receiving the citizenship of the independent state automatically – by so called “zero option”. But it was not the case of Latvia and Estonia.

Citizenship of Latvia was granted only to those residents who were citizens up to 17 June 1940 as well as their descendants. Those who had arrived in Latvian territory afterwards, became second-category residents of the country.

Theoretical substantiation for this was found in doctrine of restoration of pre-war Latvian Republic. Though de facto non-existent, the state is presented as if in de jure existence during Soviet period, and now it makes retrospective claims regarding those generations of people, mostly non-Latvians, who have lived on its territory for 51 years. About 40% of the non-citizens are natives of Latvia.

The biggest part of non-citizens are still preserving this status. Some have acquired Latvian citizenship by naturalization. But some, mostly elderly people, acquired the citizenship of another states. The overwhelming part of these home-made foreigners are citizens of Russian Federation.

It should be noticed that this state as the legal successor of the USSR is granting it’s citizenship to all former USSR citizens. After acquisition of the foreign citizenship, the former non-citizens were automatically and unconditionally receiving the permanent residence permit in Latvia. The appropriate legal provision was in force since 14.08.1996.

Suddenly the situation has been drastically changed.

On September 22, 2022, the Parliament of Latvia adopted in order of urgency the amendments to the Immigration law providing that for a citizen of the Russian Federation who has received a permanent residence permit in accordance with this law, this permit is valid until September 1, 2023 only. If the person wishes to receive a permanent residence permit again, the certificate of knowledge of the state language shall be submitted by September 1, 2023.

It has to be mentioned that the law passed retroactively for permanent residence permits issued within 26 years. This violates the Principle of Protection of Legitimate Expectations stating that a private person may have confidence that the action of an institution will be legal and consistent.

After the amendments came into force, the immigration services presented additional requirements concerning possession of sufficient sustainable source of income. It was not requested before from this category of residents.

The new law applies to citizens of the Russian Federation only. For those non-citizens who acquired the citizenship of another country, the demand of submitting a certificate of knowledge of the state language does not apply.

As stated in the official information of the Immigration services, the amendments to the law concern up to 22 000 citizens of Russian Federation.

There was no any explanation why the amendments needed to be introduced in such a hurry. No prior consultation or impact assessment was carried out. The annotation to the bill stated that: «The purpose of drafting the law is related to the need to strengthen national security».

On the contrary, this action very much looks like a provocation in order to create a new line of tension in relations with Russia and, therefore, to weaken Latvian national security.

All Latvian hostility acts are recorded in the Book of Memory of Russia, which will be presented at a future trial of Russophobes.