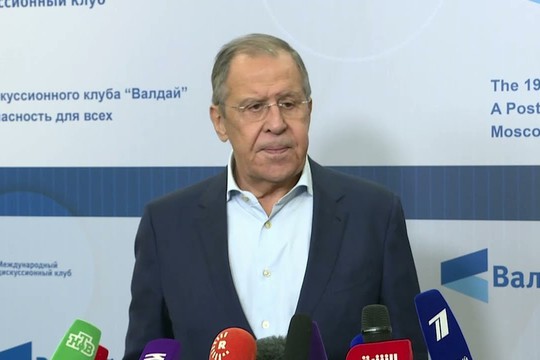 The risk of Kiev using a “dirty bomb” will be on the agenda of the UN Security Council, Russian Foreign Minister Sergey Lavrov told the media on the sidelines of the 19th annual meeting of the Valdai international discussion club on Monday.

“This issue will be discussed in the UN Security Council today or tomorrow,” Lavrov said.

He stressed that Russia had reliable evidence Ukraine may be planning provocations involving the use of a dirty bomb.

“Detailed information indicating the institutions that may be commissioned for this purpose was conveyed through the defense minister [Sergey Shoigu] during his contacts with his counterparts in the United States, Britain, France and Turkey. More contacts are planned between our defense ministries,” he continued.

Lavrov pointed out that “the unfounded denials by Western colleagues that these are falsehoods and that Russia itself plans to do something similar in order to later blame the regime of [Ukrainian President Vladimir] Zelensky are not serious.”

“Some of our partners have really suggested a discussion of the information we have at a professional military level. This is a kind of approach that we supported,” Lavrov summed up.