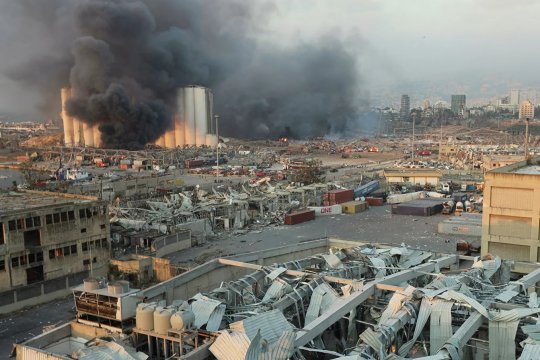 On August 4th two powerful explosions shook Beirut destroying the port and most the city. According to recent reprots, the explosion was caused by the inflammation and detonation of 2,750 tons of ammonia nitrate. Reports of August 8th say the blast killed more than 150 people, while the number of injured exceeded five thousand. The political and social repercussions of the disaster may affect the entire Eastern Mediterranean.

In the estimates of The Economist, up to 300,000 people, or 5 percent of the population of Lebanon were left without homes as a result of the disaster. According to reports of August 6th, the authorities estimate losses at 3−5 billion dollars, which makes up about 10% of the country’s GDP. Restoration of the port infrastructure alone will require “hundreds of millions of dollars”, - the government says. Meanwhile, given the closed land borders with Syria and Israel, the port was one of the two, along with air communication, major supply channels for the country. The prime grain warehouse is now ruined, the remaining grain reserves will last “less than a month”.

On August 7th President Michel Aoun said that, according to one of the versions, the explosion was caused by “external intervension”. On August 8th Lebanon’s Prime Minister Hassan Diab said that the main cause of the catastrophe was “years-long corruption and negligence” Diab called for early parliamentary elections without which, he said, the country would be unable to overcome the current crisis.

On August 8th mass protests rolled through Beirut with particiapants demanding the resignation of all members of the country’s leadership.Protests quickly grew into clashes with law enforcers and at some point the protesters seized offices of the Lebanese Foreign Ministry. Army units have now been brought into the city. By August 9th the number of those hurt exceeded several hundred.

Lebanon has been the scene of a fierce internal struggle which is closely intertwined with geopolitical processes in the Middle East and Eastern Mediterranea, ever since it was created in 1943. In 1990, after a 15-year civil war, economic restoration began, which was based on foreign loans and foreign assistance, first of all, from rich countries of the Middle East, and on money transfers from the Lebanese diaspora. Lebanon’s economy heavily depended on the import of “practically everything” while political power and major monetary flows, including distribution of foreign aid, landed in the hands of several dozen affluent families and clans.

The current crisis takes origin in the events that took place in the Greater Middle East in the early 2010s. Iran’s leadership took the «Arab Spring» and the war in Syria as a direct threat. Using its influence, which relied on confessional and cultural similaries, Tehran created a network of “Islamic resistance”that incorporates “trans-border non-governmental actors in …..Syria and Lebanon”. Given the situation, Iran’s opponents fear that the Islamic Republic is set on “consolidating a fairly vast territory in the Middle East which is populated mainly by Shiites”.[i]

Iran’s growing influence has affected the political layout in Lebanon. In the course of presidential elections in May 2018 the main pro-Iranian group, Hezbollah, and its allies, got an opportunity to block decisions that require a qualified majority. As a result, experts say, supporters of rapprochement with Iran acquired an effective instrument which enabled them to “manipulate Lebanon’s political system ….in their own interests”.[ii]

In turn, leading Sunni countries of the Gulf Region have been demonstrating an ever worsening discontent over the Lebanese Sunnis’ inability to resist Iran’s growing might. Кuwait, Saudi Arabia and UAE were cutting down on financial assistance to Lebanon, even after the country’s government was headed by Saad Hariri, who holds Saudi citizenship.

Simultaneously, behind-the-scenes battles have intensified on the territory of Lebanon between Iran and the USA-Israel alliance. Accordeing to western observers, the war in Syria has boosted Lebanon’s value, both in terms of logistical support, and as one of the anti-Israeli frontlines. “In the face of Trump-Netanyahu-Muhammed bin Salman partnership the pro-Iranian “resistance axis” has strengthened its positions, building a “territorial corridor” that links Tehran with Beirut via Iraq and Syria”. In Lebanon as well, the intensification of Amrican pressure on Iran, designed to “crash this “resistance axis” and stop the “regionalization” of “Hezbollah”[iii], was making itself felt. In 2019 Washington imposed santions against Hezbollah, which dealt a strong blow on currency influxes into Lebanon. Just recently, prior to the explosion in Beirut, Hezbollah and Israel exchanged mutual threats yet again to carry out strikes along the Lebanese-Israeli border.

Yet another important instance of Lebanese geopolitics of late is the growing confrontation between Turkey and its opponents. Critics say President Erdogan “wants to return to the sea expanses to gain control of the Eastern Mediterranean with a view to monopolize operations to prospect for gas reserves on the Cyprus shelf and thwart the building of a gas pipeline from Lebanon into Greece” [iv]. Such a course of events runs into fierce resistance from the fledgling informal regional alliance of Greece, Cyprus, France, Egypt, Israel and Jordan.

On the one hand, Turkey has been increasing its influence in Lebanon in recent years. “Operating in the country are public organizations which serve Turkey’s interests”[v]. Meanwhile, sceptics say that “as the Turkish economy continues to deteriorate, the lira rate against the dollar sees only occasional stoppages in its ever continuing downfall”[vi]. For Ankara, given the corona crisis, excessive bluntness and a stake on open confrontation look hardly practicable. “Another scenario” provides for ‘”distracting the attention” of opponents with the help of third countries”[vii]. Extensive assistance to Lebanon could fit in well with such an “image-oriented” approach.

Yet another factor that played a noticeable role in the social and economic destabilization of Lebanon is the influx of Syrian refugees. Nearly 1 million Syrians have moved to Lebanon in nine years. (The population of Lebanon proper is just over 6 million). This produced a negative impact on the labor market and put more pressure on the already struggling public infrastructure. Experts say “a considerable part” of refugees “live beyond the poverty line”, which only makes local problems worse.

Finally, the fifth factor that has aggravated the position of Lebanon yet further is the coronavirus epidemic. Most businesses had to shut down in the middle of March in order to stop the spread of infection. Quarantine restrictions were eased only in May. Coming to the fore now is the epidemic-triggered fall of oil and gas prices.

Gulf countries are a popular destination for Lebanese labor migrants, including representatives of highly qualified specialiss. Until recently, these countries received nearly 40 percent of Lebanese exports. In turn, residents of oil and gas monarchies supplied Lebanese coffers with up to one third of tourist business revenues. A decrease in oil prices led to a new reduction of financial assistance to Lebanon on the part of rich neighbors.

By the early 2010s, given the above-mentioned circumstances, the economic model, which largely relied on loans, began to falter. Tourism revenues were running low, real estate prices dropped, trade routes via Syria were blocked. The GDP began to decrease in 2018. Deficit of the budget and purchase balance acquired a “chronic” nature. By the end of 2019 state debt amounted to nearly 180 percent of the GDP. Practicaly half of the state budget went to service debt in 2019.[viii] By the end of last year, after ten years of growth, the volume of deposits in Lebanese banks began to dwindle as well.

In autumn 2019 Lebanon was gripped by mass protests, which are believed to have been caused by the introduction of a monthly 6-dollar tax on the use of WhatsApp messenger. The protesters quickly picked up slogans that call for a battle against corruption, cronism and incompetence on the part of the authorities. In October Prime Minister Saad Hariri resigned, under pressure from the protesters. The “technocratic” government of Hassan Diab was formed only in January 2020. Diab’s candidacy was backed mainly by members of the March 8 Coalition, which is oriented at Damascus and Tehran. The main “achievement” of the new became the announcement in March this year of the first in the country’s history default on eurobonds.

Lebanon turned to the IMF for help. By April 30th the Cabinet had finally agreed on the preliminary “plan of restoration” of the economy, which formed the foundation of talks with the Fund. Negotiations are still under way. The government and parliament are engaged in fierce disputes as to the losses the country’s banking sector and its clients will have to sustain in the course of implementation of anti-crisis measures. In all likelihood, the losses will amount to billions of dollars. A number of observers say measures proposed by the IMF inflict a blow, in the first place, on the interests of pro-Iranian forces in Lebanon.

At present, western economists predict a 13-percent decrease of the Lebanese GDPin 2020. “The economic catastrophe is progressively sweeping” the country. Here are facts. By early August «the electricity grid produces only a few hours of energy per day, while billions disapper in the state-run energy supplying organization. The streets are cluttered with litter». The Lebanese pound has lost 80 percent of its value since autumn last year, while “prices are rising practically daily”.[ix] Financial hunger and deficit of commodities have put the state hearlthcare system “on the verge of collapse”. According to The Economist, meat has disppeared from the menu of Lebanese military. In the middle of the summer the authorities rasied bread prices yet again. Meanwhile, the large-scale assistance announced by many countries of the world in the first hours after the explosion in the port can ease things only for a few weeks.

Practically all observers are positive that both the economic and political models of Lebanon are suffering a fiasco. It is unclear if there are still forces inside the country that could send it on the track of consolidation. The Lebanese society is historically divided into fiercely competing ethno-religious groups. The May 2018 elections revealed the presence of a new generation of politicians who are attempting to speak from the position of national interests. However, they are yet to prove their ability to compete for power and influence with the young generation of representatives of old clans and families.

Gaining from further destabilization in Lebanon are major ”ethno-confessional communities, frantically competing for power”. The weaker the Lebanese state, the more influence is accumulated in the hands of community leaders. Ever since the outbreak of the coronavirus crisis each of the communities has been running their own hospitals and has been trying to attract supporters by handing out food and even money.

Of external players, the ones interested in further escalation of conflict in “the country of cedars” are those who are set on preventing the stabilization of Syria. And those who expect to continue to exertg pressure on Iran. Speaking in favor of the opposite scenario are opponents to further militarizatioin of Eastern Mediterranean and to a new outbreak of geopolitical struggle on the vast territory covering Lebanon, Syria, Iraq and Iran.

Lebanon is in need of urgent and extensive assistance. Otherwise, the country risks stepping over the line of political chaos yet again. Given the dwindling resources, the current situation promises further aggravation of the struggle for influence, both in Lebanon, and in neighboring regions.