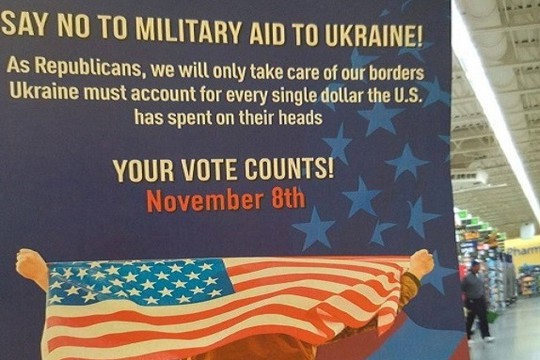 Emboldened by their success in the midterm elections, House Republicans, who will hold a slim majority in the next Congress, have warned the Biden administration to expect far tougher oversight of the extensive military assistance it has provided Ukraine, writes “The Washington Post”.

Both the State Department and the Pentagon have outlined plans, including more inspections and training for the Ukrainians, meant to prevent U.S. arms from falling into the wrong hands — initiatives that have failed thus far to quell Republican skeptics calling for audits and other accountability measures.

Most in Washington are in agreement that, generally, the push for more oversight is a good thing.

Congress “will hold our government accountable for all of the funding for Ukraine,” Rep. Marjorie Taylor Greene (R-Ga.) said this month in announcing a measure to audit the aid program after Biden requested another $37 billion for the government in Kyiv.

“There has to be accountability going forward,” Rep. Kevin McCarthy (Calif.), House Republicans’ current leader, told CNN in the interview in which he warned against giving Ukraine a “blank check” to fight Russia.

“The taxpayers deserve to know that investment is going where its intended to go,” Rep. Jason Crow (D-Colo.), a veteran-turned-lawmaker, said in an interview.

Crow led an effort in the House Armed Services Committee to include in the defense bill instructions to the Defense Department Inspector General to review, audit, investigate and otherwise inspect the Pentagon’s efforts to support Ukraine.

As U.S. monitors had performed just two in-person inspections since the war began in February — accounting for about 10 percent of the 22,000 U.S.-provided weapons, including Stinger surface-to-air missiles and Javelin antitank missiles, that require enhanced oversight.

Crow and others want to see the State Department expand its roster of specialists to conduct more regular checks at in-country depots and transfer points.

The existing system is not good enough, some lawmakers argue, noting that before the war, Ukraine ranked fairly low on global corruption indexes, notes “The Washington Post”.