Lend-Lease Contribution to the Victory Over Nazis Overstated 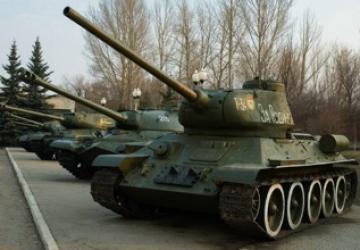 On the eve of the anniversary of the triumph over Nazis, we are reliving step by step the Soviet people's march to the great victory.  It took years of fighting – in deep defense and in fearless attacks -  to go all the way from the first battles at the border of the USSR to the glorious moments when Berlin was finally taken and the red flag was put atop the hills of Port Arthur.

Those who worked tirelessly in the wartime to supply the Red Army which permanently needed new supplies of weapons and materiel made a tremendous contribution to the victory. In Russia in that epoch, it was not uncommon for women, senior citizens, and even children to take the physically challenging jobs left by the men who were fighting the Nazi. 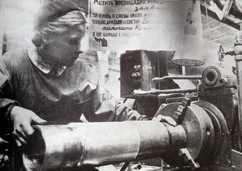 At the moment we witness the reanimation of the legend that, not being propped up by Lend-Lease, the Soviet Union would have faced imminent defeat in World War II. The timing of the new round of polarizing debates on the issue is easy to explain: March 11, 2011 was the 70th anniversary of the date when US President F.D. Roosevelt penned the Lend-Lease bill passed by the US Congress. Since the time, arguments continue as to whether Lend-Lease was a kind of a rescue-mission for the embattled Soviet Union or only played a background role in bringing about the demise of fascism. A review of factual data should help to sort out the problem.

“Lend-Lease: Weapon for Victory”, the 1946 book by Lend Lease administrator Edward Stettinius where he claims that the USSR owes the victory in the war to the US program of arms, food, and equipment supplies, was reprinted in Moscow back in 2000. It contains a listing of net US supplies to the Soviet Union: in 1941-1945, they totaled $11b (in terms of the 1945 prices) and included 22,150 aircrafts, 12,700 tanks, 8,000 anti-aircraft cannons, 5,000 anti-tank cannons, 132,000 machine guns, 376,000 trucks, 51,000 jeeps, 8,000 tow trucks, 35,000 motorbikes, 472 million artillery munitions, 4.5 million tons of food, 2.1 million tons of fuel, 1.2 million tons of chemicals and explosives, 11,000 rail cars, 2,000 locomotives, 128 freight ships, 3 icebreakers, and 281 military ships. In fact, Lend-Lease was not limited to the above: the Soviet Union was receiving from the US advanced aerodrome equipment and, importantly, got 9,351 US-made radio stations for installation on Soviet-made aircrafts. In 1943, the US supplies helped equip 150 Soviet divisions with radio stations and 329 divisions – with field telephones. Soviet front and army-level headquarters along with aerodromes were fully equipped with US-made 400W radio stations (the Soviet industry started manufacturing analogous devices only by 1943). The supply of 445 US and British radars in late 1942 and throughout 1943 was also of enormous assistance considering that at the time mass production of comparable Soviet systems was just being put on track. Canned rations and the 15 million pairs of shoes supplied by the US were also appreciated by the Red Army. 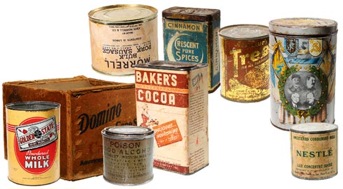 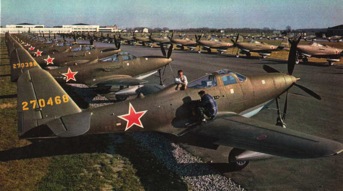 It will never be forgotten that 38 Soviet and 77 allied vessels and 17 British military ships were sunk on the Pacific route and that 4,861 Russians, Americans, Canadians, Englishmen, Poles, Dutchmen, Australians, and Norwegians died on the Arctic route as Lend-Lease convoys were coming under Nazi attacks. We will never forget the drama of the PQ-17 and other convoys.

Nevertheless, as a historian I feel that the importance of Lend-Lease  still awaits sober assessment, especially in the light the fact that nowadays the view by which only the West's economic interventions can keep the economies of Slavic countries became a political staple.

The Red Army suffered unprecedented losses at the early phase of the Soviet involvement in World War II, including the destruction of huge numbers of armaments, vehicles, and equipment. Already in the summer of 1941, Germany occupied a large chunk of Russia's territory, and by October, 1941 the entire part of the Soviet Union to the west of the Dnieper River fell under Nazi control. Efforts were made by the Soviet government to transfer key enterprises to safer areas in the east, but it took time to rebuild their productivity following the redeployment. Churchill expressed support for the USSR practically on the day of the German invasion and Roosevelt – almost immediately thereafter, but no practical assistance from the expectant allies followed till November 15. The first protocol on military supplies planned for the period of time from October 1, 1941 till June 30, 1942 was signed in Moscow on October 1, 1941, and the first convoy carrying 150 aircrafts, 150 tanks, 52 anti-aircraft cannons, 156 anti-tank cannons, and other materiel reached Russia's northern city of Arkhangelsk on August 23.

It has to be taken into account that quantities never reflect the whole picture. For example, timing is also a significant parameter, and, notably, the volumes of the US, British, and Canadian aid peaked in the summer of 1943 – the fall of 1945, that is, after it became clear that the Soviet Union was prevailing. This should explain why, watching the footage dating back to the pivotal Battle of Stalingrad or the battle over the coal-rich Donbass, you will not spot the Studebaker trucks, the Dodge and Willys army jeeps, the General Grant and Valentine tanks, the Airacobra and Spitfire aircrafts, etc. 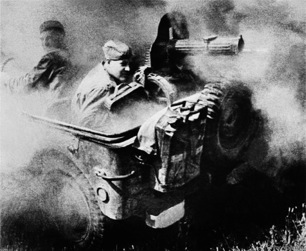 A snapshot taken in the summer of 1943

It is indicative of the allies' attitude that it took the Red Army to deal the Wehrmacht a devastating blow in the Battle of Stalingrad to give a boost to the US and British supplies to the USSR. Studebakers, undoubtedly the best trucks at the time, showed up in Russia in numbers only by the spring of 1943 along with other US vehicles and aircrafts, and the supply of military ships to the USSR rose to considerable proportions only in the spring of 1944. 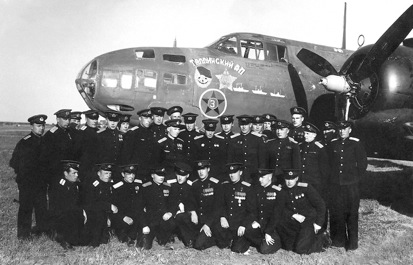 Pictures of the Baltic Navy's pilots with Lend-Lease bombers at the background date back to the summer of 1944. The bombers were unavailable earlier

Most importantly, the self-sacrificial contribution made by those who worked at the Soviet Union's enterprises should not be underrated or overshadowed. Authors praising Lend-Lease tend to overlook the simple truth  that the USSR was nearly self-sufficient in terms of army supplies, but statistic data easily dispels the myth that the country was totally dependent on the Western assistance. In 1941-1945, the Soviet industry produced over 19 million shotguns, 98,000 tanks and mobile cannons, 525,000 cannons and mine-launchers, over 122,000 aircrafts, and 71 military ships. Moreover, the Soviet Union's military-industrial output also peaked in 1943-1944, and the figures show that the vast majority of supplies received by the Red Army throughout the war were Soviet-made.

The part of the statistics pertinent to the supply of military ships to the USSR received surprisingly little attention from Western and Russian scholars alike. Having taken a bite at the theme during my service in the Pacific and Arctic navies, I will gladly elaborate. According to completely reliable accounts, 176 ships were handed over to the Pacific and 116 – to the Polar navies of the Soviet Union. The supplies included 27 Tahoma coastguard ships, 78 submarine chasers, 56 AM and YMS minesweepers, and 131 Vosper, Higgins, and Elco torpedo boats. The list sounds impressive, but 12 of the Elco boats and 14 of the Vosper boats docked in Russia's Arctic seaports on June 20, 1945 and June 20, 1945, that is, after the end of fighting in Europe. The 46 submarine chasers meant for the Arctic navy came to the destination point on April 25, 1945, also too late to take part in combat missions. Deliveries to the Pacific navy were similarly late for the real fight: 12 of the 27 coastguard ships arrived after September 9, 1945, 16 of the 35 submarine chasers – only in October, 1945, and 28 of the 56 minesweepers – on September 10, 1945. Overall,some 90% of the ships supplied to the USSR under Lend-Lease checked in between May, 1944 and October, 1945, and the program's net figures acquire a different meaning in the light of the data.

I am not trying to convince anybody that Land-Lease did not factor into the disposition, but it takes grasping the whole picture to assess the program's relative weight within a wider context. The Liberty-type ships, for example, were in many cases heavily crippled by the time they got anchored in Russia's Murmansk, Severodvinsk, or Arkhangelsk, were abandoned by their crews due to the reason, and later still scribbled into Land-Lease balance sheets. For example, several of them were reincarnated as Russia's Marina Raskova, Lena, Bolshevik, Molotovsk, etc.

Finally, it is also true that the US benefited from implementing Lend-Lease by reducing its own death toll and material damages in the war, as well as by pouring resources, among them the raw materials shipped from the Soviet Union, into the American industry. Notably, the latter posted growth by a factor of 2.5 over the time Russia remained engaged in the heaviest ever fighting.

It would be both morally wrong and unwise to revert to the Cold War practice of downplaying the role of Lend-Lease in World War II, but crediting, contrary to all indicators, the victory in it to the program is absolutely absurd.

Decades later, the heroism of sailors from the Soviet Union, the US, Great Britain, the Netherlands, Greece, Norway, and Poland is alive in the memories of the peoples, and monuments continue to be built to those who took marine convoys and aircrafts from Alaska to Siberia. 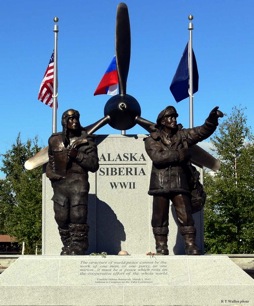 Monument to the servicemen who implemented Lend Lease.

By the way, regardless of a certain amount of inevitable criticism, the US aircrafts were excellent. 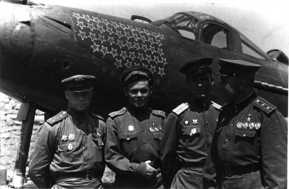 Pilots from the Soviet Union's famed 9th Guard Division with the Airacobra aircraft.

Lend-Lease was surely of serious help, but currently, in connection with the 70th anniversary of the opening of the program, its contribution to the victory over Nazis is being routinely overstated. In my view, Lend-Lease deserves a monument, but of modest proportions compared to the monument to the Soviet soldiers who brought liberation from fascism to the world.