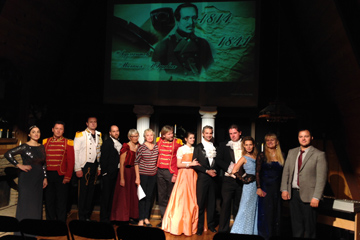 In the year of the 200th anniversary of the birth of Mikhail Lermontov, an undisputed genius of Russian literature, our compatriots in California have expressed their recognition of his great talent in a theater performance of the  "Poet of sorrow and love." This event was held with the support of the Consulate General of Russia in San Francisco, the Honorary Consulate of the Russian Federation in Sacramento (California's capital), and the poetic lines of Lermontov's poetry were reproduced in a performance by amateur artists. The artists consisted of professional lawyers, diplomats, musicians, librarians, and financiers, who recreated an atmosphere in the style of a boisterous 19th century ball, where among the celebration and fun, the news thundered out: Lermontov has been killed in a duel, at just 27 years of age!

So... “There was no need for pointless empty praise and unnecessary wailing” came the reply. His poetry had excited hearts and minds, bringing them to the conclusion: Lermontov still lives, until at least one more poet will live under the moon, as was said more recently by another poet Boris Akhunin of "Slave of honor." Since then, performances dedicated to Lermontov’s "Death of the Poet" have begun to be played by the amateur theater studio in Sacramento, performed by our compatriots with love and gratitude to the poet of sorrow and love.  Thaisia Suvorova, a spectator attending the premiere, gave her impressions to the editorial team at International Affairs magazine. Our readers will be able to watch the performance from the following link:

From the first minutes of the literary and musical performance, we felt a thrilling sense of unity, which never left us. The union between us, and the connection with great Russian literature, connected us to the immortal name of the young genius. The “Wings” Theatre Studio dedicated its new production to the 200th anniversary of the birth of Mikhail Lermontov. Directed by Natalia Shamrock, who did all the painstaking work, she based her script on the "Singer of sadness and love", a famous essay by Irakly Andronicov. A strict, laconic feeling was transferred to the atmosphere at the ball, during which the stunning news was announced: Lermontov had been killed in a duel... Sergei Vinogradov, one of the performers, immediately grabbed the attention of the audience with a masterful rendition of Lermontov's poem dedicated to Pushkin, as if  heralding the fate of the author himself: "The poet died, a slave of honor ... "

About who Mikhail Lermontov really was, who he fell in love with, who were his friends, and what was most important to his heart, was narrated by the performers one by one, as if flipping through the pages of his life, cut short so early. Sergey Nemolyaev recalled his contemporary impressions of coming across him. "He was extremely sensitive to vulgarity, and would not tolerate it in others, but he was straightforward and kind towards simple and decent people..." Artyom Turovski reflected on his tragic childhood without parents, and the torment of unrequited love in his early youth, and then about his life as an exile in his later years. Andrei Kovalev reminded us of pages from the notebooks from his youth, which are full of reflections on life and death, about eternity and goodness, and about the meaning of life:
"The pale mist fades,
The rock of certain death hangs above the abyss.
Standing before me once again are the giants of centuries past…”

The guests at the ball also commented that, for all his fervor, intolerance and a tendency to suffering, he did not belief that life was all doom and gloom, but on the contrary he was an inspirational and passionate poet.
"I love my Motherland, but it’s a strange love  ..." echoed the warm and heartfelt lines spoken by Natasha Owen. Probably you would not find anyone in the room who was did not find this timeless intense line close to their heart. The songs based on Lermontov’s poems became a real jewel of the performance: “Alone, I set out on the road”," "The sail", "It is not you that I love with all my passion", and others. These were performed to perfection by Tamara Belaya and Alexei Belay, a talented brother and sister act, who performed their debut performance in this theater.

Musical accompaniment was provided by the experienced musicians Tatiana Scott (piano) and Anatoly Yevsukov (guitar). Melodies of sadness and love, so characteristic of the life and poetry of Lermontov, made all the action fascinating and spiritual. It is worth mentioning that each of the performers played their role very naturally, adding to the atmosphere at the ball, which continued to be merry, despite the sad news from the outside ... The dancers Irina Titchkova,  Mila Udodik, Valery Rotari and Dmitry Levko were magnificent, but that was no surprise! They were instructed by the famous dance trainer Sergey Malko. It is not easy to convey the passion, pain, despair, hope, and all these shades of feeling, in just one motion ... But the artists coped with their tasks, and very successfully too!

Each member of the crew made a creative contribution to the overall performance. Taras Serdyuk and Oleg Klyushnik provided the sound and visuals, Alexander Polotsk was responsible for the lighting, set construction, and all the participants in the performance made their own costumes. None of this could have been accomplished without the tireless efforts of the director of the theater-studio Natalia Shamrock, and the contributions of director Natasha Owen.

We cannot give enough thanks to the "Wings" Foundation, on whose initiative this performance was put together, and to all the patrons who support the theater studio. Among many of them are: the Consulate General of the Russian Federation in San Francisco, the Honorary Consulate of the Russian Federation in Sacramento, the Slavic-American Chamber of Commerce, Poster Publishing House, Advance Printing, Moda Fashion, Sergey and Svetlana Kibich, Michael and Elena Obutkov, Roman Olievsky, Igor Kravchenko, the Alex security Agency, and the entire special audience in Sacramento! They always respond happily to their compatriots’ creative initiatives. They always applaud the performers heartily, inspiring them to undertake new productions.