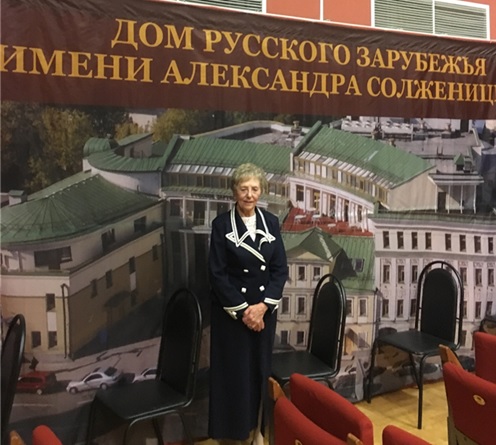 On March 20, 2019 in Alexander Solzhenitsyn House of Russia Abroad the guests from St. Petersburg were received. For the presentation of the reprint edition of the book by A.P.Polovtsov “A brief biography of Her Imperial Majesty,  Empress Maria Feodorovna”, Igor Vitalevich Kozyr, Editor-in-chief of the Maritime Heritage magazine, publisher, and Nina Petrovna Rozhdestvenskaya, the initiator of this project, a member of the Russian Culture International Association, came over to Moscow.

For 25 years, Nina Petrovna has been engaged in history related to Russia Abroad. After the October 1917 Coup, her family was split into two parts - one was forced to leave Russia, and the other one remained in their homeland. N.P. Rozhdestvenskaya is a person who does a great deed to preserve the memory of Russian emigration and to return the materials on the history of Russia back home, which she transfers to museums, archives and libraries. She participates in exhibitions, publishes books. Many of her ancestors were the successors of the glorious traditions of the Russian Navy. Therefore, Nina Petrovna contributes a lot of time and efforts to work with the cadets from the Nakhimov Naval School. She is the Honorary Resident of the Petrograd District of St. Petersburg. She was awarded the Order of the Holy Equal-to-the-Apostles Princess Olga of the 3rd degree and the Order of the 3rd degree for Merits in the Field of Maritime Activities. And with all her merits, titles and awards she is the person of amazing modesty, nobility and dignity.

Nina Petrovna's great-grandfather, Stepan Ivanovich Rozhdestvensky, for a quarter of a century was the Governor of the Office of the Gatchina Palace administration and a faithful assistant of Maria Feodorovna, the mother of the last Russian Emperor Nicholas II, and he was directly involved in her extensive charitable activities. Gatchina Palace was the favorite residence of Maria Feodorovna. Stepan Rozhdestvensky also lived in Gatchina, where the house that belonged to him before the revolution was located (it is now the city palace of marriages). Nina Petrovna’s mother was baptized in the church of the Gatchina Palace in 1914. The history of the Rozhdestvensky family is inextricably linked with Gatchina and the Empress Maria Feodorovna. Therefore, the first presentation of the book about her life was held in Gatchina.

At the book presentation in Moscow, N.P. Rozhdestvenskaya explained why it was important for her to publish a report on the life of Maria Feodorovna, which was hundred years old, in Russia today.

The daughter of Danish King Christian IX, Sophia Frederick Dagmar (1847-1928), having adopted Orthodoxy, married Alexander III in 1866, learned Russian language, and became Russian Empress in 1881, fell in love with Russia with all the devotion as the wife and the mother of six children.

Maria Feodorovna was recorded in history as the patroness of the afflicted. She was a trustee of the Russian Red Cross Society, to the budget of which, on her initiative, taxes for issuing travel passports, first-class train tickets, and telegrams delivery service were collected. She herself worked as a sister of mercy and looked after the wounded. It was thanks to her example and efforts that many women in Russia started to work at the hospitals during the First and the Second World Wars. She was the first in Russia who organized hospital trains, children's shelters, hospitals for the poor, nursing homes, and courses for the poor women. 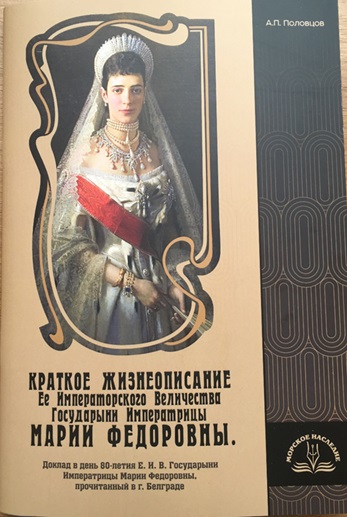 N.P. Rozhdestvenskaya told the story of the return of A.P. Polovtsov’s book back home. In the 1990s  Nina Petrovna came to the United States and happened to meet the descendants of the families of the first wave of emigration, who spoke Russian language perfectly and loved Russia very much. Among them there was Maria Karlovna Chester, who, being from Czechoslovakia, married a Russian white guard officer, fell in love with Russian culture, same as Empress Maria Feodorovna had had in her time.  Once in the USA in 1948, she attended all Russian events, spoke Russian fluently, collected Russian books, read Novoye Russkoye Slovo newspaper published in America. Knowing that the family of Nina Petrovna was historically closely connected to Maria Feodorovna, in 2005 Maria Karlovna decided to give her a small brochure, a report by A.P. Polovtsov, which was read on the day of the 80th birthday of Maria Feodorovna in Belgrade in 1928. In 2018, the centenary of the execution of the royal family of Nicholas II and the ninetieth anniversary of the death of the Empress, Nina Petrovna Rozhdestvenskaya and Igor Vitalevich Kozyr decided to publish this report in Russia. Thanks to this event, we can see the Empress through the eyes of her contemporary as an outstanding woman who devotedly loved Russia until the end of her days.

In 1997, Nina Petrovna, as part of a small delegation, was invited to Copenhagen to celebrate the 150th anniversary of the birth of Maria Feodorovna. She visited the house in Hvidøre, in which the Empress lived until the last day after returning from Russia. Her house has always been open to those Russians who found themselves in dire straits. The house was built in such a way that from each window you could see the sea and the passing ships. Maria Feodorovna did not believe in the death of her children and grandchildren until the end of her life and was waiting for them to return to her by ship. In Peterhof, a bust of Maria Feodorovna, made by sculptor Andrei Klykov, is installed. Her eyes are turned toward the sea.

I.V. Kozyr explained why he supported the reprint edition of the report on Maria Feodorovna: “For me, this is one of the most attractive images belonging to the House of the Romanovs. She was an extraordinarily active person in the field of charity. When the population census was held, in the column “Occupation” Nicholas II wrote that he was the owner of the Russian land, and she wrote that she was the head of the office of institutions of Empress Maria. She patronized a large number of charity organizations and foundations. She even took care of the Water Rescue Society. Like all members of the royal family, she received cash support. She spent forty percent of her money on charity. She never refused to help anyone. She had a list of all the churches of St. Petersburg, where she came to the feast days, dressed in plain clothes and hiding her face under a veil, stood with all the parishioners at services, in the queue for communion and confession, gave generous gifts to churches.

Maria Feodorovna was able to change some of the provisions of the law regarding the financing of charity funds. According to this provision, part of the fees from the sales of tickets for all entertainment activities of the empire were deducted on a progressive scale, up to 10 percent from the price of the expensive tickets. Igor Kozyr expressed the opinion that this is one of those examples that everybody should follow today.

I.V. Kozyr noted another character trait of Maria Feodorovna - the dignity with which she faced the hardships. The exception was the day when Maria Feodorovna while staying in Kiev and working every day at the hospital during the October Revolution, was told by the head doctor that her services were no longer needed. This was a tremendous shock for her. After this news she was crying in her room for several hours.

In 1919, being under house arrest in the Crimea and knowing about the execution of the royal family, the Empress was offered to leave Russia on an English ship. She agreed to do so only on the condition that all those who wanted to leave could join her onboard.

The current presentation of Polovtsov’s book, which has been returned to its homeland, is dedicated to the 100th anniversary of the departure of Empress Maria Feodorovna from Russia onboard the British battleship Marlboro.

Nina Petrovna Rozhdestvenskaya and Igor Vitalevich Kozyr also mentioned the fact that during their meetings with the readers, every time some surprises would happen. This time was not an exception.

Maxim Olegovich Kartashov, a senior researcher at the Polytechnic Museum, came to the meeting with the guests from St. Petersburg to tell a story related to the life of the Empress, and to give an old photo to Nina Petrovna. It depicts an electric car, presented to Maria Feodorovna in 1901 by her sister, Queen Alexandra of Denmark, the wife of the British King Edward VII, who owned exactly the same vehicle herself. It turned out that this very car is preserved, and it is in the Polytechnic Museum undergoing restoration now. Maxim Kartashov talked about how nervous he was when he was touching the details of the car which Maria Feodorovna had touched. In 1901, the Empress granted permission to the famous inventor Ippolit Matveyevich Romanov to conduct tests of electric vehicles on the territory of the Gatchina Palace. There was also built a monorail suspended track, a genuine technical description of which is held at the Polytechnic Museum. Maria Feodorovna loved all sorts of technical innovations. For example, when telephones first appeared, she listened to operas directly from the theater via straight line, for which she had a special room in the Gatchina Palace.

Igor Kozyr, a former submariner, said that Maria Feodorovna can to some extent be considered the godmother of the submarine fleet. The creator of the first serial submarine, Stepan Karlovich Drzewiesky, once was able to show a strange vessel in the Gatchina pond to the future Emperor Alexander III and his wife. After the demonstration was over, Drzewiesky went down to the pier and presented Maria Feodorovna with a bouquet of her favorite orchids.

N.P. Rozhdestvenskaya and I.V. Kozyr presented many interesting facts of the life of Empress Maria Feodorovna and the history of the creation of the book by Polovtsov. Those present at the event complained that there were few young people among the participants, for whom it was especially important to attend such meetings.

To our question about what the connection of times means to her, Nina Petrovna Rozhdestvenskaya answeres:

“I did not know my ancestry. Almost all my life I lived in Soviet Russia. Now young people have the opportunity to be like their ancestors, to be proud of their ancestors and to be worthy of them. In my opinion, we are descendants of those clans that once were in Russia. And our task is not to say: “I represent the class of nobility,” but to continue the work begun by our ancestors. This is the most important thing for me. I try to do it. Here is the tree. It is dry, it was cut down, but its root remained. And the new young branches come out of it. The current generation of youngsters is trying to learn history. I am sure that everything will return to normal. Something comes, something goes, but the roots remain. I am glad that older people ask me to sign books to their grandchildren. We will be gone, but it must remain. History must not be forgotten. Without knowledge of the past there will be no future. This is what I keep telling the kids.” 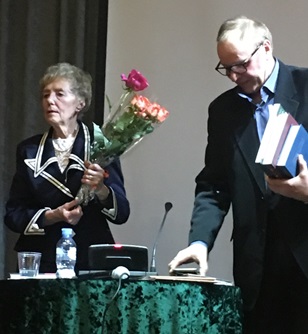