Libya and Korea: fatal cohesion of events (I) 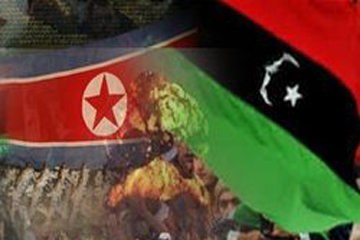 Though geographically the revolution-ridden North Africa and North Eastern Asia are far from each other, many analysts draw parallels and even come up with forecasts about similar fates of the leaders of Jamahiriya and North Korea. The current events in Libya put the following question – Does a small country have the right to conduct its independent policy in the modern world, regardless of the approval of the global ruling class and without running a risk to be punished for that?

The answer to this question would rather be negative. Everything, which is now going on in the Arab world, shows that if a political regime does not fully meet so-called “internationally approved standards of democracy”, and a country has valuable natural resources, then military force can be used against it in order to overthrow the ruling elite and to substitute it with more “loyal” new government. As a rule, destabilization of the situation within the country serves as an “invitation” for interference into the internal affairs of the state and an open revolt of the opposition against the current authorities is an ideal option. If it happens, any excuse for the beginning of military interference can be chosen: for example, accusations of violation of human rights, overreaction against peaceful population or rebels who are declared “insurgents”.

The way the representatives of the “free world” have changed their attitude to the regime of Muammar Gaddafi – rapidly and simultaneously - is also worth considering. Of course, the eccentric Libyan leader, who has been conducting anti-American policy for 40 years, never was the favorite of the West, but they tolerated and accepted him – the colonel has never been an “outlaw” for the “civilized society”, unlike the North Korean leader Kim Jong Il, and unlike North Korea Libya has never been attributed to a so-called “axis of evil”.

Moreover, eight years ago Gaddafi abandoned the idea of possessing nuclear weapons in order to become closer to the Western world and let the Western monitors enter his country. He also settled all the issues linked with the payment of compensation to the families of the victims of the air crash of which Tripoli was accused. Indeed, the international sanctions against Libya were removed and all claims to the country were withdrawn.  But the Western world considered that a more acceptable alternative to Gaddafi’s regime could be found and did not hesitate to start an operation on the overthrowing of his regime. This has led to what we are observing there now.

It is difficult to say what West has won in a short-term perspective when it abandoned all written and unwritten agreements with Tripoli at the same time and provided support to the opponents of the Libyan leader.  It is more important that strategically it was the defeat for Western democracies from the very start.

First of all they have let the world see that, the principle of the national sovereignty is becoming an illusion, and the security of any state, which is part of the UN system and which observes all the norms and principles of the international law, won’t always be ensured by political means. The Libyan colonel made a big mistake when he decided to make concessions to his external opponents in order to obtain a ‘protection document” from them.

What is crucial now is not even Gaddafi himself, but the influence he may have on many other countries, which now find themselves totally unprotected. In fact, by their actions against Libya the Western democracies have discredited the statement they had been promoting over the last decades that the abandonment of nuclear weapons by any “threshold state” would strengthen the security in the world. Like it or not, now every country faces the choice: either to accept the loss of real sovereignty, or to look for asymmetrical responses to global challenges, including an option to create its own nuclear arsenal.

By the way, Libya’s longtime friend – North Korea – has come up with clear decision out of this situation. According to the statement made by an official of the North Korean Foreign Ministry, “the Libyan crisis has once again proved the historical truth that amid the abuse of power and double standards, which make the global politics, peace can be kept only if every country strengthens its national might. The recent events in Libya teach the global community a serious lesson”.

Now the whole world clearly sees the fact that the “Libyan variant of refusal from nuclear program” the US used to promote as an example is nothing else but a method of military “merger” right after the disarmament of the opposite country by deceiving it with sweet promises of “guaranteed security” and “normalization of relations”.

Once again the established truth has been proved that until dictatorship and abuse of power exist in the world it is possible to protect peace only by means of its own force.

“Our choice for stronger army is absolutely right and the established self-protection model of North Korea serves as a deterrent, which prevents war and keeps peace and stability on the Korean peninsula”.[1]

Indeed, Pyongyang has much more external threats to worry about than Libya. In the report of the US State Department on the situation with human rights in the world North Korea is presented as “absolute dictatorship”, which “rejects the right of its nation to change its government”. Washington sees Pyongyang’s nuclear programs as well as the export of the relevant technologies first of all to the countries of the Mideast as a serious threat to its interest in North Eastern Asia.  Besides that, North Koreans are suspected in forgery of US currency, participation in drug trafficking and many other sins.  Though, unlike Iran and Libya, North Korea does not have the resources which may pose interest for the “free world” it also means a lot because it is located in strategically important area of Asia. The unpredictability of North Korea, which plays by its own and not American rules in the region, creates a factor of military political uncertainty and this makes the implementation of Washington’s strategic tasks more complicated.

Even a small part of the above mentioned factors would have been enough for the decision on the overthrowing of the regime of Kim Jong Il if it had not been for one “but”: North Koreans have already obtained nuclear weapons at least nuclear explosive devices, which was proved by the relevant nuclear tests conducted in 2006 and 2009. For the US the biggest miscalculation was that it missed the moment when it could prevent this situation and now Americans have to deal with the state, which is really dangerous and which will fight to the end if any country attacks it.

A possible use of military force against Pyongyang was seriously considered in the early days of George Bush Jr. presidency but after proper consideration of all “pros” and “cons” this method was rejected.  In particular, the Americans calculated that even in case of blitzkrieg attacks by precision-guided weapons Pyongyang would have options to respond and to cause unacceptable damage to the opposite party.  Of course, the US would not be damaged because North Korea does not have the carrier missiles capable of bringing warheads on the territory of the US, but Pyongyang is keeping a bead on South Korea, which is Washington’s ally. In particular, North Korea has up to 8,000 units of long range artillery and several hundred missiles launchers along the 270-km stretch, which neighbors the demilitarized zone on the border with South Korea including the area right near the South Korean capital. According to North Korean generals and international experts, this arsenal is enough to turn Seoul into the sea of fire in several minutes.

Unlike Gaddafi, Kim Jong Il realized right after the events in Yugoslavia and in Iraq that he would not get any guarantees for protection against possible aggression from outside and no country, even China, would fight for Pyongyang and his country should rely only on its own military potential. The more unacceptable in the eyes of the “civilized world” this form of protection will be the more reliable it is for the security of the country.

The North Korean leader used to say “nuclear weapon let us to sleep quietly”. The nuclear tests conducted in 2006 and 2009, as well as the demonstration of the uranium enrichment facilities to American experts last year showed that North Korea has the potential but how huge this potential is still unknown.

In other words, Кim Jong Il, who did not trust anybody in recent years, has made proper preparations for force majeure circumstances and has secured his country against any threats while Gaddafi has overlooked these risks and lost. One can have different attitude towards Kim Jong Il and his regime but when he was backed into the corner he played it all or nothing and reached his goal, ignoring the indignation of the “global community” over Pyongyang’s nuclear potential. Now Americans and their allies can express their indignation over the outrageous moves of North Korea as long as they like but they are not able to take any real steps – they have to deal with the country, which is de-facto a nuclear power.