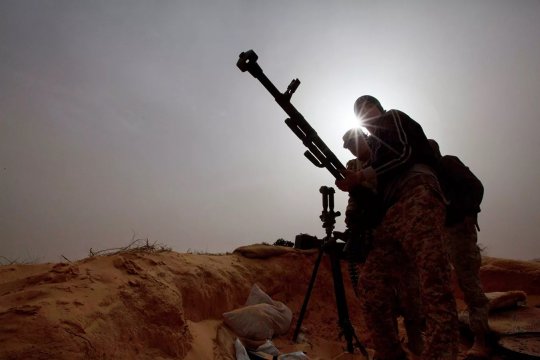 Domestic and external actors never tire of calling for a ceasefire in Libya, but the situation continues to escalate nonetheless, both in and outside the war-torn North African country.

Turkey’s military activity in Libya is already having a knock-on effect with Egypt now threatening to enter the war. Small wonder, because the Egyptian President Abdul Fattah al-Sisi came to power by ousting the regime of the Muslim Brotherhood (now banned in the Russian Federation), which the Libyan Government of National Accord (GNA) is chummy with. Since the «Brothers" currently play a prominent role in Morocco, Tunisia and Algeria, Cairo would hate to see them gaining strength also in neighboring Libya. Here Egypt enjoys the support of the monarchs in Riyadh and Abu Dhabi who are wary of the Muslim Brotherhood’s support for the idea whereby people are free to elect their political leaders.

After proclaiming his internationally-backed “Cairo initiative” to resolve the Libyan conflict, al-Sisi followed this up with a stern warning: “Any direct intervention from the Egyptian State in the Libyan crisis is now having international legitimacy… restoring security and stability in Libya is part and parcel of Egyptian security and stability...Sirte and al-Jufra (a major air base – A.I.) are the “red line” that we will not allow to cross.” [i]

According to the Abu Dhabi-based Al-Arabiya television channel, the Egyptian government is consulting with representatives of EU countries on measures to prevent the GNA forces’ seizure of Sirte. And Ankara has allegedly been “advised” to refrain from any military action in Libya’s oil-bearing regions. The Speaker of the House of Representatives (the parliament in Tobruk) Aguila Saleh has confirmed that the authorities of eastern Libya have asked Egypt for military assistance in the “war on terrorism and in countering foreign invasion.”

Presently, Libya is the place where the interests of at least four NATO members - Turkey, France, Italy and Greece intertwine.

Ankara openly supports the GNA and makes future peace negotiations in Libya conditional on the seizure of Sirte and al-Jufra. However, while rejecting the “Cairo initiative” and refusing to recognize the legitimate status of the Libyan National Army (LNA) commander Khalifa Haftar, Turkey simultaneously makes clear its readiness to communicate with Aguila Saleh.

Turkish delegations are frequent guests in Tripoli, just as the head of the Government of National Accord, Fayez Sarraj, is in Ankara. By providing across-the-board assistance to the authorities in Tripoli, Turkey expects to set up its military bases in Libya, secure a share of the production and sale of Libyan oil, and make sure that Turkish construction firms are invited to assist in Libya’s post-war restoration. And again, Ankara and Tripoli share a great deal of ideological affinity for the political and religious beliefs of the Muslim Brotherhood.

Italy also supports the GNA, though not as zealously as Turkey, with Rome already cooperating with Tripoli in the oil and gas sector and counting on its assistance in curbing illegal emigration to its territory.

France, meanwhile, is staking on Khalifa Haftar, who it believes is someone capable of stabilizing the situation in the country, which borders Chad and Niger, both of which are part of Paris’ zone of interests in Africa.

As for Greece, it feels uneasy about the agreements between Ankara and Tripoli, none of which recognize Athens’ right to the continental shelf between Rhodes and Crete.

In the meantime, contradictions between NATO Allies begin to "materialize": on June 10, a Turkish navy frigate used its fire control radars to "illuminate” a French warship that was to inspect, as part of NATO’s Operation Sea Guardian, the cargo on board a Turkish ship headed for Libya’s Misrata. France slammed the accident as "extremely aggressive" and demanded that the matter be investigated under the NATO format. The Turkish news agency Anadolu then reported, citing the Turkish naval command, that the frigate had not used its radars to target the French ship, but was only monitoring its “dangerous maneuvers.”

In response, the French President Emmanuel Macron stated that the incident confirmed his earlier view about the “brain-dead” North Atlantic Alliance, and his Foreign Minister Jean-Yves Le Drian said that the EU needed to discuss the prospects of its relationship with Turkey as soon as possible.

Turkey has long been an internal irritant within NATO. Late last year, Ankara blocked a NATO defense plan for Poland and the Baltic countries unless Brussels adopted a similar plan to defend Turkey against the terrorist threat from the Kurdish “People’s Self-Defense Units” in Syria. In fact, this would be tantamount to the organization that acted as the Western coalition’s ally in the war against Islamic radicals being branded as a terrorist one. They eventually reached a compromise, but Reuters recently reported about the French defense ministry complaining about Turkey’s opportunistic position: “While Ankara has approved the plan, known as Eagle Defender, it has not allowed NATO military chiefs to put it into action.” [ii] The NATO headquarters declined to comment on this information.

During a joint videoconference of NATO countries’ foreign ministers in April, the Turkish and Greek top diplomats bickered over the issue of migrants. When denied by NATO Secretary General Jens Stoltenberg a chance to make yet another statement, the Turkish foreign minister simply “signed off.”

However, looking at the situation from the standpoint of Ankara it would seem that recently it has had ample reasons for resentment.

In 2016, in the wake of the botched military coup, many Turkish military officers, fearing reprisals, requested asylum, of all places, in Turkey’s fellow NATO countries. A year later, during NATO exercises in Norway, someone posted the photographs of Ataturk and Erdogan on the stand listing the “accomplices of NATO’s enemies." The trickster was eventually found and fired, but the Turkish president even refused to accept an apology from his allies.

Finally, after a Syrian airstrike in Idlib left dozens of Turkish servicemen dead earlier this year, Erdogan convened an emergency NATO summit. All he got from his allies, though, was just an expression of moral support.   Luxembourg’s Foreign Minister Jean Asselborn said that because Turkey had not coordinated its military operation in Idlib with NATO, the pertinent article in the NATO Charter on collective defense against an outside aggression was not applicable in this case. Exactly the same thing happed five years ago when a Russian warplane was shot down by a Turkish missile and Ankara requested NATO assistance in the event of a possible conflict with Moscow.

Therefore, the results of a February poll by the Pew Research Center, which showed that only one in five Turkish citizens were satisfied with NATO’s policies (compared with the 53-percent average in 16 member-countries) look fairly logical. As for the Turks, more than 55 percent of them showed the thumbs down to Brussels. [iii]

In recent years, Turkey has pursued an increasingly independent policy, which is more and more at variance with the interests of some of its NATO allies, and refuses to put the bloc’s interests ahead of its own.  Moreover, Ankara primarily uses its membership in the Alliance to increase its political clout in relations with third countries. Bruno Tertre, deputy director of the Strategic Research Fund, hit the nail right on the head when he told the Paris-based weekly business magazine Challenges that “the Alliance must be based on shared values and interests. However, in the case of Turkey, Erdogan, we do not share either one.” [iv]

This reality is only highlighted by the conflict in Libya.

However, Turkey’s "intra-bloc destructiveness" is a far cry from what is being done by the administration of the current US president. Donald Trump, who regularly complains about America’s European allies spending too little on defense, has even threatened to pull the United States out of NATO. Dissatisfaction with German "stinginess" was one of the reasons behind Trump’s decision to move part of the US military from Germany to Poland. Angela Merkel aptly commented to this by saying that the European countries should wake up to a new reality where the United States will no longer strive for the role of world leader. Yuri Wendik from the BBC’s Russian Service even complained that Trump views NATO as just a "commercial joint venture."

Meanwhile, it looks like relations between the two "rabble-rousers" start warming up again: the FBI has opened a preliminary probe of Fethullah Gulen, a Muslim preacher, who currently lives in Pennsylvania, hiding from the Turkish authorities; Trump keeps delaying the introduction of long-promised sanctions for Ankara’s purchase of Russian S-400 air defense systems. Erdogan, for his part, has all but stopped mentioning Washington’s support for Kurdish forces in Syria; Ankara and Washington seem to have clinched some agreement on Libya. Overall, the Turkish-American agenda is less and less correlated with NATO’s.

Make no mistake, NATO is still far from being a "lame duck," but it still seems that the process is already gaining traction, and that the Libyan test can spur it on.

Last November, George Friedman, the founder and chairman of Stratfor, a private company that publishes geopolitical analyses and forecasting of international affairs, wrote that the biggest problem today, is America inability to be constantly at war as it has been fighting in Afghanistan and Iraq for 18 years now. He adds that the US no longer wants to be in the region and expects countries like Turkey to take responsibility for the region.”  [v]

Ankara apparently agrees and Washington would hate to disappoint its Turkish partners.