Libyan reconciliation: via Moscow on to Berlin 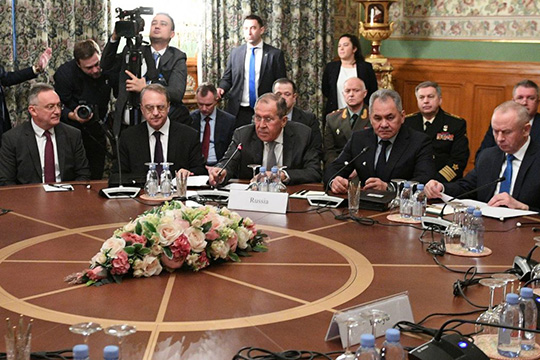 During the January 8 talks in Istanbul, Turkey and Russia, acting as “mediators,” called on all parties in Libya to "cease hostilities from midnight on Sunday, January 12, 2020, declare a sustainable ceasefire, supported by necessary measures to be taken for stabilizing the situation on the ground and normalizing daily life in Tripoli and other cities, to immediately sit down at the negotiating table in order to put an end to the suffering of the Libyans and return peace and prosperity to the country." [i] The leaders of the warring parties - the Prime Minister of the Tripoli-based Government of National Accord (GNA) Fayez Sarraj and Field Marshal Khalifa Haftar, the commander of the eastern-based Libyan National Army (LNA) - were invited to Moscow for talks.

While the GNA, hard-pressed by the situation at the front, was quick to accept the Russian-Turkish proposal, Haftar, whose forces are advancing on the capital, took his time.

"We welcome [Russian President Vladimir] Putin's call for a ceasefire. However, our fight against terrorist organizations that seized Tripoli and received support of some countries will continue until the end," Haftar’s spokesman said. [ii]

However, Haftar was eventually persuaded by Russia to attend the Moscow parley.

The negotiations between the rival Libyan leaders, preceded by consultations by Russian and Turkish foreign and defense ministers, were conducted through intermediaries. Sarraj refused to meet in person with Haftar, saying that the LNA continued its advance, but still agreed to a ceasefire deal proposed by Moscow and Ankara. Khalifa Haftar first said he needed time to think it over, and then left Moscow altogether, explaining to the Russian military representatives that he was taking a time out to consult with his allies. According to media reports, he was not content with the absence in the text of the agreement primarily of clauses concerning the dissolution of GNA units, the withdrawal of Turkish troops from Libya and the annulment of memorandums signed by Tripoli and Ankara. Buoyed by their gains on the battlefield, the LNA leaders apparently prefer to talk with their opponents from a position of strength.

It was apparently with this understanding in mind that, immediately after their commander’s departure from Moscow, the LNA representatives said they were all set to achieve "the complete liberation of the capital from terrorists." According to media reports, shortly after that, hostilities resumed south of Tripoli.

Meanwhile, the GNA’s ally, Turkish President Recep Tayyip Erdogan, threatened to “teach” Haftar “a lesson” if he did not stop his military advance on Tripoli. As to his ally, Sarraj, on his way back from Moscow, he made a stopover in Turkey, where he met with the US ambassador to Turkey, David Satterfield, at a hotel in Istanbul to discuss “issues of mutual interest.”

Well, the foreign policy context of the Libyan crisis is by no means less complicated than Syria’s. Sarraj is backed by Turkey and Qatar, and has Muslim Brotherhood units fighting on its side, while Haftar’s Libyan National Army faction is supported by Egypt, the United Arab Emirates and Saudi Arabia. Europe is trying to reconcile the warring parties, and Italy, France, and more recently Germany, have equally been active in this effort. The United States is “waking up” too.

While Syria is of little interest to most Western nations, Libya happens to be a sort of Europe’s underbelly the main flow of African refugees goes through. Besides, Libya’s hydrocarbon reserves are incomparable with Syria’s. Notably, just as Russian and Turkish officials were meeting in Istanbul, Sarraj was in Brussels meeting with EU representatives, and Haftar was on a visit to Rome.

Moscow has always kept an equal distance from both Tripoli and Tobruk (the seat of the House of Representatives and the interim government of Libya, supporting LNA), emphasizing its contacts with both sides of the conflict.

Now, Turkey and Russia have apparently decided to implement the successful Astana format, as some experts believe that the role once played by Iran could be assigned to Algeria both Moscow and Ankara are on good terms with now. During his inauguration ceremony last year, Algeria’s new president, Abdelmadjid Tebboune, prioritized the development of closer ties with Libya. [iii]

This won’t be easy though, just as the rival Libyan leaders demonstrated to a full extent in Moscow. Still, after many hours of negotiations, the Russian and Turkish foreign ministers spoke about having achieved “certain progress.” As a result of the two countries’ diplomatic effort, the irreconcilable (at least for now) Libyan enemies eventually arrived in Moscow - the last time Sarraj and Haftar met was a year ago, even before the LNA launched its “decisive attack” on Tripoli (April 2019). Moreover, “the main result of the meeting was the achievement of agreement in principle between the conflicting sides to maintain and indefinitely continue the cessation of hostilities, which creates a more favorable atmosphere for the Berlin Conference on Libya,” the Russian Defense Ministry said in a statement. [iv]

Russia wants much more than just to replicate Syrian developments, even the most successful ones. Moscow wants to get Europeans and regional actors working together to end the bloodshed in Libya.

“We want to combine the efforts being made by Europeans, including Germans, French and Italians, and by Libyan neighbors - Algeria, Egypt, and also the UAE, Turkey, Qatar, and the Russian Federation, to make sure that everyone works together to encourage all the Libyan parties to come to an agreement,” [v] Russia’s acting Foreign Minister Sergey Lavrov said ahead of the Berlin Conference on Libya, scheduled for January 19.

Germany hopes to bring Fayez Sarraj, Khalifa Haftar, representatives of Russia, the US, China, Britain, Italy, France, Turkey, Egypt, Algeria, the United Arab Emirates, the African Union, the EU, the United Nations and the League of Arab States to the negotiating table to discuss and, quoting German Foreign Minister Heiko Maas, “possibly adopt” a document that will lead to a sustainable cessation of hostilities and start the political process under the auspices of the United Nations.

Skeptical as many experts are about the outcome of the Berlin meeting, it still seems that chances of success look very real. On the one hand, the position of Fayez Sarraj, who earlier said he was ready to agree, remains precarious. On the other hand, the highly representative lineup of participants in the Berlin forum may well convince Haftar (or his representatives, if the Field Marshal does not show up) to more realistically assess his capabilities. Therefore, the LNA’s activities following the Moscow talks could just be an attempt to strengthen its negotiating position ahead of the Berlin Conference.