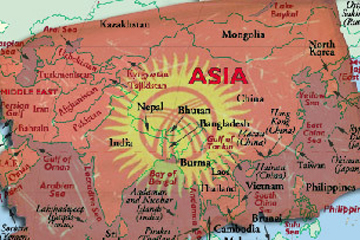 Russian general staff chief Gen. N. Makarov warned at a media briefing in Moscow on September 12 that revolutions patterned on the Libyan one can recur in Central Asia.

Overall, the pertinent scenario includes the incitement of public unrest, civilian fatalities, international condemnations of repressions against protesters, the passing of a UN resolution partially authorizing the use of force against the regime with the goal of protecting the civilian population, and a massive military intervention boldly overstepping the limits set by the UN resolution. Covert operations launched by NATO special forces disguised as a local militia and a media campaign with shows of imitated atrocities allegedly committed by the regime which therefore should deserve being displaced were also named as elements of the hypothetic plan.

In addition to media hyperactivity, the difference between the color revolutions that shook Serbia, Georgia, and Ukraine in the past decade and the potential Libya-style coups is that the latter would culminate in military interventions against the targeted regimes and the UN would take an important role in the process. The implementation of the design in Libya was facilitated by the archaic tribal structure of the country's society such that the intervening powers were able to entrain some of the tribes in offensives against others.

Even a sketchy analysis shows that Central Asia is a region vulnerable to revolts based on the Libyan scenario. Kinship and tribalism are endemic in Central Asian elites. The dominant groups are the Great jüz in Kazakhstan, the Teke in Turkmenistan, the Tashkent-Samarkand clan in Uzbekistan, and the Kulob clan in Tajikistan. Minor inclusions of other groups – as the Little jüz in Kazakhstan - do maintain a presence in the local elites, but they have minimal impact on overall situations in the republics. Escalations occur in Central Asian republics whenever alternative clans attempt to win stronger positions in the administrations, and the accompanying unrest can easily be used as pretexts for foreign interventions ostensibly meant to ensure the security of civilian populations.

Kyrgyzstan provides a vivid example of potential consequences of conflicts between clans and dominant regional groups in Central Asia. Since the collapse of the USSR, leadership was seized fist by the northern clan led by Askar Akayev in 1991-2005, then by the southern one headed by Kurmanbek Bakiyev (2005-2010). The fall of Bakiyev's regime in 2010 opened a period of lingering political and economic instability in the republic. At the moment the Kyrgyz administration is mostly in the hands of the northerners including president Roza Otunbayeva and premier Almazbek Atambayev, and the administration's grip on southern regions of Kyrgyzsatan which were severely hurt during the June, 2010 clashes remains week. It is fair to say that over the past year Kyrgyzstan started to face the threat of disintegration and statehood decline. No doubt, the crumbling of Kyrgyzstan would trigger a chain reaction across Central Asia.

Another circumstance inviting the analogy with Libya is the existence in Central Asia of radical Islamist groups ready for wage wars against the current regimes or to launch terrorist attacks. In Libya, Al Qaeda militants formerly trained in Afghanistan and Iraq contributed vastly to the breaking of the Gadhafi regime. In this regard, Central Asia with its porous borders and geographic proximity to Afghanistan may prove defenseless even to a greater extent than Libya. The region's top-powerful Islamist group is the Islamic Movement of Uzbekistan, but occasionally other groups with loud names like the Islamic Jihad Union which claimed responsibility for the 2009 terrorist attacks in Uzbekistan move to the front stage. In 2011, Central Asia was confronted with a new phenomenon – an extensive terrorist network was discovered in the seemingly peaceful western part of Kazakhstan.

Similarly to Libya where mostly Western companies gained control over Libya's oil in the wake of the anti-Gadhafi revolt, Central Asia sits on impressive energy reserves. Oil and gas deposits are located in Kazakhstan, Uzbekistan, and Turkmenistan, all of which happen to be in Central Asia's risk zone. It should be noted as well that Kazakhstan owns some of the world's biggest deposits of uranium and Kyrgyzstan – considerable precious metal deposits.

It factors into the situation that geographically Central Asia is isolated from the West and can be accessed only via Russia, China, or Afghanistan and Pakistan. The relations of the latter two with the US soured recently. Moscow and Beijing would surely shut down access to Central Asian republics if their own interest are put in jeopardy. An alternative route traverses Georgia, Azerbaijan, and the Caspian Sea which are also crossed by the TRACECA transit corridor (Europe - the Caucasus - Asia). The US already has strong positions in Georgia but would have to secure a foothold in Azerbaijan, a republic so far staying outside of the US sphere of influence, to fully use the corridor to their own ends.

Lack of direct access to Central Asia from the traditional NATO responsibility zone would put serious obstacles in the way of an intervention comparable to the one recently launched against Libya. At the moment the transit routes used to supply NATO bases in Afghanistan and Kyrgyzstan are entirely dependent on Russia, Kazakhstan, and Uzbekistan. Still, the immediate military roles in the case of an intervention in Central Asia can be taken by Islamist groups, especially since the  control on the border with Afghanistan is nonexistent. Under the plan, US military bases can serve as coordination and supply centers. In August, 2008, an arsenal of firearms was found in Bishkek in a private residence rented out to the US, and it is hitherto unclear what the purpose of amassing the weapons could have been.

The possibility of the materialization of the Libyan scenario in Central Asia already came under scrutiny in the region's republics. On September 15, Kazakh Respublika outlet published a paper by R. Rysmambetov titled “The Libyan Scenario for Kazakhstan: Myth or Reality?” listing such risk factors as the availability of the region's lucrative natural resources, deeply entrenched tribalism, activities of radical Islamic groups, and the openness to external control of the local administrations whose senior officials own accounts in Western banks and have children studying in Western universities. Notably, Rysmambetov projects that Russia or China would not enter the game if outbreaks of unrest take place in Central Asian republics.