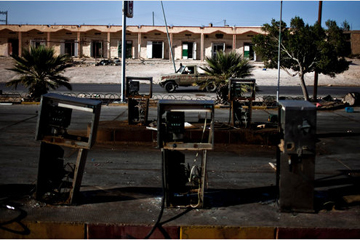 According to a recent New York Times article, Human Rights Watch released materials citing cases of gross abuse by anti-Gadhafi rebels in a mountainous area located in the western part of Libya. Incidents are reported to have taken place in the towns of Qawalish, Awaniya, Rayaniyah and Zawiyat al-Bagul seized over the past month by the rebels from the government forces. In what appeared to be a series of reprisals against Gadhafi backers,  the population of the towns was chased away from the places and the locals' property was extensively damaged. Two currently deserted medical centers and scores of local businesses were looted by the rebels. HRW also said rebels were beating suspected Gadhafi loyalists and torching their homes, while much of the abuse being directed against members of the Mashaashia tribe who are known to be traditional supporters of the Libyan government.

The information supplied by HRW resonated with the audiences in the US and Europe, where the legitimacy and fairness of the military campaign which grew out of a fuzzy UN mandate and was launched to prop up the cause of Libya's “freedom fighters” are being increasingly called into question. At the moment, it seems clear from the rebels' conduct that a tide of retaliatory violence would sweep across Libya if the anti-Gadhafi forces prevail.

In the meantime, rebel officials are making awkward attempts to downplay the recent looting and arson in the western part of Libya. The region's senior rebel commander Col. Mukhtar Farnana said in a follow-up interview that “the reprisals were not sanctioned” and even denied knowing any details of the incidents, but was at the point caught lying by HRW as, according to the watchdog, he was the individual who originally shared with the investigators specific information about the abuses and, moreover, conceded that those came as a “punishment” for collaboration with Gadhafi's regime. HRW quoted the field commander as saying: “People who stayed in the towns were working with the army. Houses that were robbed and broken into were ones that the army had used, including for ammunition storage. Those people who were beaten were working for Qaddafi’s brigades”.

Rebel conduct under the conditions of unfolding armed conflict predictably tends to be mixed. Some of the captured soldiers and officers from the government forces are being detained under decent conditions, given medical treatment in hospitals, and even allowed to see their relatives, while there is reliable evidence that others were beaten at the point of capture or shot on site. Several prisoners in Misurata were shot through the feet as a means to prevent escape. On many occasions, journalists also witnessed rebels fire indiscriminately on towns held by the government forces, with makeshift rockets hitting obviously civilian targets. Gadhafi's army faces similar accusations, but the flight of civilians from regions falling to them never reached the same proportions as that triggered by rebel advances.

A shocking instance where a crime had been committed by the rebels surfaced hours before HRW rolled out its sensational findings. In the zone between the Um al-Jersan and Qawalish villages, five bodies decomposed beyond recognition were unearthed from a deep concrete basin linked to the region's water pipeline, with cloth bindings scattered around, which provides evidence that the people had had their arms and legs bound. Judging by remnants of military uniforms, the dead had been the government army's servicemen. Pistol and rifle cartridges were also littered on site. Local residents pointed to heaps of rock and freshly turned dirt where, as they said, other dead bodies were rotting.

Western comments drawn by the HRW report largely revolve around the argument that no party to a ferocious civilian conflict can be realistically expected to emerge from it with a spotless reputation. That in itself is true, but it has to be taken into account in the context that from the outset the NATO propaganda was selling Libyan rebels as knightly freedom fighters, and it transpires at the moment to what extent the picture is at odds with reality. The situation evokes similarities with Kosovo, where “freedom fighters” from the terrorist Kosovo Liberation Army, lauded by then-US Secretary of State M. Albright, mercilessly butchered defenseless people and even set up a network of trafficking forcibly extracted human organs. These days, Libyan rebels are treated as heroes by N. Sarkozy and NATO top brass, and there are no signs that the hypocrisy and bias will ever wane.

Awakening even fleetingly the West's hopelessly rigid public opinion takes a bombshell. Who knows, perhaps Serbia's history could have taken a different turn if news had popped up at the peak of the Yugoslavian conflict that Kosovo Liberation Army guerrillas had carved up a European citizen and the extracted organs had been used for human repair in Italy's clinics. It would be unethical to hope that, maybe, some British volunteer mistakenly falls victim to a reprisal by the Libyan rebels, but, absent even a minimal amount of common sense in big politics, this is going to be an imminent finale.