London scandal over Ukraine: “The Times” vs “Amnesty International” 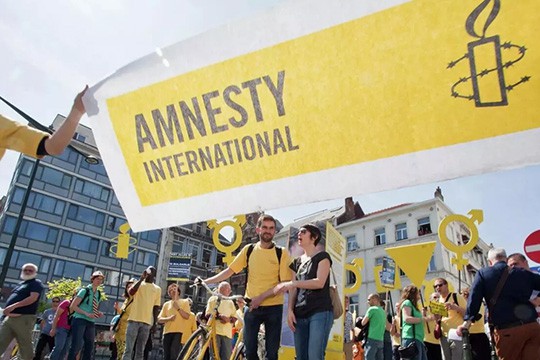 Ukraine is so toxic that it could cause a scandal in London between two serious structures. First Amnesty International accused Ukraine of endangering civilian lives and says it 'calls out human rights violations no matter who is responsible, writes “Daily Mail” in London. Amnesty report listed incidents in which, it said, Ukrainian forces appeared to have put civilians in harm's way by establishing bases in residential areas. It even went as far to call on Ukraine to move forces way from populated areas. Ukraine's Amnesty team said their concerns over the report were ignored. And this caused a backlash from “The Times”.

“Daily Mail” reports: Amnesty International defended its report accusing Ukraine of endangering the lives of its own civilians in the country's defence against Russia, saying it 'calls out human rights violations no matter who is responsible'.

Amnesty listed incidents in 19 cities and towns in which it claimed Ukrainian forces appeared to have put civilians in harm's way by establishing bases in residential areas.

In response to widespread criticism, Amnesty said it fully stood by its accusations. In a statement given to MailOnline, an amnesty spokesman said 'we will never ignore human rights violations'.

And later the organisation's Secretary General Agnes Callamard told AFP news agency that Amnesty 'fully stands by our research'. 'The findings... were based on evidence gathered during extensive investigations which were subject to the same rigorous standards and due diligence processes as all of Amnesty International's work,' she added.

After a four-month investigation, Amnesty said it had found that the Ukrainian military had established bases in schools and hospitals, and launched attacks from populated areas, asserting that the tactics violated international humanitarian law. 'We have documented a pattern of Ukrainian forces putting civilians at risk and violating the laws of war when they operate in populated areas,' said Agnès Callamard, Amnesty International's Secretary General in the report.

At the end of the report, Callamard – a French human rights lawyer – also called on Ukraine to move 'its forces away from populated areas, or should evacuate civilians from areas where the military is operating. 'Militaries should never use hospitals to engage in warfare, and should only use schools or civilian homes as a last resort when there are no viable alternatives.'

The publication caused wild irritation among the authorities in the UK. Official newspaper “The Times” published an article “The Times view on Amnesty International Ukraine report” in which the say: “The Times said the team convened to cover the cases of prisoners of conscience "this week determinedly set about shredding its credibility by serving as a megaphone for the propaganda of the Putin regime." After spending a couple of weeks in the occupied Kharkiv, Mykolaiv and Donetsk regions, and without consulting the Ukrainian office, Amnesty International wrote in writing to accuse Ukraine of "violating international humanitarian law and endangering civilians by turning civilian objects into military targets."

"Amnesty’s report pays no attention to the realities of military operations and misunderstands the content of positive international law," - writes “The Times”.

"Members of the public who generously donate money and time to it in the belief that they are aiding victims of persecution should stop. A once-respected humanitarian campaign, Amnesty now evinces a deplorable indifference to oppression. Having shown itself soft on crime and soft on fascism, it should have the decency to depart the stage," concludes “The Times”.

…What a great scandal in London! The British are so strongly opposed to Russia and in favor of the Kyiv nazi regime that even the objective data from а Western structure cause anger and hatred. The truth hurts the eyes…