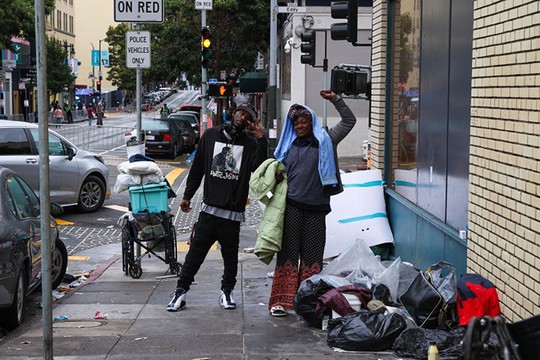 Shop owners threaten to stop paying taxes unless city tackles crime. Business owners in San Francisco's Castro district have absolutely had it with the city's inaction over burglaries, vandalism, and violent homeless people camping on the sidewalks in front of storefronts and residences, writes "American Thinker”.

San Francisco has an established reputation as a capital for fringe culture and leftism, much of which converges in the enclave of Castro. Now, under Democrat leadership, the iconically left community is ready to take drastic measures toward radical American patriotism. Three days ago, the San Francisco Chronicle reported:

“For years, business owners in San Francisco's Castro district have complained to city officials that homeless people struggling with mental illness and drug addiction have wreaked havoc on the neighborhood. Now, merchants say the situation has gotten so bad that they're threatening to possibly stop paying city taxes and fees.”

The threat arises from a letter drafted and sent to city officials by the Castro Merchants Association on August 8. According to co-president Dave Karraker, if the calls are neglected, the response will be civil disobedience, including refusal to pay taxes.

Karraker said: “If the city can't provide the basic services for them businesses to become a successful business, then what are we paying for? You can't have a vibrant, successful business corridor when you have people passed out high on drugs, littering your sidewalk.”

Needless to say, it's likely the irony is lost upon the residents and proprietors of Castro, stresses "American Thinker”. The very spirit they oppose in policy — revolutionary freedom from the yoke of taxation and anti-tyrannical government — is the very spirit they're on the verge of embracing.

The government exists for one purpose, and that is to secure unalienable rights. One of those rights is property ownership, and between 2019 and 2020, storeowners saw a distinct rise in "burglaries and vandalism", and in Castro, "the merchants association recorded more than 90 incidents totaling over $170,000 in repair costs since 2020."

When the government fails to safeguard our rights, it forfeits its legitimacy and authority to govern, people there say. After more than two years in which problems of vagrancy, vandalism, and petty crime have gotten only worse, Castro merchants say they're going to withhold taxes from the City of San Francisco if it doesn't address their concerns.

Karraker added: "Until we see demonstrable change, everything is on the table, including civil disobedience."

And as Silvio Canto Jr. writes: “I spoke with a friend who went to San Francisco, and he couldn't believe the general decay of a once wonderful city... So it's great to see that business owners are drawing the line. Put the issue in the laps of the elected officials, and use your taxes as a weapon. After all, you are paying for the police, and it's the political class tying their hands.”