Macedonia and Albania not allowed even in EU "waiting room" 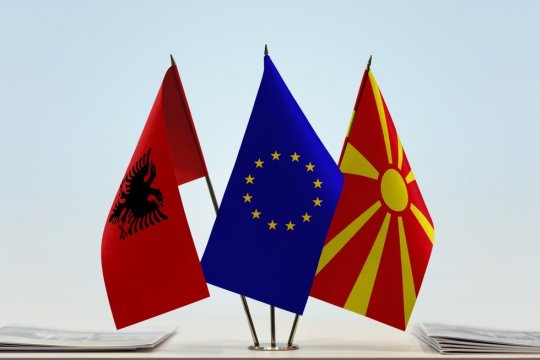 The recent decision by an EU summit to postpone until October the solution on welcoming in Albania and Northern Macedonia as new members marks yet another setback for the European Union, which testifies to lack of unity among its members. Both Albania and Northern Macedonia have done all they could in the past few years to prove their loyalty to NATO and the West with a view to secure early admission to the European Union. Albania has joined NATO and supports Kosovo separatists, while the former Yugoslav regional capital Skopje chose to change the name of its country from Macedonia to Northern Macedonia, despite the unconvincing results of the de facto failed referendum on this issue in February this year. All these efforts were not rewarded, not even by a formal annouccement on the start of the membership talks.

The matter is that European capitals make no secret of the reasons for such a postponement: the parliaments of Germany and the Netherlands opposed the entry of Macedonia, and Albania in particular. (1) These parliaments have thereby refused to implement the recommendations of the European Commission of May 29 which advised member states to speed up the process of welcoming new members into the Union from countries of Western Balkans.

Instead of information on the beginning of the negotiations, Macedonia and Albania received a humiliating communiqué of the European Council, calling on these  “hopefuls” of the EU memberfship to do more to secure the rule of law, strengthen democratic institutions, etc.

Macedonians and Albanians feel deceived also because the EU’s Commissioner for Enlargement, Johannes Khan, promised last year that membership negotiations would begin in June 2019 if both countries carried out reforms of their judiciaries and security services.

Albanian Prime Minister Edie Rama said that his country has fulfilled the reforms required by Brussels and that Tirana has thus earned the right to enter admission negotiations. (3)

The Prime Minister of Northern Macedonia, Zoran Zaev, went as far as stating that postponement of negotiations on his country's accession to the EU could lead to the fall of his government and the victory of nationalist forces “hostile to the European Union”.

Behind all these statements lies demonization of Russia and the attempts to present it as a “destabilizer” of the situation in the Balkans, just as it was done by  Montenegrin leader Milo Djukanovic, who accused Moscow and so-called “Serbian nationalists” of an attempt to stage a coup in his small country for the purpose of preventing Montenegro from entering NATO. (4)

The version of what happened was provided by a Montenegrin court, which blamed leaders of the opposition Democratic Front for an attempt to seize power in Podgorica with the help of two dozen Serbian militants. The court described the incident as a typical conspiracy and a "high-profile process" in the style of Andrei Vyshinsky. Nevertheless, the Western press has accepted this version, telling its to readers about plans by wicked Russians and Serbs to kill Mr. Djukanovic, who positioned himself as a Serbian-Montenegrin nationalist during the "Yugoslav Wars" of the early 1990s.

Will North Macedonian Prime Minister Zaev succeed in performing the same trick, will the EU accept his version that "forces hostile to the European Union" will take over if his country does not join the European Union in the near future? It seems that the European Union is skeptical about Zaev's “warnings”. It knows only too well that Zaev himself came to power as a result of a Macedonian “color revolution” that removed the former leader Nikolu Gruevsky, who led the left-wing party VMRO-DPNE. This party is still the largest opposition party in the parliament of Northern Macedonia.

Shortly after coming to power Zaev reoriented the country to NATO, hoisting a NATO flag in front of the Macedonian government building. (5) Taking advantage of people's hopes for joining the European Union, Zaev ensured the victory in the presidential election of his henchman Stevo Pendarovsky. But now that the prospect of starting negotiations looks remote and indefinite, Zaev and his entourage may indeed face a destabilization. The position of Albanian government of Edi Rama, who is facing powerful protests across the country, is hardly better.

(2) Communiqué of the European Council on the outcome of the ECB summit of June 18, 2020 https://www.consilium.europa.eu//media/39837/st10446-en19.pdf?utm_source=dsms-auto&utm_medium=email&utm_campaign=Coun+conclusions+on+enlargement+and+stabilization+and+association+process