Macron on European security: 'I don't want the Chinese and Turks to be the only ones negotiating the day after' 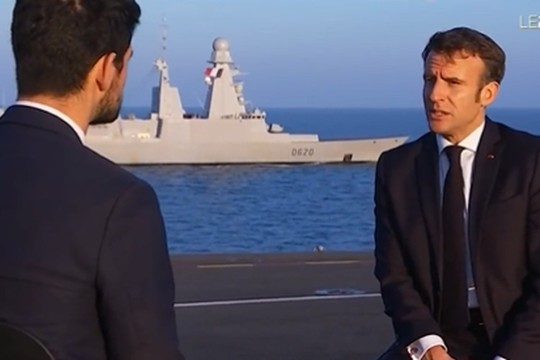 "Europe needs to protect itself. Europe must gain technological and capability autonomy from the United States and create a real European pillar within NATO as the Ukrainian conflict highlighted the ‘weakness of Europe’ and its ‘dependence on its US ally’. This is not an alternative project," said French President Macron (photo) in an interview published by “Le Monde”.

…Macron said in an attempt to settle a recent outcry which occurred after he spoke about "security guarantees" entitled to Russia in a negotiated solution. "This is not the priority. It is one of the things that will come at the end stage. The priority today is to defend Ukraine, which is what we have been doing since day one," Mr. Macron said.

For Mr. Macron, it is not time to discuss a possible reconquest of Crimea, annexed by Moscow in 2014. "The issue of Ukrainian sovereignty and its territorial integrity is a matter for the Ukrainians," he said, at a time when the question has become particularly sensitive between Kyiv and its allies.

But Mr. Macron was not giving up on promoting a lasting peace agreement with Russia. "I have always been clear in saying I did not think this conflict could end only militarily. I also understand the strategy of some who say the only solution would be the annihilation of one of the two parties," he said.

"I know this upsets many who are committed to the annihilation scenario. I'd like them to explain how they want to proceed. In the end, we will have to get everyone around the table. I would like the Europeans and Westerners, who are lecturing me, to tell me who they want to see at the table. I don't want the Chinese and the Turks to be the only ones negotiating the day after," Mr. Macron said.

The issue of security guarantees, for both Ukraine and Russia, remains a central one in the mind of the French president. It also risks further delaying Kyiv's integration into NATO, which Mr. Zelensky sought to revive after Moscow annexed the occupied territories at the end of September.

"Ukraine's entry into NATO would be seen by Russia as confrontational. You can't imagine it with Russia as it is," Mr. Macron said. "Whether or not Ukraine joins NATO – and this is not the most likely scenario – it will have to be given stronger security guarantees because it's been attacked by Russia," he said.