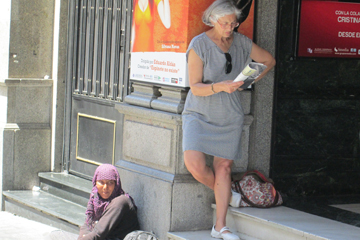 The Spanish capital, as well as all the rest of the Iberian country as a whole, is going through hard times. The recession there is still running the show, though, according to some, all the developed countries of Western Europe, including Spain, are gradually slowing the rate of economic decline or even starting to emerge from the crisis. Meanwhile the army of the unemployed in the Iberian kingdom still remains at a high level, accounting for nearly 4.7 million people. And the slogan "cut back, cut back some more!” continues to prevail in the Spanish government.

Recently the authorities have announced possible redundancies in the Madrid metro. They are expected to lay off 673 underground workers "voluntarily” in order to achieve economic optimization and also cut the remaining more than 6 thousand metro workers wages by 10 percent.

Recently, in order to save on public spending, the Spanish authorities planned to close about 200 missions abroad, and this will affect all the 17 autonomous regions. According to Madrid, this measure would allow the state to save more than 400 million Euros per year.

It was also proposed to include some staff from the autonomous regions in all the Spanish diplomatic missions and thus avoid duplication of duties, as their representatives are all engaged in cultural and educational work and the promotion of Spanish companies in foreign markets.

As is well known, immediately after coming to power, the Government of the People's Party introduced a tough package of priority measures to stabilize the economy and reduce the budget deficit. It began a process for raising taxes, based on the completion of additional replenishment to the treasury of 6.2 billion Euros. The reduction in overstaffed public institutions and the cost of their maintenance allowed for savings of almost 9 billion Euros. The government initiative to reduce diplomatic missions was not approved by all the autonomous regions. For example, Catalonia, which has the most representatives overseas, refused to reduce them.

The crisis has dealt a painful blow to the Spanish people, especially for those in higher education, in research and other creative professionals. The number of unemployed among them has increased by almost 4 –fold since 2007, now reaching 1.3 million people.

The recession in Spain has heavily impacted upon journalists. Just in the last few years, more than 6,000 people have been made redundant from agencies, newspapers, magazines, radio and television. In the past year, in 2012, because of financial difficulties in the Kingdom, the national newspapers " ADN " and " Public" were closed down, and a number of provincial publications, both paper and electronic, have ceased to exist . Major national publications such as "El País" have experienced great difficulties, and a number of newspapers, magazines and TV stations are still downsizing. Even the state news agency EFE has not been able to avoid making redundancies. Many journalists have seen their wages lowered and fees significantly curtailed. As acknowledged by Spanish experts, the crisis years have been truly black for the whole of Spanish journalism.

But are the media workers of the Iberian kingdom defenseless? Not at all! They are not giving up their professional positions without a fight. During these years of crisis, a wave of strikes and demonstrations by journalists has been seen across the country. Among the most active organizers and their advocates are: the Federation of Press Associations of Spain, the Madrid Press Association, and the printing unions.

While recently in the Spanish capital, I went to the Press Association of Madrid (APM), and I met its functionaries, who showed me their beautiful building, and introduced me to the structure and activities of the organization.

As I was told in an interview with a member of the Governing Board of the APM, David Corral Bravo, it includes about 8,000 people, or nearly half of all the associated journalists in Spain...

Senor Corral is a journalist with solid experience. He graduated from the Graduate School of Journalism, and also received education and a degree in political and economic sciences. His professional career began in 1970 on the newspaper "Diario El Ferrol ". Later he worked in the provincial press: on the edition of "La Verdad" in Murcia, then on the newspaper “Madrid ". David Corral has also worked outside of Spain – he was a correspondent for the EFE national agency in Algeria and Japan. Then he worked as the editor of the newspaper "El Diario -16," and as deputy editor of "Cinco Dias", then as the director and editor in chief of "GEO news ". In 2011, he was elected as a member of the Governing Council of the Press Association of Madrid.

“... The Madrid professional organization of journalists was formed on May 31st, 1895,” he told me in a conversation between us. “It is part of the country’s Press Federation. Today, several tens of thousands of our colleagues are working in Spain. Why so many? Not all journalists are associated, there are those who are not in the organization, and are connected to their parochial unions or other associations. What does our APM provide for its members ("asosyados")? First of all, the protection of their interests and freedom of the press, as well as confidence in the future. It has a full range of very important services. We in the APM offer training on a regular basis, and help journalists to adapt to new technologies. We provide medical care for "asosyados" and their families. We also have a publishing division, which publishes our magazines and books on journalism, publishes a specialized electronic journal called "journalistic notebook” ("Cuadernos periodísticos"), and we also publish APM yearbooks with the reflections of journalists on the situation of the media, their work and problems. The Association provides its "asosyados" with free qualified legal assistance. Work in APM and legal courses. We also have a good library. A separate structure provides employment services to those who have lost their jobs.”

“Spanish journalists in our country, as in many other countries around the world, find themselves today in a very dramatic situation. The financial and economic crisis has hit the profession hard, almost destroying the pre-existing business model of the organization of our media and spawning a host of new problems. All this has led to massive layoffs amongst our colleagues in all the autonomous regions of the country. But the crisis is only a part of the journalistic drama. Another powerful blow to our profession by a well-established model of paid media is the "Interactive boom”. Yes, the Internet has caused irreparable damage to the whole of our paper press. Our goal is just to soften the blows of the crisis and the Internet, to protect the dignity and the fundamental principles of our journalism, and what is written in our charter...”

According to David Corral, the APM is not trying to impede the financial relationship between journalists and their employers. This is a task for the media trade unions. However, the APM is working closely with them.

How much does membership in the association cost? Each "asosyado" pays a quarterly fee of 66 Euros, and for medical services - 15 Euros extra.

The Board of Directors consists of 23 members and operates on a voluntary basis, which means not receiving salaries. Only those functionaries who are under contract are paid, for example, doctors or librarians. The salary paid to our General Secretary, Maria Jesus Chao, who performs his duties on a daily basis, “is being discontinued.”

From the conversation with Senor Corral and some other “asosyados” I have concluded that, despite the dramatic situation in Spanish journalism, media workers in the Kingdom are critical but constructive in relation to their current situation. They have not lost the ability to reflect, analyze and predict its future. They still hope for a better future. My meeting with David Corral finished with these quite optimistic words: "Crises may come and go, but our profession continues.”

One can start to believe in the optimism of the Spaniards, having visited the School of Journalism, set up jointly by the Autonomous University of Madrid and the editorial board of the newspaper "El Pais". Since its founding in 1986, over a thousand journalists have been trained there. A new course opens in October, which runs until July 2015. The school is located within the premises of the newspaper itself, and learning takes place in parallel with practical work. In the final year students are given "practical work" in the media, which is owned by the “PRISMA” media group. However, despite the layoffs and the reduction of their salaries, young Spanish people continue to study journalism, or seek to improve their skills, so someone must need them. Hence, despite the crises, Spain continues to look to the future.