Managing the breakdown of order 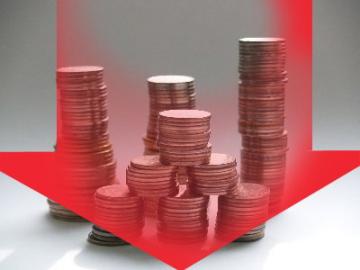 Have you ever heard of tempered glass? When you break it, it crumbles into small chunks. Or imagine a ball lying in a pit: it looks as if perfectly fixed inside the pit but once you touch it slightly, it runs down- nobody can predict where exactly. There is also another example from if you please: the phenomenon of compression and rarefaction in the strength of materials.

All the above mentioned examples can refer as well to the word 'catastrophe', which is understood as 'abrupt alterations occurring as a response to gradual change in the external world'. Let us leave out all complicated details about  this phenomenon and focus just on the role it plays in human evolution and the fact that a catastrophe always results from accumulated dysfunctions.

Now have a look at challenges faced by global society today. 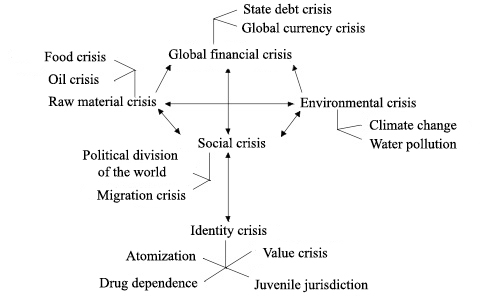 There has hardly been a time in the past, except the eve of WW I and WW II, when global economical, environmental and social crises would be so interrelated and so linked to psychological problems of humankind. And what is peculiar about it all is that most of these problems are created by people themselves. And Europe, the European civilization is on the crossroads of this.

The cornerstone of this scheme is the financial crisis, which started 3-4 years ago from the banking crisis and by today has grown into the state debt crisis (it affected not only Europe but the US as well) and global currency crisis (as a result of the weakening U.S. dollar). Although the initial- banking- stage of this process did not occur by itself, there is something different we should pay our attention to: a) mass media avoid reporting about the aggravating of the financial situation (except very few warnings) b) events taking place in social life as well as in the sphere of environmental protection and raw materials industry lead to even more grave economic consequences (see a phase diagram below). 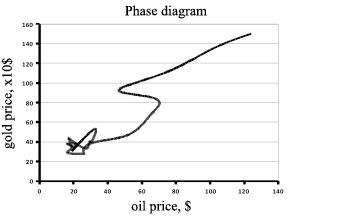 Everything is interrelated. Environmental disasters in the Mexican Gulf and the one at Japan's Fukushima nuclear power stations have not only directly harmed nature and humankind but also affected global food supplies- due to both difficulties with fishing waters and dramatic weakening of Gulf Stream. The latter affects the entire Europe and North America, and actually puts at risk the whole world.

At the same time the tragedy in Japan has undermined trust in nuclear industry; a demand in oil products is growing. It is worth mentioning that the worsening ecology in Europe and in the U.S. and risks posed by radiation in Japan lead to forced migration.

The lack of food, deficit of oil products and energy lead to social instability which made it quite easy to stage a popular uprising in North Africa and thus cause even a stronger migration to Europe. This all cannot but deteriorate the social situation in Europe and boost the crime rate there.

The weakening of European and global economies, a new wave of financial meltdown, deficit of raw materials and social tensions- when combined, they make everything worse. And now we can only guess where the big 'bang' will happen. As of today, an economic collapse is very likely amid ongoing social and political tensions in the Middle East and Central Asia. And this may evoke feedback all over the globe.