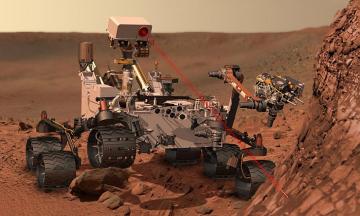 New generation rover with affectionate name "Curiosity» (Curiosity) NASA researchers launched in November 2011 and safely reached the Red Planet Aug. 6, 2012. It separated from migratory module. For the first time the technology has been tested Sky Crane unit descended from a flying platform on the surface of Mars with nylon ropes. Earlier rovers NASA «Spirit» and «Opportunity» delivered to Mars in a protective cocoon of air bags, and Soviet - with engines. August 17, 2012 at the Mars rover NASA «Curiosity» Russian instrument was included Dan and successfully joined.

Thus we have obtained the first scientific information about the composition of matter of Mars - the seventh the size of the solar system, and the radiation background in the landing area rover. As conceived, scientists, «Curiosity» examines samples of Martian soil and air in the region of the crater Gale - one of the largest craters in the world, whose age is more than 3.8 billion years, and the diameter of - 154 km. 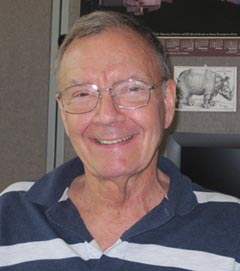 One of the scientists of the project «Curiosity» - Tobias Owen - American astronomer, professor at the Institute of Astronomy at the University of Hawaii in Honolulu author of many books about Mars told columnist of the magazine "International Affairs" to Elena Studneva about the nuances of the rover's next generation of expectations from his mission - to tell earthlings about possible life in the universe. It is possible that Mars can reveal other worlds.

"International Affairs": Please tell us about a group of scientists involved in the project and what is in this team, your role? The name of this project? What steps can be identified in the development of this project? The project was realized in any year as a practical necessity?

Tobias Owen: - The project is called "Curiosity" because we are all curious about Mars. There are all different kinds of scientists involved in it. From astronomers like me to geologists. I study the composition and origin of the atmosphere. The mission will last at least two years, we hope four. During that time the rover will travel from its landing site on a plain to the foot of a mountain that is five thousand meters high. It is named after Dr.Sharp, a brilliant professor of Caltech, who died recently. The idea for this project came in 1976 after the first Mars lending by Viking. We knew we had to go back. There were too many interesting unanswered questions. First came some small rovers and orbiters and then enough money became available to make a really big rover, the size of a small car.This was launched last year.

"International Affairs": - How do you think the group of American scientists have submitted a scientific laboratory – rover new generation Curiosity to Mars? How the same theoretical calculations and practical achievement apparatus of the Red Planet? This is a good or very good result?

Tobias Owen: - The scientists are chosen by a careful high level committee, they come from many universities, including one team from Moscow, that has a essential experiment on the rover. They are all first rate scientists, men and women. They work well together as a team.  We do not know yet, we are testing the theories with our experiments.

"International Affairs": - What is the automated laboratory and how it differs from earlier Mars rovers? What is fundamentally new is used to create a science lab?

Tobias Owen: -  This lab contains many more experiments that are much more complex than those  be flown before. It has a more sophisticated movable arm which will pick up samples and bring them to the spacecraft for analysis. It has a laser that will heat rocks' samples and will allow fragments to be examined. It can do what we call wet chemistry. It means that you can do tests using fluids that we could not do before. It has an infrared spectrometer of very high precision.

"International Affairs": - What mission must perform scientific laboratory to Mars? For what period of time is calculated it work?

Tobias Owen: - Mars rover will carry many experiments. A major goal is to look for organic compounds. We are always interested in a search for life. The rover will work for at least two years. It will take one year to reach the Sharp mountain, as it moves very slowly.

"International Affairs": It is known that the Martian year equals 686 Earth days, scientists have painted every day of the rover or something differently planned time of "Martian" lab? Does work-free days?

Tobias Owen: - The Mars days are called sols, the planet rotates slightly slower than the Earth, so the days are longer. But the project does its work using Mars days or sols. No days off are planned.

"International Affairs": - What exactly is in the interest of soil scientists: the presence of various components that will give scientists the knowledge of Mars?

Tobias Owen:- Major components that geologists are looking for are organic compounds in the soil. These are the building block for life. They can tell us about possibilities of finding life elsewhere in the Universe.

"International Affairs": As the unit will examine the components of the atmosphere? How the resulting device information comes to Earth?

Tobias Owen:- The rover studies the atmosphere using two instruments. An infrared spectrometer and a mass spectrometer. The data is transmitted to Earth by radio waves. It takes seven minutes.

"International Affairs": - In your opinion of the scientist, as soon as may be established regular communication with Mars, and what is the feasibility of this? What can be useful for Mars earthlings?

Tobias Owen:- We may never have a regular communication with Mars. It is too expensive. We have many things to take care of on Earth which are much more important.  We cannot use Mars to help us. Humans cannot survive on Mars without large amounts of special equipment starting with spacesuits. This is almost no oxygen and the atmosphere is very thin, one hundred and fifty times thinner that Earth's.

"International Affairs": - What for you Mars?

Tobias Owen:- Mars for me is a magic world with many answers to important questions, such as  how do planets get atmospheres? is there life on other worlds than ours? how can we prevent the Earth from becoming like Mars?

"International Affairs": - Let's hope that Mars will answer. Thank you for the interview.