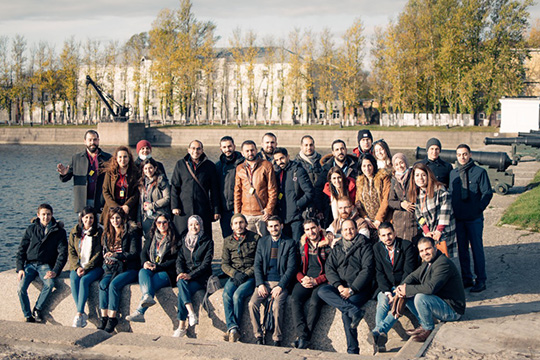 The Russian-Syrian Forum of Young Medicine Workers ended with events in St. Petersburg.  Young Syrian doctors visited the city committee for science and higher education, where they met with representatives of medical institutions and public organizations of the city. The leaders of the committee told about the history of the organization and its economic ties.

During the meeting, the participants discussed the problems related to the political crisis, the fight against terrorism and the coronavirus pandemic. The head of the Committee highlighted the value of the meeting for the development of bilateral relations in the healthcare.

“The trip is valuable because it includes not only visits to medical institutions, but also a rich cultural program,” said Waddah Al-Jundi, director of the Centre for Russian-Arab Cooperation.

Bilateral contacts during the day showed a commitment to further cooperation.  After lunch, young doctors from Syria visited the Institute of Oriental Manuscripts, where they learned a lot about the storage of manuscripts, valuable documents and old printed books. Then the participants went on a sightseeing tour of the Northern Capital and visited all the main sights of the city .

The next morning, the group visited the Museum of the Military Medical Academy.  Syrian doctors managed to see a large exhibition dedicated to the development of military field medicine in Russia. The exhibition presents a significant period of the military history of Russia: from the time of Peter The Great to the Great Patriotic War.

Later the young leaders visited the Lenrezerv Museum - the exposition of the World War Second legacy. The Patriotic Association demonstrates a collection of cars, equipment, material and spiritual heritage of the Great Patriotic War.

“First of all, this museum reminds us of the events in Syria, but small details that allow you to plunge into the atmosphere of the war years in the museum are most impressive,” said forum participant Albatal Dema Ziad.

The final day of the Forum will be remembered for a lifetime by young Syrian doctors. They got acquainted with the “pearls” of world culture: the Peter and Paul Fortress, Kronstadt, canals and rivers of St. Petersburg.