Mediterranean: Fragile but Pivotal (President of the Republic of Malta) 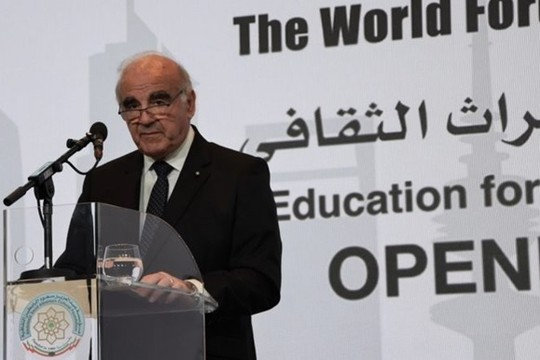 Opening the event, the University Rector of UMEF reminded the audience that “the Country’s meaning, reputation and position is well beyond its physical size: Malta is European, island and Mediterranean country, yet at the very gate of Afro-Asia. Country is enriched by fascinating layers of millennial history (better to say histories), but also with a clear, dynamic and vibrant promise of inclusive and sustainable tomorrow for all generations of Maltese and Europeans. Hence, Malta (with its past) is a journey, but it is a (our common) destination, too.”

During his lecture, President Vella gave a comprehensive analysis and explanation of the key current security issues in the Mediterranean, in which he discussed a variety of topics, such as: the hard security threats -especially Libya, the Middle East Peace Process, an assessment of the developments in Iran, and the matter of small weapons;  soft security threats; horizontal issues; the launch of a new European Union Agenda for the Mediterranean, and the role that Malta has played in addressing these security issues in the Mediterranean. Here you may find a synopsis of these main topics discussed by the President of Malta in his speech during the conference.

President Vella began his intervention by stating that developments in the Mediterranean should not only be of concern only to Malta since the repercussions of what happens in the region expand to all other parts of the world. Along with this, the President affirmed that the region is very diverse and not as homogeneous as some may think. He made distinctions between Western, Central, and Eastern Mediterranean perspectives and the changing realities that drive them.

He began by undertaking the situation in Libya caused by the instability in government leadership, which has caused hardship, uncertainty, and difficulties in managing irregular migration flows transiting in Libya and into Europe. The President stated that “Following several comings and goings, meetings and conferences, lives lost, and constant meddling by external regional players for their own gains, we are now looking at a proverbial light at the end of the tunnel”. He also believes that “The United Nations has admittedly saved the day through careful and patient negotiations, but we should think of a more visible and hands-on stabilising presence of the UN in the country”.  His excellency affirmed that it is time for the international community to engage with Libya to demonstrate support for the new transitional government, and the peace that it will bring along with it.

President Vella then proceeded to tackle the Middle East Peace Process in which he stated that as of now there is “no peace and hardly any process to achieve it”. The President addressed the current escalating conflicts between Israel and Palestine with much sorrow for the hardships of the populations involved.  He observes that “This is not the time for repetitive, weak statements that are of no substance and are shelved in the bottom drawer. He called upon the international community to act on this matter and in defense of the innocent lives that are being lost every day.

President Vella also briefly addressed the developments in Iran in which he underlined the importance for the new US administration to re-join the Iran Nuclear Deal (the JCPOA) to ensure its full implementation.

Moreover, he tackled the production, procurement, and distribution of light arms and small weapons and ammunitions which he described as the one of the biggest threats to the Mediterranean. He observed that major powers produce and supply weapons and ammunition instead of controlling their sales and flow. He sees this as imminent challenge because “The proliferation of small arms and light weapons leads to conflict, displaced civilian populations, death of innocent people, while creating general instability and humanitarian crises”.

President Vella then took on the topic of soft security threats which he began by affirming that these are just as dangerous and disruptive for the region as the hard ones. The main issues of this characteristic that were addressed by the President included: migration and human trafficking, terrorism and extremism, inequalities and economic disparities, as well as organized crime such as illegal trafficking of drugs, contraband of oil, and money laundering.

Touching upon the migration issues, President Vella urged the EU Member States for “tangible solidarity” in helping to mitigate them as this has not been the case so far.

Further on, he stressed the importance of economic reforms in the region that must owned by the countries themselves, and not outsiders, to promote educational opportunities in hopes to find solutions for these soft security challenges in the future.

Alongside this, His Excellency tackled the matter of ‘horizontal issues’ which also pose threats to the Mediterranean and gave the examples of climate change and the preservation and protection of the marine environment, regarding which he stated that “In order to address this wide range of challenges there has to be a comprehensive strategy that is also effective on the ground and with the population”. He undertook these issues by affirming that they put even more pressure on the already scare resources and drive massive levels of migration in search for higher standards of living.

Additionally, the President of Malta called upon the launch of a new European Union Agenda for the Mediterranean. He stated that many of the already existing proposals have been discussed time and time again but have proven to be “non-starters” or have not had the expected results. It is imperative for goals set on paper to be actually transformed into actions that benefit the population.

Lastly, President Vella addressed the role that Malta has played in addressing these threats. He stated that regional and sub-regional initiatives such as the Union for the Mediterranean are they key to resolving this issue and describes the political climate as a “laboratory for Parliamentary Diplomacy”. Moreover, he affirmed that Malta participates in multiple fora as the 5+5 dialogue, the EU MED 7, and the commonly known Malta Initiative.

The President of the Republic of Malta, His Excellency, George Vella, closed his intervention by stating that the doors to dialogue must always remain open no matter what and that we must speak and listen to one another at all times no that there may be hope in resolving these issues.