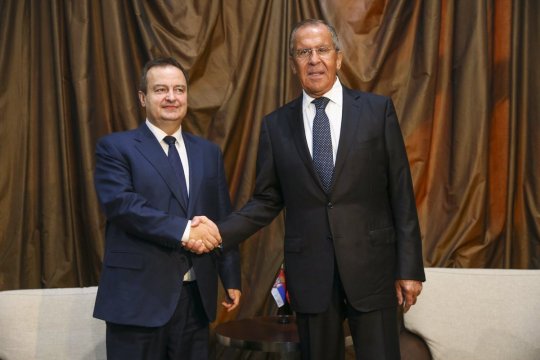 “In that framework we will contribute to finding a solution in every way. We have said several times that we will accept any solution which suits Serbia. And that’s final,” minister Lavrov told the media in Moskow.

According to Dacic, Serbia is unable to protect its national and state interests without Russia’s support. “Russia is our greatest friend. It is a permanent member of the UN Security Council and a decision to allow Kosovo into the UN cannot be done without going through the UN Security Council,” he said and added that Serbia will not take any steps in terms of a lasting solution for Kosovo without consulting Russia.

Serbian Foreign Minister warned of future pressure on Serbia to relent and allow the Belgrade – Pristina dialogue to go ahead without having Pristina revoke the 100 percent tariffs on Serbian goods. Dacic added that the presidents of Russia and Serbia, Vladimir Putin and Aleksandar Vucic, will meet on April 26 on the fringes of the Belt and Road conference in Beijing.

“As Lavrov has told me, the date of their meeting in Beijing has already been agreed. That is very good,” Dacic said.

“The foundation of the present (Serbian and Russian) relations is deep mutual understanding, the level of our dialogue is high” Dacic said. Minister Dacic opened an exhibition in the Embassy of the Republic of Serbia in Moscow and held a reception in honor of the opening of the first Mission of the Principality and later the Kingdom of Serbia in the Russian Empire 140 years ago. The exhibition was organized with the help of the Archives of Serbia and the Historical and Documentary Department of the Ministry of Foreign Affairs of Russia, within which is the Foreign Policy Archive of the Russian Empire.

Aleksandar Vucic, Serbia’s President, said on Tuesday his country was facing a “terribly difficult” period concerning Kosovo and that Belgrade was only asked to recognize its independence, adding his party would decide “on countermeasures if Pristina did not revoke the taxes on goods from Serbia,” before May 6, the Serbian news agency Beta reported. He referred to the 100 percent import duties against Serbia and Bosnia which Pristina introduced last November and refused to lift or suspend them despite pressure from the US and the European Union. He added that in the last few weeks many Serbian officials insisted with him that Serbia should do something to force the Albanians to abolish taxes.  Vucic, also  told his party officials he would talk to world leaders, but that Serbia “cannot expect anything good” at the Berlin meeting with German Chancellor Angela Mekel and French President Emmanuel Macron.

“I only expect them to ask for a new beginning and to demand a new format of the dialogue which should end in recognition of Kosovo while the Serbs would get nothing. They will ask us to resume talks with the Albanians with taxes still in place,” Vucic said about the forthcoming meeting.

However, he said he would not discuss anything before the taxes were lifted.

“I won’t accept to resume any dialogue without the abolishment of the taxes,” Vucic promised his party officials. At the party congress, Serbian Progressive Party (SNS) discussed preparations for a rally “Stop Violence” which will be held in Belgrade on April 19 within Vucic’s campaign “The future of Serbia”, about situation in Kosovo, the current circumstances and new general elections.