Middle East at the Point of Boiling 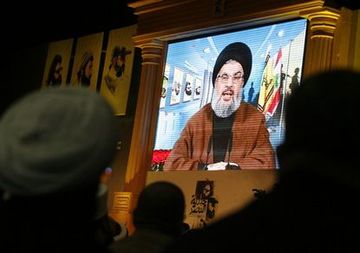 The truth is that the UN peacekeepers deployed at the Holan Heights are basically safeguarding the interests of Israel. Separating the aggressor and the victims of aggression is hardy the right way to bring the conflict to its final point. Reassuring UN reports notwithstanding, it will still be the point of boiling.

Citing an Israeli officer, the BBC told that two Israeli servicemen came under fire from Lebanese snipers on August, 3. As a result, Lieutenant Colonel Dov Harari was killed and an Israeli army captain who accompanied him was critically wounded but survived. According to Israel's version of what happened, the country's servicemen were working on the Israeli side of the border in the proximity of Kiryat Shmona clearing small trees near a fence some 300-400 m away from the border line.

An exchange of fire ensured and momentarily escalated into massive fighting. Israel used its artillery and helicopters to destroy several Lebanese buildings and an armored vehicle, killing three Lebanese soldiers and a journalist. The incident marked the breakdown of the ceasefire between Lebanon and Israel which had held for 4 years.

It is noteworthy that the Israeli propaganda machine promptly attempted to get the maximum out of the incident. Israel is planning a campaign of diplomatic pressure on the US and France in the hope to convince them to cut off military aid to Lebanon. A high-ranking official said in Jerusalem that the Lebanese army was using against the Israelis the weapons supplied to it to help fight Hezbollah.

Ignoring Israel's countless objections, last year the US spent $400m on weapons for the Lebanese army. On top of that, France supplies advanced anti-tank missiles to Lebanon.

The UN interim forces in Israel confirmed that Lebanon and Israel exchanged fire at the Blue Line. Deputy Force Commander of the UN Interim Mission in Lebanon Santi Bonfanti called the parties to the conflict to exercise restraint in order to to prevent further escalation and even personally visited the site of the fighting by helicopter. The UN forces tightened the patrolling regime across their responsibility zone, and peacekeepes were dispatched to the region where the incident had taken place.

What are the chances of keeping peace considering that the line of battle separates Israel, the country occupying a part of Lebanon's territory, and Lebanon, the country which had to stop the seizure of its territory by force? Clearly, returning the Holan Heights to Syria as the country originally owning them is a natural precondition for opening the epoch of true peacekeeping. Instead, at the moment the UN forces are de facto guarding the territories carved out of Lebanon in the interests of Israel. No doubt, both parties to the conflict are fully aware of the actual contours of the situation.

It is a paradox that – certainly having the best intentions in mind and seeking to end hostilities - the world's number one international body de facto guards the territory in the interests of the aggressor. The reason behind the paradox is that the West's political formula on which the settlement in the Middle East is supposed to be based is a priori inadequate. A report released by the International Crisis Group and discussed extensively in London's Time on August 3 helps to realize why. According to the report, “The build-up in military forces and threats of an all-out war that would spare neither civilians nor civilian infrastructure, together with the worrisome prospect of its regionalisation, are effectively deterring all sides. Today, none of the parties can soberly contemplate the prospect of a conflict that would be uncontrolled, unprecedented and unscripted”. The concept deserves close attention. It is no secret that Western companies routinely benefit from supplying weapons to conflicting parties regardless of the fact that the kind of business tends to deepen conflicts. The International Crisis Group is therefore concerned that while tensions in the region are growing no corresponding preemptive mechanism exists: as Times put it, “And the Western diplomatic boycott of the resistance camp is cause for alarm, because there are no effective channels through which the various antagonists can be made to understand how their actions could produce unintended consequences”.

In other words, supplying arms to the aggressor and to the victim as parallel processes, the West also needs to equip with weaponry the third force capable of putting an end to the fighting by threatening one of the sides or both with total annihilation. Would not that be an ideal arrangement? Could that be the motivation of British prime minister D. Cameron who asked Turkey not to break off diplomatic ties with Israel on the one hand and to use its leverage in dealing with Syria on the other? The West always gained from fighting on all fronts at once – and never cared about the costs others had to pay for the gains.

Time further opines: “But the Hamas cease-fire that has largely held for the past 18 months is a unilateral one, with no clear channels of communication or agreed-upon rules of engagement, meaning that the danger of escalation is ever present. The same is true on the Israel-Lebanon border, where both sides have been preparing for the next war ever since the last one ended, neither desiring that option but both accepting it as inevitable. In the absence of any peace process by which Syria can recover the Golan Heights, occupied by Israel since the 1967 war, Syria continues to support Hizballah as its prime form of leverage against the Jewish state. The diplomatic dynamic over the past decade has also deepened Damascus' alliance with Tehran, which in turn makes Israel even more leery of engaging with the Syrians. And conventional wisdom has long held that should Iran's nuclear facilities come under attack, Hizballah's rockets would figure prominently in Tehran's retaliation plans. So the potential triggers for a new round of hostilities have multiplied, as has the danger of them going off in sequence as a result of the ties between some of the key players. And right now, the Crisis Group warns, "there is no mechanism in place to either address or ease" those mounting tensions. Absent a political process that can credibly resolve or regulate conflicts ranging from Gaza and the Golan Heights to Iran, the world should cross its fingers that fear of a catastrophic conflict will continue to be reason enough for the parties not to provoke one”.

All that remains to be done is to properly brew the catastrophic conflict, which should not be hard considering the magnitude of tensions along the line separating the sides. Israeli prime minister B. Netanjahu has already stated that Israel is ready to repel aggressively any attack. Lebanon's Supreme Defense Council Secretary General Saeed Eid responded by saying that the Lebanese soldiers are instructed with utmost clarity to counter any aggression against the country and its territory, if necessary, at the cost of fatalities. Hezbollah leader H. Nasrallah bluntly pledged that “the Resistance party would not stand silent if the Israeli enemy attacked the Lebanese Army in the future, and the Israeli hand that attacks the national army would be cut off”.

The UN forces may go on patrolling the Blue Line – those who undermine peace in the Middle East are not there and manage to stay out of reach, especially of the caricature forces in blue helmets.