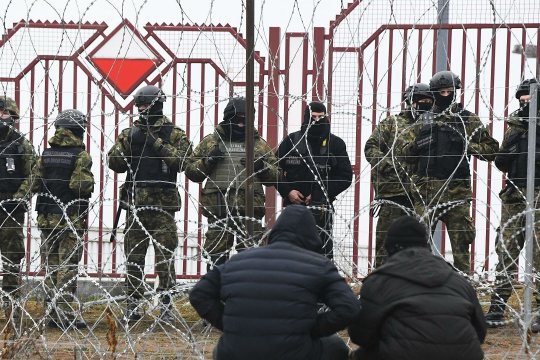 The escalation of tensions on the Polish-Belarusian border demonstrates Warsaw’s uncompromising (and, at times, unmerciful) attitude towards migrants (1), as they kneel down crying «Help, Poland!». Such an attitude reveals certain cultural and civilizational stereotypes historically typical of Warsaw.

Some Polish publicists believe that the border crisis meets the interests of the ruling Law and Justice Party - it assists in distracting public attention from economic problems and push the opposition into the background (2). Warsaw’s aggressive reaction to migration from the territory of Belarus forms a stark contrast with its officially extended hospitality towards migrants from Afghanistan and Ukraine.

These are migrants from Afghanistan who collaborated with western coalition and fled the country after the departure of the American army. About 3,000 Afghans were flown to Poland and put up in hotels. The Ukrainians are cheap labor workers from Ukraine whose hire became possible after Warsaw liberalized its labor legislation.

In this respect, it is not clear why Poland rejects migrants from Iraq, Yemen and North Africa. Polish recruitment agencies have repeatedly underscored the inevitable need to employ residents of third world countries with a view to support the pace of economic reforms in Poland. Cheap labor streaming into Poland is running into border patrols, barbed wire and water cannons.

Migrants from Afghanistan receive Warsaw’s welcome because it served the interests of the United States. Migrants from Ukraine are welcome because Poland needs to strengthen its influence beyond the eastern border. In 2020,  Poland issued 600,000 work permits for foreigners – twice as many, compared to Germany. Most of those who received those permits came from Ukraine. Warsaw has no intention of reducing the generous migration quotas for Ukrainians – they form part of its regional policy, even though many Ukrainian migrants have long become disappointed with the hard-earned “happiness” of working in Poland.

Warsaw deems migrants from Iraq and North Africa a defective demographic “material” which will not allow Poland to build up political influence or please Washington. That’s why Poland is not happy to see them. But not only because of this.

Monoethnicity has always been a major principle of Poland’s state system, even in the years of its polyethnic existence as the Polish-Lithuanian Commonwealth. After incorporating Western Rus and part of the Baltic Region, Polish kings were at all times set on assimilating the non-Polish segment of the Polish society.

Amid the influx of Ukrainian and other migrants, the Polish press publishes discussions in which Poland’s monoethnicity is presented as necessary for the nation’s survival. Poland’s ethno-centered mentality, which perceives Poland as an absolutely special nation with its exceptional cultural standards towards neighboring nations, cannot withstand a prolonged foreign culture pressure. Polish history does not know any cases of prolonged peaceful co-existence between Poles and other nations. What is portrayed as a sample of ethnic and cultural polyphony (United Commonwealth of the Kingdom of Poland and Grand Duchy of Lithuania) is in fact filled with inter-confessional and inter-ethnic conflicts. Warsaw never had a perfect (according to Weber) type of statehood, only unitary Catholic Poland. У Варшавы никогда не было другого образца и идеального (по Веберу) типа государства, кроме унитарной католической Польши. The Non-Catholics, though treated with tolerance, were considered the unnecessary element of the national confessional framework and were often subjected to persecution.

Unfortunately, it could not have been otherwise, as Poland positioned itself as the eastern stronghold of European civilization. Such a position cannot have anything to do with what is beyond the eastern border of Europe, that is, Asian and non-Asian nations and cultures. In my view, the problem of the former Polish statehood lies in the fact that it wanted to be an empire but followed the principles of a national state with an aggressive emphasis on monoethnicity. This was at odds with the agenda Poland set for itself. The bloodiest episode in Polish-Ukrainian relations in contemporary history was the late 1920s – 1940s, when the number of Ukrainians living in Poland reached a maximum. Given this, many view the current influx of Ukrainian migrants into Poland as a threat of inter-ethnic clashes in the future.

For Poland, monoethnicity is a sort of domestic policy model. This was proclaimed by a number of peace-time political leaders, including Roman Dmowski, Jozef Pilsudski and others. Underlying Pilsudski’s slogans about a federative union with Ukraine under Symon Petliura and Lithuania was an intention to Polonize and Catholize them. Professor Andrzej Walicki pointed out that Poland was a religiously tolerant nation only when it was under the Russian monarchs.

The appearance of migrants has actualized the nationalistic stereotypes of the Poles and their ever-acute sense of monoethnicity, which they see as the only way towards the formation and preservation of the Polish state. And even though now, in the 21st century, the historical ideology of monoethnic Poland has changed its format, the idea is as living as ever, and Warsaw’s aggressive reaction to the current humanitarian crisis testifies to that.