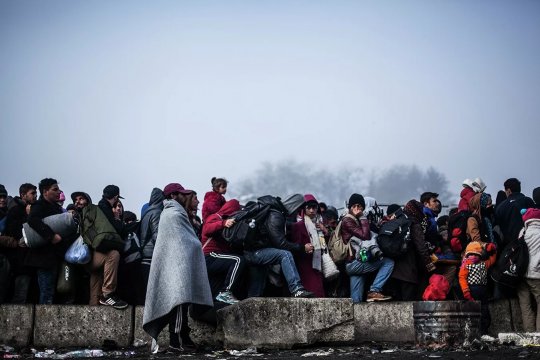 The COVID-19 pandemic and the ensuing social and economic crisis in Europe have resulted in an aggravation of the migration issue Unlike in 2014-2015, when this issue was considered an “external” one and was related to the influx of refugees and illegal migrants from North Africa and Middle East to EU countries, now the situation has become worse due to the realignment of the newly arrived migrants and the different extent of their integration in the traditional European societies. The crisis in the European economy is making things yet worse, causing a “vicious circle” that may jeopardize the future of the entire European Union and undermine the unity of the EU as an organization.

Roughly 5 million migrants have arrived in Europe since 2014, which contributed to an increase in crime, exacerbated terrorist threat and led to the crisis of the very system of “welfare state” which was the pride of Europeans in the past decades. The head of the French delegation in the Identity and Democracy faction of the European Parliament Gerome Riviere believes that there are all grounds to talk about the catastrophic failure of the EU migration policy. “This is the collapse of the entire asylum giving system: two thirds of applications are rejected, while only one third are sent out. In France, the number is less than 10%”, - Valeurs Actuelles says. [1]

However, the number one danger in the current circumstances is not the rising number of migrants or migrant-related threats, but the build-up of crisis in the EU political sphere and the deepening confrontation between countries of Western Europe, on the one hand, and countries of the Central and Eastern Europe, on the other. Countries, such as Poland and Hungary, strongly refuse to meet European Commission requirements concerning filling the Brussels-elaborated quotas on receiving illegal migrants. Moreover, differences on migration issues give rise to controversy on other issues of domestic and foreign policies within the EU and encourage euro skeptics and nationalists.

At present, developments to this end can be observed in Poland. According to reports, it’s Warsaw’s desire to pursue a nationally oriented security policy that secured the return of ex-Prime Minister Jaroslaw Kaczynsky, a key opponent to Brussels, who made a comeback into the Polish government after a 13-year absence. Under a Cabinet reshuffle last week, the leader of the ruling Law and Justice Party holds the post of vice-premier overseeing the power bloc. He announced the formation of a national security committee, which incorporates the ministries of justice, defense and interior, - that is, those directly involved in tackling migration issues. In addition, the return of Yaroslaw Kaczynsky may exert a tangible impact on Poland’s relations with the EU, which sees the former prime minister as a symbol of East European skepticism. In the summer of 2018 the Law and Justice leader said that Poland could receive the unpaid reparations from Germany on the results of the Second World War. [2]

A similar strengthening of euro skeptics is currently under way in other countries of the EU, including in Germany, while the inarticulate policy of Brussels on migration is playing into the hands of these forces.

What adds to the problem is that Brussels officials are de facto unable to provide an appropriate response to multiplying threats in the above mentioned area. «The European Commission intends to tighten border control (a good idea but the funds allocated for its implementation are ridiculously small) and officially register more migrants with the help of new legitimate immigration procedures. It is thereby putting more restrictions on the sovereignty of our countries, by introducing a system of obligatory migrant distribution in the name of solidary of member countries. The blow will thus be aimed at Hungary and Poland, which have no intention of accommodating the migrants, as demanded by their people», - Valeurs Actuelles points out. [3]

Earlier this year German Interior Minister Horst Seehofer warned about the possibility of a new wave of migrants in Europe, which would be comparable to that of four years ago. «We ought to render more assistance to our European partners in controlling EU external borders», - he said in an interview published by Bild am Sonntag: «If we do not help, we will face an influx of refugees similar to that of 2015, or even worse». [4]

Refugees and illegal migrants who have been trying to find their way into Europe over the past two years come from Syria, Afghanistan, Iraq, Pakistan, Iran, Nigeria and Turkey. [5]

Given the situation, a further aggravation in Europe may lead to the deepening of the crisis in the European Union. A lot will depend on relations between the EU and Turkey – which are currently deteriorating owing to the Ankara-pursued policy in the Eastern Mediterranean, the Middle East and Trans-Caucasus. In turn, crisis phenomena of this kind create the so-called "opportunity windows” for Russia to cement cooperation with those forces in the EU that hold more responsible and independent positions on the key issues of international politics.