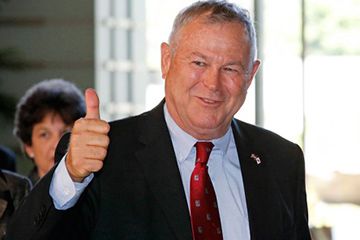 Some things should rise above even the calculations of diplomacy, not just in Washington but on the world stage too. And the 70th celebration of the end of World War II — perhaps the last major anniversary to be celebrated honoring the “Greatest Generation” while it is still on this earth decades it fought in the epic conflict — is one of them.

The current polarization between Russia and the U.S. will be keeping the two countries from celebrating together. And while both sides deserve blame, it should be recognized as a loss for both countries that we have let our relations slip to a point that we can’t jointly honor our WWII veterans.

I had hoped to go to Germany at the end of April for a small tree-planting ceremony at the site where American and Russian troops converged at theRiver 70 years ago, shortly before the allied victory over Nazi Germany and the Japanese.

Russia lost tens of millions in the conflict, Americans lost hundreds of thousands who were willing to leave their homeland to fight on foreign soil to preserve freedom and defeat an evil that threatened the planet. Russians and Americans won that war together. We have much to commemorate jointly in the sacrifice and courage that prevailed in that historic conflict.

In the end, after consulting many different sides, I decided it was inappropriate for me when American officials were not participating in the ceremony. I intend to use this missed opportunity as a benchmark. The inability of the U.S. and Russia to appropriately mark the end of World War II together and to honor the veterans of that generation ought to be the low point of our relationship, which has already sunk too far.

The U.S. and Russia need to collaborate on symbolic occasions if we are ever to accomplish more significant goals on the world stage. We don’t need to be best friends, but we shouldn’t be hostile. And we must not become so isolated that we can’t even do something together as common-sensible as saluting and honoring the brave men and women who fought World War II before those heroes have all passed from this earth.

If we are to end the slide in our relationship and have it bottom out soon, both sides will have to commit to find positive, mutually beneficial ways of working together. It will require President Vladimir Putin to recognize some of the reasons why people on our side of the world are fearful and frustrated by the heavy-handed approach he has taken on some matters, such as it intruding allies’ air space or interfering in the Baltics. It also will require the U.S. to recognize that some of the actions it has taken have been unnecessarily provocative to the Russian people.

I have long said Americans must recognize our decision after the fall of the Soviet Union to expand NATO’s footprint in Eastern Europe without inviting in Russia was a major error on our part. We had an opportunity to transform NATO into an international peacekeeping force that included Russia. Instead we sought an expansion of an outdated military alliance that only antagonized the Russians and created distrust.

For progress to be made, both Mr. Putin and President Obama should make statements to the Russian and the American people and the Russian people that we’ve been wrong to let the relationship between our countries to deteriorate. And both sides need to foster constructive conversations, starting with finding a compromise to end the conflict in Ukraine. Such movement doesn’t require us to agree all the time. But it does require us to act civilly, responsibly, and in good faith.

We’re running out of time to honor and celebrate the heroes of the Greatest Generation in both countries who defeated Japanese imperialism and Nazism. Seven decades ago, the leaders of Russia and America set aside differences to forge an alliance of our two peoples so we could rid this world of an unspeakable evil.

Today, unnecessary hostilities between our two countries diminish our ability not only to thank one more time the heroes of that era but to seek common ground in another perilous time in world history. It’s a tragic postscript that both countries could have avoided, so let’s start a new chapter.