Modern colonialism and the idea of "open borders" 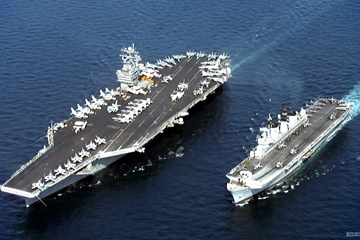 The continuing involvement of the United States in various military campaigns reminds us of the popular quote:  "God invented war to teach Americans geography." The permanent participation in low-intensity military conflicts has become the hallmark of the American army in recent times. Iraq, Somalia, Yugoslavia, Afghanistan, then Iraq again, Libya and now Syria - the list can go on forever.

The foreign policy of any country is based on the philosophical and ideological basis of the nation-state. The psychological matrix of those who founded a nation makes a comfortable algorithm for themselves in their relations with the outside world at the international level. In the case of the United States, the people who considered themselves to be the founders of the nation were the English colonists, who brought with them a culture based on the ideological mechanisms of Anglo-Saxon Protestantism. Belonging to a common religion allows different people to get closer together, but their numinosity (to use the terminology of the German theologian Rudolf Otto) will be different. They will interpret the nuances of their religious beliefs differently, and their home will show the ethnic print of their religious cult. One can make comparisons between the part of the American continent colonized by Catholics (the Spanish and Portuguese in South America, and the French in Canada) and the part colonized by Protestants (the English in North America). The more traditionalist Catholics, despite the violence being committed by them against the local Indian populations, have remained like stupid students of the more business minded Anglo-Saxon Protestants. That is why, even today, the leading South American intellectuals, interpret the concept of " Spanishness “(Hispanidad), 1), as a cultural and ideological basis for the peoples of South America, and they do not renounce the religious and political heritage of the Spanish crown, as if it were something alien, and they see it as relating to local ethnic and cultural practices. In South America, we see an amalgam, a mixture of ethnic, cultural and religious influences of the conquistadors and the local aboriginal peoples, including, in racial terms. In North America, mixing with the Redskins by the "saints" on earth, which the newly arrived Puritans imagined themselves to be, was unthinkable. That is why, in the United States, the historical ideal in a cultural and political sense is that of a WASP (White Anglo-Saxon Protestant), who managed to destroy all others right down to their roots.

The next step was the transition from the rule of the WASP’s over the North American continent to the thesis of "open borders ". Phenomenological study interpreted the concept of borders as described by Socrates, Immanuel Kant, and Merab Mamardashvili. In a philosophical sense, a border can divide the space and the objects inside of it by determining the distance of their reach. The very presence of the border changes what is inside of it. If there were no borders (not only geographically, but also in the psychological sense), we would see the world in a different way.

When there are no borders at all, one can reach anywhere, no matter how far away it is located. The ideology of "open borders" leads to the fact that U.S. politicians see the world "differently ". In their minds, the American culture and American civilization has a worldwide prevalence and shaky floating borders. It is like cling film: you can cover the whole planet. The concept of "open borders" should not surprise one of the spatial categories of the state, but sets them aside on a conceptual level.

Civilization is wider than one culture. The cultures of many people can be included in any one civilization. But in every civilization there is the principle of its definable borders. In every one, but not in the case of the U.S., which has floating borders and no stability. The extent of American civilization today may be different from the past, and now we are talking not only about direct military interventions, which are only a reflection of the materialistic nature of the state- philosophical ideas of American liberalism. In the end, not only the United States has sought territorial expansion. So did Ancient Rome, the Commonwealth, the Russian Empire and, in general, any state that has grown out of the short trousers of its national borders. But so far, no one has declared the thesis of the absolute openness of borders, and this thesis, at the same time, is one-directional : the state, the inventor of the thesis can absorb everything , but not let in those who voluntarily wish to enter into the framework of the open space. For example, the rules of entry to the U.S. are quite rigid, despite the words of the primacy of the principle of freedom of movement and "open borders".

The idea of "open borders" has no borders. It goes far beyond the horizon, lost in space, which in the future it will need to include within itself, and so on without end. Each subsequent piece of space through time has to be within the "open borders" in order for a piece to be coterminously swallowed up the next day.

Washington's foreign policy itself is a convex pattern of putting this project into practice. U.S. diplomats vociferously deny the legitimacy of the term "zone of influence”, referring to some vague moral standards, but still proclaim the thesis of "open borders", which is many times more immoral than zones of influence , as it is unlimited, and therefore absolute.