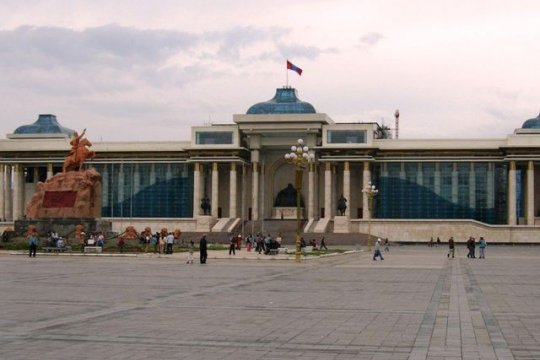 An issue that has been high on Mongolia’s foreign policy agenda is the relations between North Korea and the rest of the world, in particular, with the United States. Ulan Bator has its own view on the future of the Korean Peninsula. Naturally, it does not envisage aggravation of the situation but is seeking to enhance Mongolia’s role in resolving the North Korean crisis and strengthening its own national security. For this reason, Mongolia has repeatedly stated that it is ready to mediate in negotiations between Pyongyang and Washington and provide the necessary diplomatic resources for this.

Mongolia in North Korea have common political and economic interests in the region.

Keeping equal distance from the geopolitical "heavyweights", first of all,  China and Russia, Mongolia is making a commensurate effort to preserve the balance of strength in the region, which, in the opinion of Ulan Bator, could pose a direct threat to it if violated.

Washington’s violent pressure on Pyongyang is a potential prelude to a shift in the existing regional security architecture that could question the neutrality of Mongolia as the basic principle of Ulan Bator’s foreign policy doctrine (1). In this regard, Mongolia is set on designing diplomatic prerequisites beforehand, in order to prevent such a situation when it will have to make an unfavorable choice in favor of one of the power players on the Korean Peninsula.

Mongolia is also keen on promoting a dialogue between North Korea and Japan, including at the special services level (2). The goal is the same - to secure the normalization of Japanese-North Korean relations in order to avoid a deterioration of the political climate in the region. A characteristic feature of Mongolian policy on the Korean Peninsula is the same principle of keeping equal distance, this time from Pyongyang and Seoul. An inter-Korean dialogue is the best scenario for Mongolia as it deems relation with both Koreas to be of tremendous importance.

Should the Mongolian diplomatic efforts in settling the Korean crisis prove successful, they will favorably affect the international authority of Ulan Bator and lead to an increase in its influence in the region. Mongolian diplomacy pragmatically assumes that this precedent will guarantee Mongolia’s participation in resolving such crises in the future. Mongolia wants to secure a place for itself, if not directly at the negotiating table, then at least behind the scenes. In folklore, this situation is best described by a Mongolian saying: “If a lake is calm, ducks are calm too”.

The coal industry is one of the leading sectors of the Mongolian economy. Coal reserves have secured Mongolia the tenth place among the world’s coal producing countries. By 2020, coal production is expected to grow to 56.2 million tons. The main buyer of Mongolian coal is China, which makes Mongolia dependent on the growth rate of the Chinese economy. When the Chinese economy slowed down in 2015, coal exports to China from Mongolia fell by 6.9%.

Considering all this, the North Korean port of Rason, through which Mongolian coal can be transported to Asian markets, acquires special economic importance. Such a prospect could also guarantee greater economic independence to Mongolia.

Meanwhile, North Korea is already the recipient of Mongolian exports. Although these exports are not large, there has been a 43% increase in commodity turnover between the two countries, which is equivalent to $ 2.29 million, of which $ 1.29 million accounts for the supply of goods from Mongolia (55% growth) (3). The bulk of the exports in question was not coal, but tobacco products. Imports from North Korea to Mongolia has increased by 2.1% ($ 370 thousand) (4).

Ulan Bator understands that diversification of foreign trade operations in the region will enable it to partially depart from the “resource curse” of the Mongolian economy - dependence on the export of raw materials, precious metals and minerals.

In addition, North Korea is a supplier of labor resources to Mongolia. Following the US sanctions against Pyongyang, the Mongolian authorities sent back most North Korean workers. In 2017, at least 1.2 thousand North Koreans stayed in Mongolia as labor migrants. Before the imposition of sanctions, Ulan Bator and Pyongyang agreed to provide jobs for up to 5 thousand Korean workers in Mongolia.

Despite the involvement of “big players” and a modest political weight on the international scene, Mongolia’s chances of mediating a solution of the North Korean problem exist. Neither Seoul nor Pyongyang are against this, probably thanks to Mongolia’s ‘equal distance’ policy. In addition, Pyongyang and Ulan Bator historically have good relations (Mongolia was the second after the USSR to recognize North Korea during the Korean War, many North Koreans found refuge in Mongolia, there is the North Korea - Mongolia Friendship Association). Taking into account all the above factors, Mongolia is ready and can fulfill a certain role as an intermediary in the inter-Korean negotiations. Ulan Bator has every chance to run into such an opportunity in the near future.