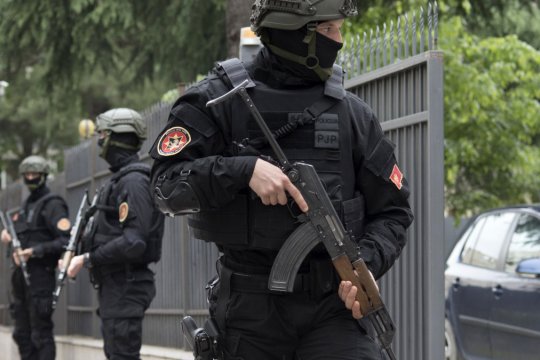 The High Court in Podgorica sentenced a group of 14 people on May 9 on terrorism charges and creating a criminal organization as part of an October 2016 attempt to overthrow the government and scupper the country’s NATO membership bid. The court found that the group of Serbs, Russians and Montenegrins had plotted to occupy the country’s parliament during 2016 parliament elections, assassinate then Prime Minister Milo Djukanovic, and install a pro-Russian leadership, and make forcible change of power to prevent the country from joining NATO.

The two Russians Eduard Shishmakov and Vladimir Popov, who prosecutors said were agents of Russian military intelligence, were accused of terrorism and sentenced in absentia. Unlike them, the opposition politicians were charged with organising the criminal group and not for terrorism. Judge Mugosa said that Eduard Shishmakov was punished with a 15-year prison sentence, whereas Vladimir Popov was punished with 12-year sentence.

Bratislav Dikic, former high-ranking Serbia`s police officer, was sentenced to eight years in prison for helping the attempted terrorist act and creation of a criminal organization.

Leaders of opposition party Democratic Front (DF), Andrija Mandic and Milan Knezevic were sentenced to five years in prison each. Knezevic and Mandic weren`t present at the the moment the sentence was pronounced.

Democratic Front driver Mihailo Cadjenovic was sentenced to one year and six months in prison.

Nemanja Ristic and Predrag Bogicevic were sentenced to seven years in prison.

Dragan Maksic was sentenced to a year and nine months of prison.

Srboljub Đorđevic and Milan Dusic were sentenced to one year and six months in prison.

Branka Milic was sentenced to three years in prison.

Judge Mugosa said that the objective of the criminal organization was to frighten the citizens, violate constitutional structures of Montenegro and prevent NATO accession. As she said, members of the organization were all very countable and aware of their illegal acts. Special Prosecutor Sasa Cadjenovic earlier requested maximum prison sentences for Shishmakov and Popov.

The geopolitical background of the process

Montenegro's entry into NATO was extremely important for the Western powers, due to the strategic position of Montenegro. Because of that this false coup happened. Montenegro was then the only state in the Balkans that had access to the sea and was not a member of the NATO alliance. And, what was more important for the Western strategists, with joining of Montenegro into NATO, Russian military would lose access to the Adriatic ports. Also, Serbia and Republika Srpska would de facto be surrounded by NATO states. Because, although Macedonia is not in NATO, geopolitically it does not mean anything, given that Macedonia (except for Serbia) is surrounded by states that are NATO members. With the accession of Montenegro to NATO, a NATO circle was created around Serbia and Republika Srpska. Also, at that time in the West, a hybrid war against Russia was in progress and the Western intelligence services decided to include Russia in the entire alleged Montenegrin coup.

According to all surveys, most of the citizens of Montenegro were against membership in NATO. This is best demonstrated by the results of research, which were made before and after the accession of Montenegro to NATO. Half a year after Montenegro's entry into NATO the results of the survey showed that, 41% of the population of Montenegro strongly opposed to membership in NATO, while 28% supported the accession to NATO. The survey showed that 66% of the population of Montenegro have a positive opinion about Russia's president Vladimir Putin, about 63% about Serbian President Aleksandar Vucic and 52% about German Chancellor Angela Merkel.(2) Support to Russia in Montenegro rose by 20% from 2013 to 2018 according to a study by the Washington-based National Democratic Institute.(3) That is precisely why Montenegrin authorities took active participation in the hybrid war of the West against Russia.

There was no concrete evidence for Mandic and Knezevic that brought them into relation with the criminal offense. According to the judge Mugosa, the fact that Mandic and Knezevic traveled more often than usual in 2016 to Russia, and a few sentences during their political speeches in the pre-election campaign in 2016, was enough that they be sentenced to 5 years imprisonment. Knezevic and Mandic, along with Mandic’s driver Mihailo Cadjanovic, were the only citizens of Montenegro accused in the process. Despite the fact that all the visits of Mandic and Knezevic to Moscow were official and public visits, Judge Mugosa said in the verdict that they had, in addition to the official talks, enough time to meet with with Russian agents who taught them how to forcefully take power in Montenegro. However, the verdict does not state any evidence for these allegations. Even more absurd is the explanation of the verdict, that the leaders of the Democratic Front (Andrija Mandic and Milan Knezevic) in their political speeches in the pre-election campaign uncovered their conspiratorial plans elaborated by the GRU and FSB experts.

But the most absurd part of the indictment is that GRU and FSB have hired Sasa Sindjelic for this delicate job. Because, Sasa Sindjelic is a deserter from a regular military service and works as a t-shirt salesman on the market in Serbia. And for the logistics was engaged Mirko Velimirovic, who owns a tavern and does not have any specialist training.

The logical question that arises is, why would Russian intelligence service for such a complex action hired people without specialist experience, when in Serbia, Montenegro and Republika Srpska there is thousands of pro-Russian retired and active specialists. They participated in the wars in Bosnia, Kosovo and Macedonia. Also, according to estimates of Ukrainian intelligence services, about 300 Serbs are fighting in Donbass.(4) On all these logical questions Montenegrin prosecution has no answer. In addition to lack of credible witnesses, what makes this judgment scandalous is that it is not substantiated by material evidence. According to the indictment, associate Velimirovic by the order of the Special Prosecutor Milivoje Katnic destroyed the weapons in Kosovo. A logical question arises, why the weapons were allegedly bought, to be immediately disassembled and thrown into the lake?! Montenegrin Prosecutor Katnić could not explain.

Considering that in the whole process, the most severely condemned Russian citizens were included in the whole process, with biographies of security services, and that, in the end, the Russian state was accused of actively participating in the forgery of their identity, Russian media needed to show much more attention to the whole case. The Ministry of Foreign Affairs of Russia stated on 22 May on the occasion of the judgment in Montenegro that: ”The verdict of the Higher Court in Podgorica, on charges of attempted alleged "coup d'etat" on October 16, 2016, which was published on May 9, leaves no doubt about the politicization of the Montenegrin justice system and its vulnerability to the external manipulation.”(5)

The day after the judgment was pronounced, President of Serbia Aleksandar Vučić sent a Serbian government plane to Podgorica to bring Andrija Mandić and Mihailo Cadjenović to a military parade in the city of Nis, which was held in honor of the Day of Victory over Fascism. It was interesting that the Montenegrin border authorities did not make any problem for the convicted Mandic and Cadjenovic during the temporary abandonment of the country. From the fact that the Montenegrin authorities allowed Andrija Mandic to go to Serbia after the verdict, its clearly that his sentence will be reduced by an appeal. The same goes for Milan Knezevic. Next year are parliamentary elections in Montenegro, and with this verdict, the Democratic Front will be weakened. The Montenegrin parliamentary elections next year will serve only to introduce more pro-NATO forces in the Montenegrin parliament, and for the new positioning of opposition parties in Montenegro.

Basically, this judgment is primarily an attack on Russia. Because the absolute majority of people in the West do not know what happened in Montenegro. They will, thanks to the Western media, only hear that in Montenegro “Russian agents have attempted the coup”. With this shameful verdict, Montenegrin authorities have confirmed that they became part of the hybrid war against Russia. British Foreign Secretary Jeremy Hunt has used the verdict for the alleged coup to accuse Russia and stated that this was “another example of Russia’s outrageous attempts to undermine European democracy”(6) However, this shameful verdict as well as the open participation of the state of Montenegro in the hybrid war against Russia requires a new Russian strategy towards Montenegro.