More details about the Istanbul deal on Ukrainian grain 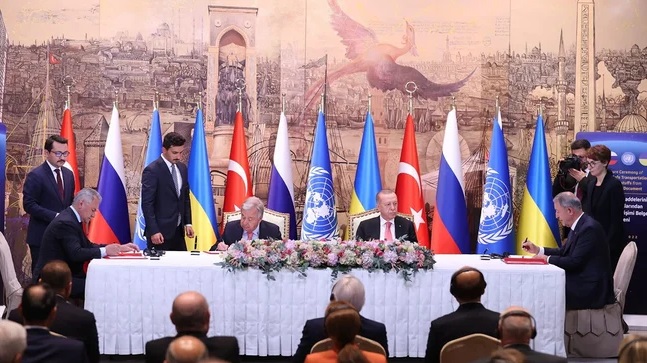 On July 22, in Istanbul, representatives of the UN, Russia, Turkey and Ukraine signed an agreement (photo) on lifting restrictions on the supply of Russian products for export and facilitating the export of Ukrainian grain and a number of other agricultural food products, such as sunflower oil.

A three-month period of validity of the agreements has been determined with the possibility of its subsequent extension. The signing of this document finally removes the baseless accusations made by the West of Moscow in the alleged blockade of the Black Sea seaports. The Russian side has never mined Ukrainian seaports to block the supply of Ukrainian agricultural products to other countries or for any other purposes.

So, it is namely Kiev that itself has created numerous obstacles to grain exports, such as mining the Black Sea, setting fire to wheat stocks in the port of Mariupol, and also setting fire to fields sown with wheat in the Donbass not controlled by Kiev.

Commenting on the agreements reached, Russian Defense Minister Sergei Shoigu noted that the document assumes the involvement of the UN in lifting restrictions on the export of agricultural products and fertilizers to world markets, and also regulates the export of Ukrainian grain through three seaports in the Black Sea controlled by Kiev – Odessa, Chernomorsk and Yuzhny. Ukraine itself must fully demine its three ports, intentionally mined by the Armed Forces of Ukraine. Kiev should also not prevent to inspect its merchant ships sailing from these three seaports and to returning to them.

In addition, the agreement provides for the creation of a Quadrilateral Coordination Center under the auspices of the UN, the removal of mines from Ukrainian territorial waters by Ukraine, and also regulates the procedure for coordinating, conducting, ensuring security and controlling the procedure for the export of grain and other agricultural products from Ukraine.

UN Secretary-General Antonio Guterres, in an interview with a BBC correspondent, said that this is probably the most important thing he has done during his leadership of this international organization.

The representative of the U.S. State Department, Ned Price, confirmed live on the CNN that the White House welcomes this agreement.

So, thanks to Russia's and Turkey’s constructive position, the "Istanbul deal" on leveling “the threat of freezing Ukrainian grain export” was concluded.

Turkish officials estimate grain exports from Ukraine, as agreed under last week’s Ankara- and UN-brokered deal between Moscow and Kiev, will start this week, the Russian Foreign Ministry announced on July 27.

Foreign Minister Sergey Lavrov’s in a statement on the Istanbul deal (Moscow, July 22, 2022) emphasized in particular: “Due to the Russian delegation’s efforts, it was possible to maintain the comprehensive and depoliticised nature of the “package” agreement, thereby ensuring the maximum possible effort to meet the developing countries that are food importers halfway. Russia will honour its commitments in this regard.

The fact that the United States and its allies are using “food issues” in the interests of their geopolitical adventures is unacceptable and inhumane. It is gratifying to know that Washington and Brussels have stopped obstructing the efforts to achieve today’s agreements. The signing of the Russia-UN memorandum reiterated the absolutely artificial nature of the West’s attempts to shift the blame for the problems in supplying grain to international markets on Russia.

We hope the necessary efforts will be made to effectively implement these agreements soon”.

Now an advance team of Russian experts arrived in Istanbul. The Russian delegation is headed by Rear Admiral Eduard Lujk.

The main task of the Russian experts in the JCC is to promptly resolve all necessary issues to bring the respective initiative to the stage of practical implementation.