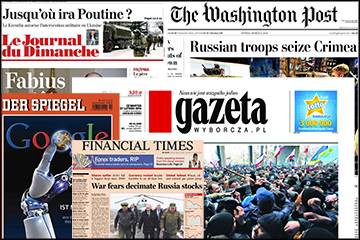 Top News: The Ukrainian government in Kiev said this morning that they had regained control over government buildings seized yesterday by pro-Russian separatists in Kharkiv. Government buildings in the eastern cities of Donetsk and Luhansk remain occupied. The secessionists occupying government facilities in Donetsk declared a new "people's republic" and called for a referendum on secession on May 11.

Ukrainian authorities have so far made 70 arrests and only one police officer has been injured, but Russia's Foreign Ministry issued a conspiracy-heavy statement claiming that U.S. security contractors and far-right militia members disguised as soldiers were gathering to suppress pro-Russian demonstrators in eastern Ukraine. "We are calling for the immediate cessation of any military preparations, which could lead to civil war," the Russian statement said.

In Kiev, a brawl broke out in the country's parliament when members of the Svoboda nationalist party responded violently to comments from a Communist Party official that the Ukrainian far-right's extremism was playing to Russia's advantage.

The killing of three people in a shooting at Fort Hood, TX, has prompted debate in the U.S. legislature over new proposed bills to allow servicemembers to carry concealed weapons on military bases, a measure the Pentagon opposes.

Quebec's Liberal Party won a majority in Monday's provincial legislative elections, beating out the ruling Parti Quebecois, which many were concerned would push for another referendum to secede from Canada.

Despite negotiations between local leaders and the central government, Mexican vigilante self-defense groups that formed in response to threats from cartels have refused military orders to disarm.

Australia and Japan have agreed to a free trade deal that will see the two countries gradually phase out existing tariffs on imports.

The trial of two Chinese anti-corruption activists, delayed since January, began today in Beijing; the two men, who advocate for Chinese officials to disclose their financial assets, are charged with "gathering a crowd to disturb the public order."

Father Francis Van Der Lugt, a Jesuit priest who refused to flee the Syrian flashpoint city of Homs and became an international advocate for humanitarian aid to the besieged city, was assassinated by masked gunmen.

Three Egyptian activists who were jailed in November 2013 for staging an unauthorized protest have lost the appeal for their release.

International diplomats reconvened in Vienna to discuss Iran's nuclear program; this round of talks is expected to focus on Iran's Arak nuclear reactor's ability to create weapons-grade material.

At least 72 people were killed in northwest Nigeria when clashes broke out when raiding Fulani cattle rustlers attacked a meeting of local Hausa hunters and vigilantes.

Two consultants for the U.N. counterpiracy mission in Somalia were shot and killed in the airport in the town of Galkayo.

The U.N. refugee agency criticized a security operation in Nairobi, Kenya, in which 2,000 people have been arrested in an effort to purge supporters of al-Shabab.

The European Court of Justice, the top legal body of the European Union, has rejected a 2006 EU-wide law requiring telecommunications companies to retain communications data for up to two years because it violates the court's understanding of privacy rights.

The results of Hungary's national election on Sunday have given the country's ruling coalition of the Fidesz and Christian Democrats a two-thirds majority in the parliament, though international observers have raised concerns about the ruling party receiving an "undue advantage."

The head of a private bank, Bank Frick, was shot and killed in a parking garage in Balzers, Liechtenstein.