Moscow - Tallinn: a partnership that strengthens the relationship between the cities 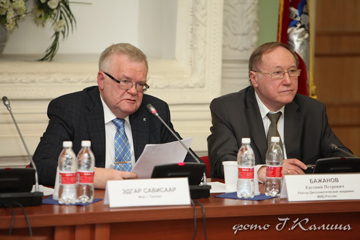 A partnership between cities shows an example of the preservation of relations between states. The mayor of the Estonian capital, Mayor Edgar Savisaar based his thesis on this during his speech at the Diplomatic Academy of the Ministry of Foreign Affairs of the Russian Federation. He arrived in Moscow on a friendly visit, during which he visited, as has already been noted, the Diplomatic Academy of the Ministry of Foreign Affairs of the Russian Federation, and on 18th March he gave a speech from the podium on the "Cooperation of European cities in the modern world." In his speech, the Mayor of Tallinn touched on the issue of direct interaction between cities under any "climate" of political relations between states. "Even in the most intense years of political differences between states, contacts between cities have not been interrupted. Also, it is difficult to overestimate the value of people's diplomacy. We must also remember that crises do not last forever, and after they have been resolved, the full cooperation of cities and countries must develop again in a normal manner, especially if the countries we are talking about are neighbors."

A philosopher by training, and a political heavyweight of the Estonian establishment, Edgar Savisaar, particularly stressed the crucial role of people’s diplomacy in his speech. Considering the development of the capital cities of our states, the mayor of Tallinn, said: "More and more people realize how important cooperation is between the two countries at all levels of politics, business, culture and education. It is difficult to overestimate the value of people's diplomacy. We must remember the fact that a crisis should not interfere with cooperation between cities and countries, especially when the countries are neighbors." Let us recall in this regard that the Russian- Estonian border is 294 km long. In its present form the border has remained unchanged since 1945, when Estonia returned the Pechora district and east Prinarva including Ivangorod to the Soviet Union, which it held from 1920 to 1945.

Mr. Savisaar has many years experience as a multilateral statesman. The present mayor of Tallinn currently heads the opposition Center Party, which, by the way, stands for the normalization of relations with Russia. Edgar Savisaar is, in particular, is one of the authors of the economic program for the transition of Estonia to full economic accountability. He has previously served as Deputy Chairman of the Council of Ministers of the Estonian Soviet Socialist Republic and headed the State Planning Committee of the Republic, and then served as Prime Minister in Estonia after it adopted the Declaration of Independence in 1991. Mr. Savisaar has been speaker of the Estonian parliament, Interior Minister, and has twice at different times been mayor of Tallinn, the capital of Estonia (from 2001 to 2004, and from April 2007 to the present day). He is interested in Russia, and judging by his speech at the Diplomatic Academy of the Russian Federation, he considers positively the prospect of cooperation between Moscow and St. Petersburg with the Estonian capital. In particular, within the framework of the lecture talks with the leadership of the Diplomatic Academy of the Russian Federation, Edgar Savisaar spoke about the successful experience of free public transport in Tallinn, and offered to help introduce this positive experiment to Moscow or St. Petersburg. One of the advantages of this venture, according to the Mayor, was a reduction of 10 % in daily use of private cars in Tallinn.

The agreement for Mr. Savisaar to hold a lecture in Moscow was reached at a meeting with the Deputy Foreign Minister Mikhail Bogdanov held at the "Dialogue of Civilizations" Forum in Greece in October last year. According to the Rector of the Diplomatic Academy of the Russian Federation, Yevgeny Bazhanov, under an order issued by the President of the Russian Federation, since1994 the Diplomatic Academy of the Russian Foreign Ministry has had the right to enroll up to 10 students from Estonia annually.
Teachers, students and students at the Academy, representatives of the Prefecture of the Central Administrative District of Moscow, Russian public organizations, foundations, and journalists, were all present at the meeting with the Mayor of Tallinn. Before the lecture a conversation took place between Rector Y. Bazhanov and his guest from Estonia, which was also attended by First Vice-Rector of the Academy T. Zakaurtseva, Head of Diplomacy and Consular Services S. Ivanov, and Head of International Relations and Public Affairs M. Belyakov.

In considering the relations between our countries at the present stage, Edgar Savisaar said: "Recently, the relationship between Russia and Estonia has managed to reach a very important step. On February 18th, a border agreement between Russia and Estonia was signed in Moscow. It bears the signatures of the foreign ministers of both countries: Sergei Lavrov and Urmas Paet. After signing, the agreements will be ratified by the parliaments of both countries.” According to Edgar Savisaar: "the Border Treaty between Russia and Estonia is a guarantee of good neighborly relations and gives positive signals for the  development of different relations in all areas: business and tourism, culture and education, and cross-border cooperation. In recent years there has been a trend of building positive and constructive relations between Russia and Estonia at the highest political level," said Mr. Savisaar. The Rector of the Academy, Yevgeny Bazhanov promised the audience at the speech by the Mayor of Tallinn, that Mr. Savisaar’s speech will be published in full in the journals “Foreign Service” and “Student Gazette".