Multipolar balance or a shift to dangerous bipolarity? 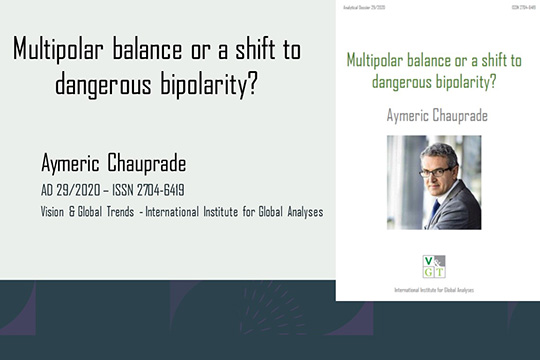 Periods of crisis give intellectuals a unique opportunity to gain recognition through original ideas. Each has his own prediction of the “world after” and, as a rule, there is a form of unanimity in believing that nothing will ever be the same again. This has been the case with every crisis, the oil shocks, the American wars, the terrorist attacks of September 11, 2001, the shock of the Islamic state and today that of Covid-19. Could the Covid-19 crisis be the famous “black swan” made popular by the brilliant book written by the Lebanese economist Nassim Nicholas Taleb? The “black swan” is the bird that you have never seen and that you do not expect to see one day; the unthought and unthinkable bird, as the symbol of the aberrant event that transforms History, not only because it is aberrant but also because of the tremendous impact of its emergence.

And yet Covid-19 is definitely not the black swan. The impact of the emergence and expansion of this coronavirus is certainly tremendous, but the nature of this event was predictable. Coronaviruses are known and experts have learned, at least since the 2002-2004 SARS crisis in Asia, that an avatar of the coronavirus family would someday lead to a global pandemic. A large number of reports from western intelligence services or from experts in the strategic domain had warned of the high probability of such an outbreak. Asia was prepared; neither China, Singapore nor South Korea gave in to panic.

Aymeric Chauprade is a French geopolitologist born in 1969. He holds a doctorate in Political Science from the Sorbonne, a graduate of Sciences Po Paris, holder of a license in Pure Mathematics. He has published several landmark geopolitical works, including Géopolitique, constantes et changements dans l’histoire, 3e éd. 2007, Dictionnaire de géopolitique (avec François Thual), en 1999, and Chroniques du choc des civilisations, a geopolitical atlas published in 2009, 2011, 2013, and 2015.

He headed the Chair of Geopolitics at the École de guerre française for 10 years, and is a visiting professor at several universities around the world. He is also a reserve frigate captain of the French Navy and specialist in maritime geopolitics, a regular contributor to the magazine “Marine & Océans”.